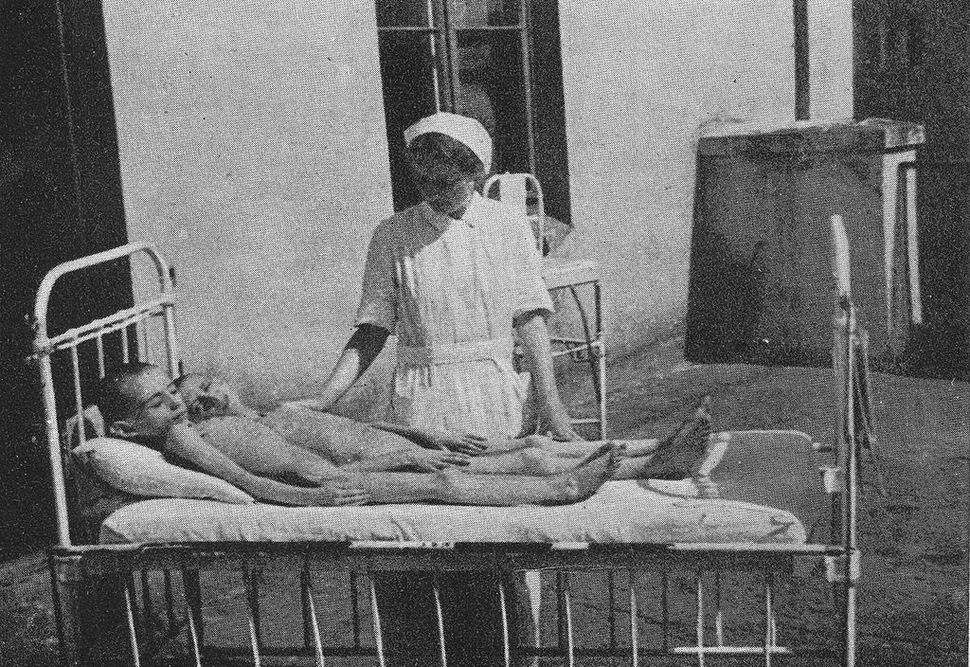 My daughter is a nurse in Teaneck, New Jersey, an early epicenter of the COVID-19 pandemic. My daughter-in-law is a nurse in an upstate New York town where hospitals are raided for protective gear and ventilators because it hasn’t hit hard yet. My go-to doctor and my husband’s cardiologist are in Teaneck. My neighbor works at a healthcare service here in the Poconos. Friends in Brooklyn, Manhattan and Teaneck have the disease, and relatives of friends have died.

This nightmare unfolds on my computer screen, the same screen on which I recently edited a book about the hospitals, doctors, nurses, pharmacists, medical students and patients in the Warsaw Ghetto. That’s not the only connection.

Last Friday, I got a text from my neighbor: “Do you have fabric and buttons our mask maker can use to make them for staff on the frontlines?” I gathered 100% high-count cotton sheets I didn’t need, a box of buttons, and texted her to pick up the paper bag on the front deck. She came wearing gloves, and I was reminded of a passage in the Warsaw Ghetto doctor’s book describing how the Judenrat collected linens for the hospitals in the Ghetto.

The story is complicated. Basically, the best, most modern hospital in Warsaw, the Czyste Old Jewish Hospital, was ordered to move behind the wall into a bombed-out building during the typhus epidemic — a recurring epidemic that gave the Germans the excuse to separate the Jews from the rest of the population.

There were almost 1,000 doctors, and their leaders were the cream of the crop, among them people who had converted to Christianity for the sake of employment between the wars.

Less than one in ten survived.

Czyste and Bersohn and Berman Children’s Hospital were the main centers for healthcare in the Ghetto, reduced to horrifying conditions by constant deprivation. The municipality of Warsaw, under German orders, cut off supplies. They also cut off help from the American Jewish Joint Distribution Committee.

People were doubled up in beds or on the floor. There was no protective clothing. Medical personnel caught typhus. Many died. There were no linens, dressings, and hardly any medications. You needed a prescription for soap. Pharmacists created concoctions or smuggled drugs in. Prices went through the roof.

And yet, they resisted. The doctors organized an underground medical school to train people to be medics. They researched hunger disease and looked for ways to treat it with what little they had, because the cure — food — was not available. Doctors or personnel who complained to the Germans or asked for help were deported or shot.

But the worst of it was that because of all the shortages, because of the lack of medicine, despite all they did to save lives, these brave doctors and medical personnel also had to make that choiceless choice: who lived, and who died. At the worst of times, it meant helping infants, children, the elderly and the disabled to die, to spare them the terrors of deportation.

I sit in the comfort of self-isolation in the Poconos, watching emergency room professionals and military leaders get fired for pleading for ways to save lives. Heroes on the frontlines are wrapped in plastic garbage bags, because they don’t have what they need.

Gurneys and hospital beds packed into hospital hallways. There are beds in Central Park, in ships, in school dorms, and in convention centers. But it is not enough, and the doctors cannot treat everyone.

There are local leaders who try to reassure their constituents and martial resources, but they are at the mercy of national leaders who scoff at science and who for no conceivable reason pit states against each other for supplies, causing prices to skyrocket. The desperate need for testing, ventilators and medication, treatment and vaccines seems secondary to profit.

As a result, medical personnel, as well as patients, are dying.

Here is the worst part: Because of politics, incompetence and profit, doctors are forced to make the same choiceless choices as their peers did in the Warsaw Ghetto. They must decide who lives and who dies.

Physicians, nurses, police and firefighters, groceries clerks and delivery people are dedicating their lives to the rest of us. We must be grateful to them. But unlike their predecessors in the Warsaw Ghetto who worked under a regime dedicated to their destruction, America should be able to provide these people with the resources they need to fight this pandemic. Where are they?

Jeanette Friedman lives in the Pocono Mountains and is a journalist, editor and publisher. She is the editor-in-chief and publisher of The Wordsmithy.