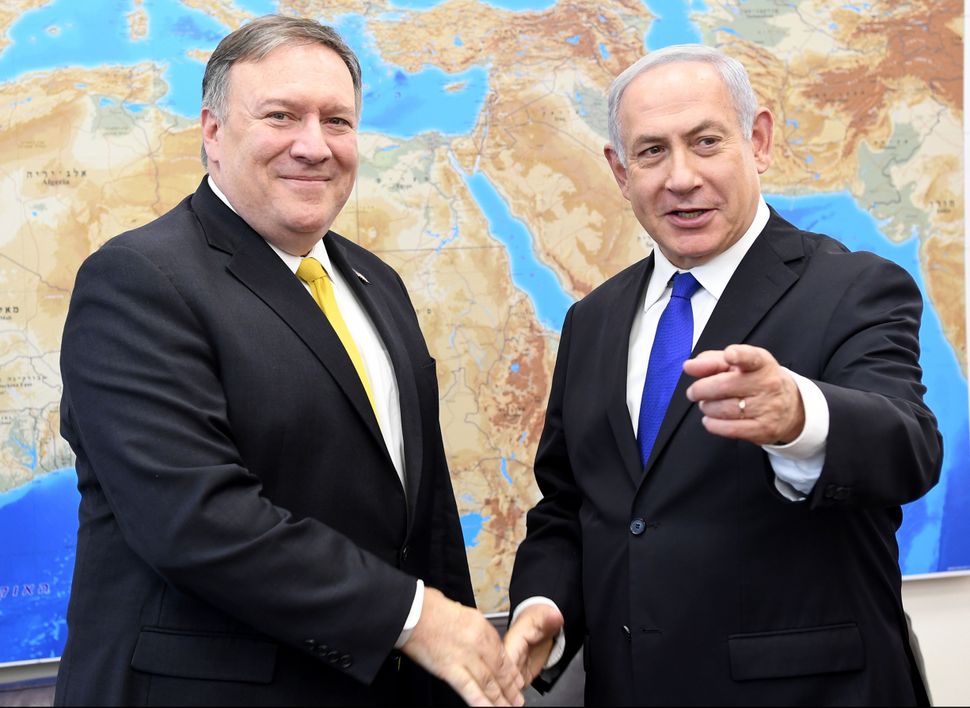 There is much speculation about why Secretary of State Mike Pompeo chose to visit Israel this week amidst a worldwide pandemic. Management of relations with an ally – especially with one of the few countries that has benefited from having Trump in office, as opposed to a more traditional or normal administration – did not require this trip.

So why did Pompeo specifically seek in-person meetings with Prime Minister Benjamin Netanyahu and incoming “Alternate Prime Minister” Benny Gantz, who will also serve as the country’s Defense Minister? Two of the messages that were apparently delivered, American support for Israel’s targeted attacks against Iranian interests in Syria and concern about the bid of a Chinese company to build a desalination plant south of Tel Aviv, were hardly breaking news for Israel. And significant international crises have certainly been dealt with on secure telephone lines.

Speculation is a risky game and we probably won’t know the full justification for this trip until the memoirs and papers of those involved are published. But we do have a few helpful facts to consider: This was the week Israel’s new two-headed government was supposed to be sworn in. The government is built on the foundations of a coalition agreement that allows the cabinet and the Knesset to begin considering annexation of parts of the West Bank, to which the Trump administration gave its backing as part of its “Peace to Prosperity” plan released in January.

Could the purpose of Pompeo’s trip have been to provide an exit strategy for an annexation that Netanyahu does not actually want and does not serve America’s foreign policy interests in the slightest?

While Netanyahu is associated with Israel’s hawkish right, he has never been an enthusiast for annexation. As Haaretz’s Anshel Pfeffer wrote in a perceptive column last week, Netanyahu has done little to pave the way for annexation in his tenure as Israel’s prime minister, the longest in the country’s history. One minister quoted in the article said, “Bibi could have pushed for annexation from the moment Trump was inaugurated. He didn’t because he doesn’t really want to. He remembered annexation only when the elections came.”

What was different this time, and hence the real panic about annexation, is that the U.S. deprived Netanyahu of the best argument he had against annexation: that it would harm relations with the U.S. By endorsing annexation ahead of time, the administration arguably swung the balance of power on the Israeli right toward the settlers and away from Netanyahu, who has long been content with maintaining an ambiguous status quo in the West Bank.

The Trump administration may have realized the folly of backing annexation, and recent statements and actions by American officials suggest Pompeo may have bailed Netanyahu out of a nasty mess of Washington’s own making. Earlier this week, before arriving in Jerusalem, Pompeo began equivocating on annexation, refusing to say whether or not the administration still planned to back annexation. The next day, a State Department spokesperson told the press that they expected Israel to take “a while to come together with what they’re going to do,” hardly welcome news for supporters of annexation who want Israel to act quickly while Trump is still in office.

In the clearest demonstration of an American walk back on annexation, the State Department today said such a move “should be part of discussions between the Israelis and the Palestinians.”

Pompeo’s trip, alongside messages telegraphing American disquiet about the rush to annex, may have been enough to provide the prime minister a way out of this mess, should he still desire it.