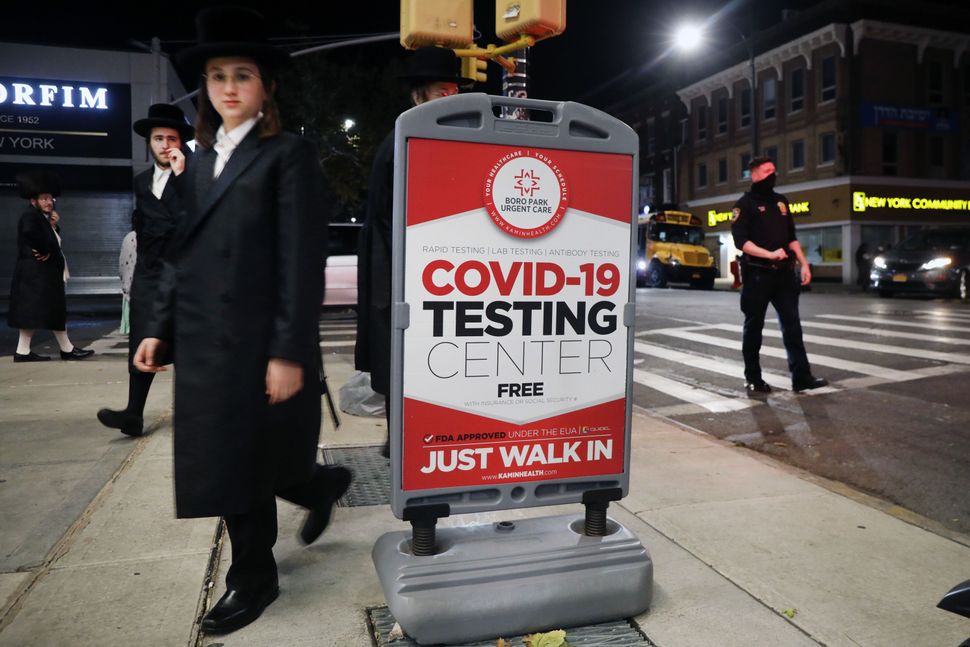 NEW YORK, NEW YORK - OCTOBER 07: A COVID-19 testing site stands in the Brooklyn neighborhood of Borough Park on October 07, 2020 in New York City. Borough Park is one of numerous Brooklyn neighborhoods that are witnessing a rising number of COVID-19 cases as New York City continues to trend down to around a one percent overall infection rate. Many of the neighborhoods experiencing a spike in cases are Orthodox Jewish neighborhoods which have had issues with authorities in limiting large funerals and weddings. New York City Mayor Bill de Blasio has announced plans to close nonessential businesses and schools in nine neighborhoods where positive COVID-19 rates have been higher than 3 percent. (Photo by Spencer Platt/Getty Images) Image by Spencer Platt/Getty Images

Rising cases of COVID-19 in New York’s densely Orthodox neighborhoods, and the protests there that followed city and state lockdown measures, have inspired a spate of recent public statements and articles urging the Haredi, or ultra-Orthodox, community to take the virus more seriously. The authors are generally Jewish, whether Haredi, modern Orthodox, or non-Orthodox, and their tone has ranged from pleading to accusatory. These and other authors have also written innumerable angry and sad Twitter and Facebook posts lamenting Haredi behavior in the face of the pandemic.

There is no doubt that masking, distancing, and avoiding large indoor gatherings can cumulatively make a huge difference in reducing spread of the coronavirus. And it is likewise indisputable that many in the Haredi community have chosen not to take these measures seriously, contributing to many lost lives (although it is also true that this attitude is far from universal among Haredim, a fact lost in most of the media coverage).

But my message is not directed at the Haredi community. I want to talk to the writers and posters, and it is precisely because the stakes are so high — literally life and death — that I feel the need to address you. I have no doubt of your sincere intentions. I am sure that you are motivated by a concern for the well-being of Haredim. But please consider that your writing may be having a very different effect than you intend.

The sheer number of think-pieces devoted to lambasting and lamenting New York’s Haredim, a highly visible and poorly understood cultural minority, has been extraordinary. Far more ink has been spilled on Haredim than on any other subset of the region’s population, even though they are hardly the only New Yorkers, or Americans, to resist government lockdown measures.

Who exactly are these pieces speaking to? Do Haredi Jews read The Forward or New York Magazine? Will the major Haredi rebbes and roshei yeshivas who instruct their supporters ever see your missives? Will anyone in the Haredi world who does see them be persuaded?

Have you ever seen people who are called out in public respond well? I have never seen such a thing.

Instead of reaching Haredim, these pieces’ most obvious impact is to reinforce negative views about Haredim to these publications’ non-Haredi readers.

I am Orthodox, though not Haredi, and I, personally, would be just fine praying alone in my home all year. But I am not so arrogant as to assume that everyone else feels the same way. For some, praying with a minyan strikes at the very heart of their identity. Simchat Torah for me is an opportunity to hide in the corner with a sefer (religious book), but for some, the holiday’s traditional exuberant group dancing offers a wellspring of spiritual sustenance that lasts the entire year.

Jewish theology is a complicated animal — leading Jewish thinkers can have totally different takes. Listen to Forward contributer Abigail Pogrebin discuss the complexities of God with Yehuda Kurtzer on his podcast here.

Before arguing that Haredim must radically change their religious practices, you have to first recognize how important these practices are to them. You have to genuinely empathize and persuade through friendship and good will.

The Haredi community has been pilloried over the last few years, in particular by people who want to tell them how to behave for their own good. Many of these critics are sincere, but they are operating from a place of denigration rather than empathy. This has put the Haredi community on defensive footing.

When Mayor Bill de Blasio of New York marched in Black Lives Matter protests maskless while shutting down Haredi funerals, many Haredim found it hypocritical — or came to the conclusion that the coronavirus was not as serious a threat as it had seemed. When de Blasio said that comparing the protests to communal prayer was like comparing “apples to oranges” because the protests had “real meaning,” his credibility was shattered. If you don’t take seriously how much meaning communal prayer has to Haredim you’ll never be able to convince them to change their behavior.

When all you do is “call out” the community, you are not doing anything except furthering a legitimate sense of persecution. You are not speaking to them, but about them.

And while you do so, you are often actually speaking to outside audiences who are already hostile to Haredi Jews. Your writings may unintentionally further antisemitic beliefs and be used to justify antisemitic behavior.

There is nothing so validating to antisemites as the ability to point at “insiders” and say, “see, even other Orthodox Jews agree the Haredim are spreading disease.” The nuance that you may intend will be lost on them, and instead of helping, you could be fostering another deadly attack like those we saw in December in Jersey City and Monsey, N.Y.

We live in deeply fractured times, and there are real and very serious issues tearing Haredi (and other American) communities apart. This is a time to help others, and helping must begin with understanding.

Go into Borough Park or Williamsburg and gently hand out masks in shul to any who will take them. Go talk to the rebbes, set up meetings with frum doctors and roshei yeshiva. Call up communal organizations and petition them. Find the large mass of Haredim who are serious about medical guidelines — they exist, I promise! — and work with them to push for change in their communities.

There are people doing this already, they just don’t write about it in The New York Times. Be one of them! This is the most useful way to get people to change their behavior, and to save lives.

Moshe Krakowski is an associate professor and director of the masters program in Jewish education and administration at Yeshiva University.