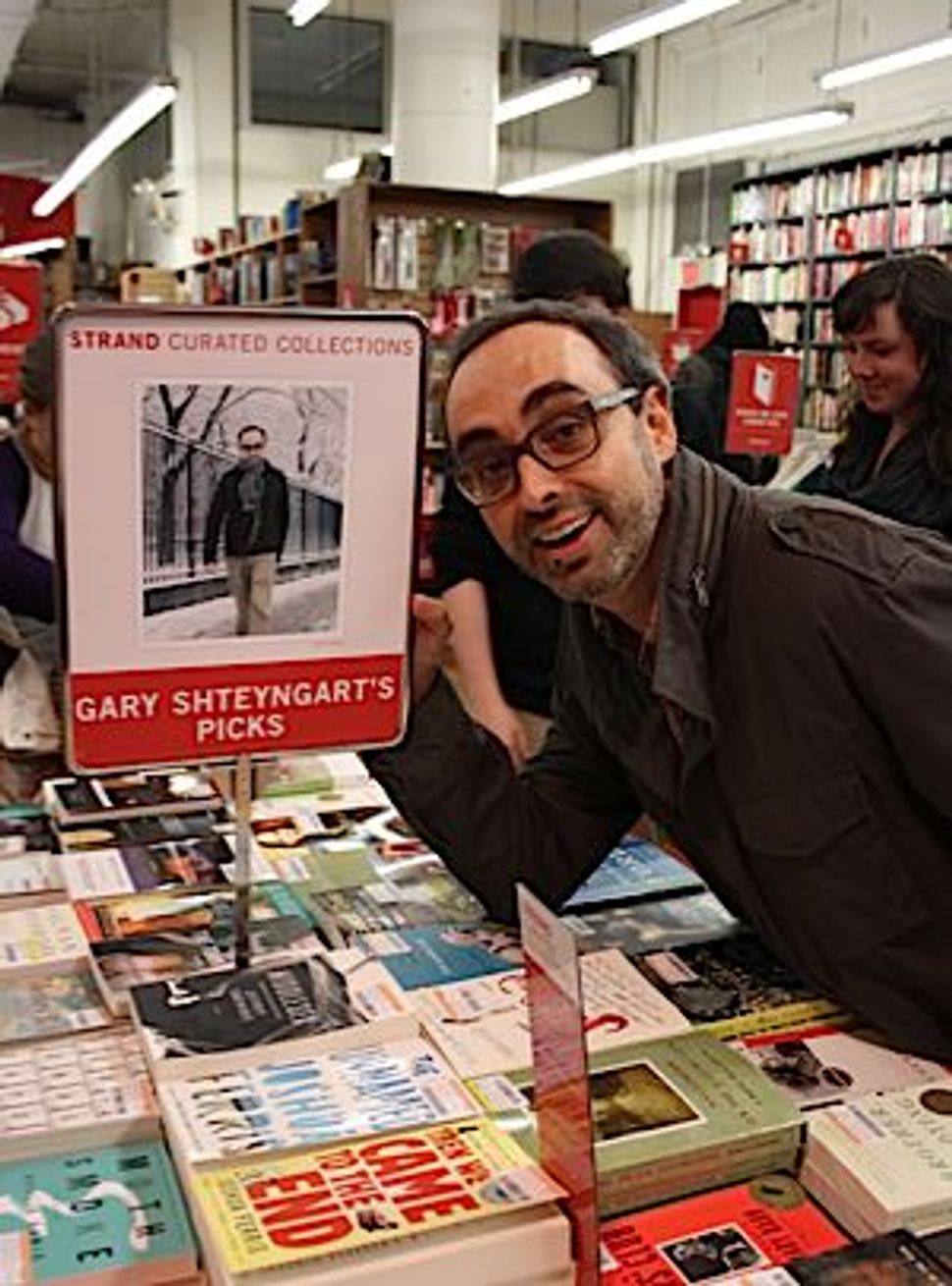 The Strand Book Store in Greenwich Village has set up a display in which well-known writers take turns exhibiting their favorite books. In June, it looked as though a bookcase in Gary Shteyngart’s living room had come to life, strolled into the book store, and tripped, dropping all its contents neatly onto a table.

Shteyngart has bonded with the store. As he writes on the store’s website: “When I was a half-starving New York writer (1995-2002), the Strand offered salvation in its 50% off aisles, cast-off reviewer copies that lined my first IKEA bookshelves.” He adds: “I will never forget the days of saving up two $20 bills to score a whole bagful of books from the Strand, my stomach filled with cheap hot dogs and a poor man’s version of Pepto Bismol…”

For commentary on Shteyngart’s list, I turned to novelist and essayist Thane Rosenbaum, who is the John Whelan Distinguished Lecturer in Law and Director of the Forum on Law, Culture & Society at Fordham University School of Law.

“It is interesting given Gary’s reputation as a leading light among the new wave of Russian writers, that his choices are weighted toward so many contemporary writers,” he noted. “One would think that he would be recommending Dostoevsky, Tolstoy and especially Babel, whose Jewish wit and outsider’s perspective is so poignant and present in Gary’s own fiction. Instead, he includes an obscure Nabokov title, a book from Sorokin, himself a contemporary Russian post-modernist, and essays from Joseph Brodsky, who many read as an American writer.”

Pulitzer-winning graphic novelist Art Spiegelman was the first writer to have a curated table at the Strand. Asked for comment on Spiegelman’s choices, graphic artist Ben Katchor observed that they indicated an interest in both contemporary as well as historical picture-stories. “One can see Spiegelman finds both of these more interesting than prose fiction,” he noted. (Katchor’s book “The Cardboard Valise” is on Spiegelman’s list.)

Derek Parker Royal, a professor of English at the University of Nebraska Kearney, also weighed in on Spiegelman’s choices. “Looking at this list of books, there is one thing that strikes me. They are what you would consider ‘serious’ or ‘alternative’ or ‘adult’ comics, not the kind of mainstream stuff you’re apt to find published by DC or Marvel.”

Royal, who has written scholarly articles on ethnic tensions in Will Eisner’s ““Dropsie Avenue” and Michael Chabon’s construction of history in the “Escapist” comics, said that while he owns most of Spiegelman’s choices, he would also have chosen “a variety of superhero titles and other mainstream works.”

In addition to choosing books for display at the Strand, Spiegelman had a hand in creating the concept to begin with. The idea came from a conversation he had with the store’s director of events and marketing, Christina Foxley. Spiegelman said he sometimes knew of interesting books that were not in the store but that would be great to see there. “Give me your wish list and I’ll pass it along to the buyers,” said Foxley. “Then I thought, ‘Wait a second. I bet our customers would like to know what your wish list is.’”

Currently, Pulitzer Prize-winner Jennifer Egan’s picks are in the store, with Nora Ephron slated for later this month. And those who live outside New York City need not worry — all of the authors’ choices are on the Strand’s web site. For book browsers everywhere, these curated tables allow them to better understand their favorite authors’ taste in literature. And to judge it, as well.