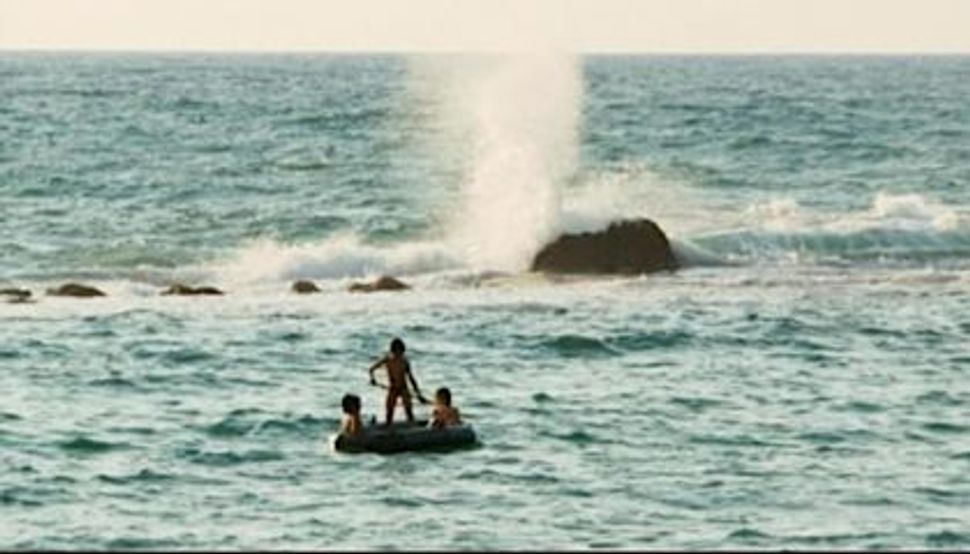 Image from “The Boat,” directed by Nir Bergman in “Sharon Amrani: Remember His Name.”

Ten years ago, on September 8, 2001, a young man drowned in the Mediterranean, just off Manta Ray beach in Tel Aviv. “Bonfire Night” (1998), his graduation film for the Sam Spiegel Film & Television School Jerusalem, tied with fellow classmate Nir Bergman’s “Seahorses” for first prize; an earlier student film, “Imma Mitchatenet Im Avram” (1997) accrued praise as well. He had directed the pilot for the television program “Meurav Yerushalmi,” and had made a witty commercial for Galatz, the IDF radio station, featuring a rocking yeshiva bokher. He had yet to make his first feature film. His name was Sharon Amrani.

Amrani’s films had already awakened the interest of film critic Yair Raveh, who admired the “uncompromising honesty” of “Bonfire Night,” and saw it as a harbinger of a more emotional, personal style in Israeli film. Raveh wrote an article commemorating Amrani’s life and work that was scheduled to headline Ha’ir (The City) magazine. The next day was September 11, 2001. The article receded to the back pages of the magazine, but Raveh did not forget Amrani, and in his observations of the Israeli film scene and its resurgence in the past 10 years he has reflected on how it was forever altered by Amrani’s absence. These musings in turn became a documentary film.

“Sharon Amrani: Remember His Name” (2010) reveals the young charismatic filmmaker and his work through clips from Amrani’s films, interviews with family, friends, colleagues and teachers, as well as photographs and home movies from Amrani’s childhood. The film premiered at the 2010 Haifa International Film Festival, and was shown on September 10 on the Yes Docu channel to commemorate the 10th anniversary of Amrani’s death.

The sense of loss conveyed by “Remember His Name” is enormous. As his contemporary Dover Kosashvili says in the film: “Many people die and you can’t really know how big our loss is, and with Sharon you know. It’s like I were to die before making ‘Late Marriage.’”

Raveh does not only document the past, he documents a future that will never be, and the films that Amrani did not live to create. Researching Amrani’s documents, Raveh found several short screenplays, and sought out three directors of Amrani’s generation to bring them to life. The short films are interwoven throughout the documentary — “The Boat,” directed by Nir Bergman, “Albert and Ronit,” directed by Dover Kosashvili, and “Sabbath Eve,” directed by Joseph Cedar. The warmth, intensity and drama of family life; issues of Persian ethnicity; tradition and the desire to break away from tradition; the competition and camaraderie of boys and men; the search for love; a persistent spiritual search and a love of the sea — all these are reflected in the brief yet intriguing vignettes, imbuing the film with a sense of Amrani’s vision as a filmmaker and how his presence might have influenced the Israeli film scene.

Renen Schorr, Head of Sam Spiegel, speaks in the documentary of Amrani’s charisma; Kosashvili, recalling their first meeting at a student film festival, calls him “a tiny Persian prince who can run the entire show”; a fellow classmate from the yeshiva where Amrani studied for a year before beginning film school speaks of his “raging sobriety” and Sam Spiegel classmate Binyamin Hiram recalls Amrani’s devotion to every detail in the making of his films, how he checked out every alley in the Hatikva neighborhood of Tel Aviv before deciding on the locations for his student film “Imma Mitchatenet Im Avram.”

“Remember his Name” has an unswerving honesty that examines Amrani’s life in all its contradictory aspects. The complex relationship between life and art is at the film’s core, acutely expressed in a scene directed by Gili Gaon. When Raveh asked Gaon, who was married to Amrani and with him on the day of his death, to tell him about the experience, she chose to tell the story in film.

As with the other dramatic sequences, the film within a film is shown in its entirety, but interspersed at other junctures are scenes as they are being filmed: the boom microphone poised over the crowd on the beach, cameras, someone holding up a large white board to reflect the light. There is the golden sunlight, the wide sea and sound of the waves, the actors, crew, and equipment of a movie set; the beauty of nature, the beauty of artifice and the attempt to understand a life, while also acknowledging its mystery.