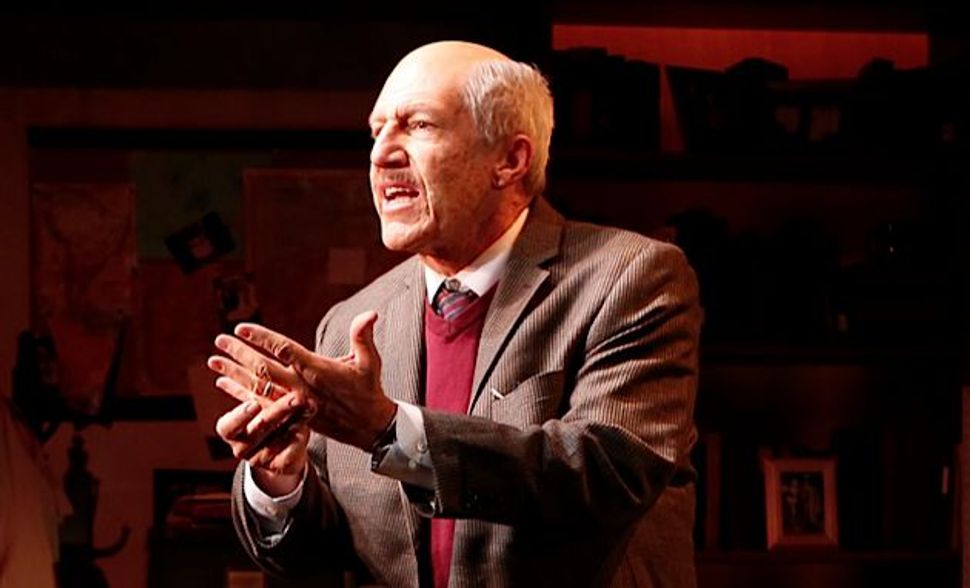 In Tom Dugan’s play, “Wiesenthal,” the title character, Simon Wiesenthal (played by Dugan), describes a conversation with his wife, Cyla. She is ill and wants Simon to quit his work as a Nazi hunter and take her and their daughter to live in Israel.

Wiesenthal explains that he can’t:

“When we all meet in the next world, those who died in the camps will say, ‘Tell me what you did with this gift of life?’ One will tell of becoming a doctor; another a jeweler or a banker. When they ask me, I will say, ‘I have never forgotten you.’”

Then there was the time his 8-year-old daughter, the only Jew in her school, came home and asked why all the other children have family to spend holidays with. “Why do I have no one to visit?”

These are moments that will register with people of a certain generation. This play is important because there are other generations for whom this won’t register at all.

Unfortunately, emotional dialogue aside, the rest of the production comes off more as a dry history lesson than as an inspirational drama, lessening any potential impact it might have. The setting is Wiesenthal’s office at the Vienna Jewish Documentation Center in April 2003. It is his last day there and the show’s conceit is that one final group of visitors has come to hear him speak — or more accurately, recite.

And recite he does. He goes through his early days as an architect, losing and miraculously finding his wife, his time in several camps and going on the trail of and eventually helping to capture 1,100 war criminals. It’s all tied in too neat a bow, as though Dugan is a runner making sure to touch all four bases on his way home.

The problem is inherent in the one-man, one-set format. There is very little for Dugan as an actor to do. He tells cinematic stories with no visual support. He wanders seemingly aimlessly around for no apparent purpose other than to provide a modicum of movement.

Dugan as a playwright doesn’t help. To leaven the effects of the emotionally charged moments, he offers some awkward dialogue: “Perhaps you have heard of the Warsaw uprising?” Really?

Another problem is that Wiesenthal has lived a life so large it’s difficult if not impossible to condense into a 90-minute show. Moreover, much of the historical record seems unclear; Wiesenthal has apparently contradicted himself in several of the books he wrote.

Ironically, the story behind Dugan’s play — Dugan was inspired by his father, a soldier who helped liberate the Langenstein camp — is more interesting than the play itself.