Barack Obama Gets Cameo in Jerry Seinfeld’s ‘Show About Nothing’ 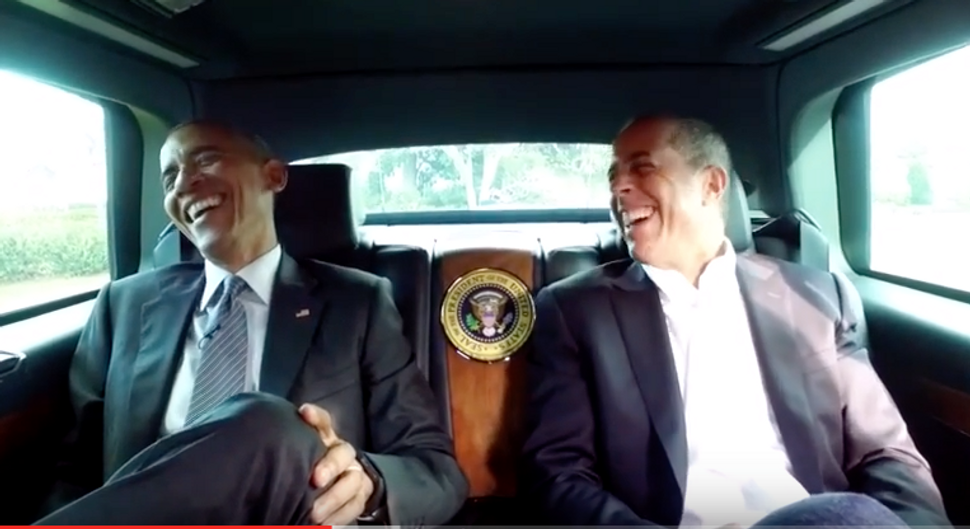 They didn’t leave the White House grounds and coffee was drunk in a staff dining room, but comedian Jerry Seinfeld took U.S. President Barack Obama out for short spin in the latest episode of his popular web series “Comedians in Cars Getting Coffee.”

In his latest pop culture venture, Obama filmed a special guest spot for the series streamed on Crackle. Each 20-minute episode features Seinfeld chatting informally with a different comedian.

Obama has “gotten off just enough funny lines to get on this show,” Seinfeld said in the episode that hit the web late on Wednesday.

The former star of the hit TV comedy series “Seinfeld” chose a silver blue 1963 Corvette Stingray for the ride.

But for security reasons the pair had to be content with a few slow turns around the White House rather than the usual spin along the freeways of Los Angeles or the streets of New York.

Amid the small talk, viewers learned that Obama blows off steam by cursing, that his underwear is all one brand and one color, that he shaves before he works out and that his guilty food pleasure is nachos.

Seinfeld and Obama also talked about the drawbacks of fame versus anonymity, and Obama’s most embarrassing moment. “This may be it,” quipped the president.

The show follows Obama’s appearance earlier in December on the survival adventure series “Running Wild with Bear Grylls” in Alaska to highlight the dangers of global warming, his 2014 spoof interview for online video series “Funny or Die” to promote Obamacare and numerous appearances on TV chat shows while in office including “The Tonight Show,” “The Daily Show” and “The View.”

Barack Obama Gets Cameo in Jerry Seinfeld’s ‘Show About Nothing’