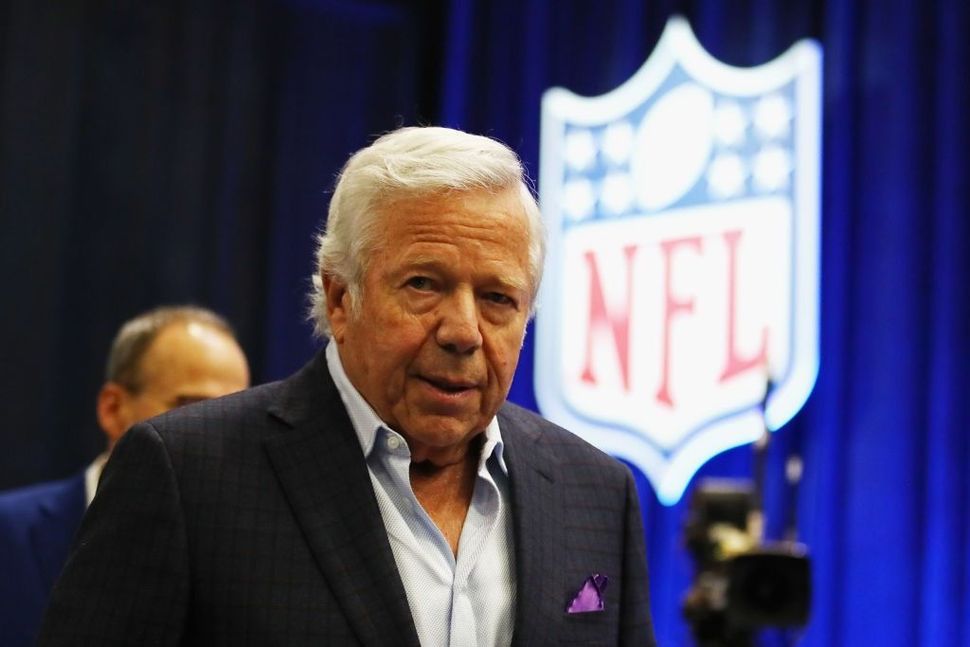 Robert Kraft, the billionaire owner of the Patriots and a major Jewish philanthropist, was charged on Friday in a prostitution sting in South Florida. Kraft, who is 77, was charged on two counts of soliciting prostitution along with 24 other people. Police say that incidents in which Kraft solicited prostitution were caught on hidden cameras.

Kraft was awarded the 2019 Genesis Prize this year, which recognizes Jews for extraordinary works, and gives winners $1 million to distribute to causes as they see fit. Kraft, who succeeds last year’s wildly contentious winner Natalie Portman, is still set to distribute the prize money to causes that will “combat anti-Semitism, efforts at de-legitimization of Israel,” according to the prize’s website.

Kraft is an openly observant Jew who has focused his philanthropy on Jewish causes, giving a reported half a billion dollars to charitable groups, with a focus on Jewish and Israeli organizations.

As the Kraft scandal unfolds, we feel moved to ask — does soliciting prostitution violate Jewish law?

As is often the case in Jewish law, the answer is: It’s complicated.

The Torah offers several examples of morally ambiguous or even heroic prostitutes — Tamar, who disguises herself as a prostitute and successfully solicits her deceased husband’s father for sex, so determined is she to have a child by that bloodline. Her father-in-law moves to have her burned to death for prostitution, until she reveals that she was the disguised prostitute he slept with. Not only is Tamar praised, Judah looks foolish. Later in the Torah, a non-Jewish prostitute, Rahab, shelters Israelite spies in her home, and in turn is saved when the Israelites ransack the city. The Torah draws one big line with prostitution, in Leviticus: “Do not degrade your daughter and make her a harlot, lest the land fall into harlotry and the land be filled with depravity.”

The Talmud also does not clearly condemn prostitution. Multiple times, Talmudic writers urge students to avoid physical proximity to prostitutes — founding Yiddish Forward editor Abe Kahan offered similar advice over one thousand years later. However, Dr. Judith Baskin writes that in the case of prostitution, the Talmud draws a halakhic line “between what is ethically preferred and what is legally permitted,” with prostitution falling into the second category. Visiting a prostitute, though frowned upon, and a possible opportunity for pitfalls like incest and ritual impurity, was not forbidden, though it was preferred that the prostitute was not a Jewish woman.

Two Talmudic texts that are frequently referenced in the Jewish debate about prostitution suggest that emphasis should be placed on optics, not actions.

“Better that a man secretly transgress and not publicly profane God’s name so that no one learns from his action,” according to Rabbi Hanina. “If a man sees that his [evil] inclination overwhelms him, he should go to a place where he is unknown, wear black clothing and cover himself with black, and do what his heart desires, so that he does not publicly profane God’s name,” argues Kiddushin 40A.

Modern interpretations of halakha generally take a much stricter view on prostitution. Sex outside of marriage is condemned, as is, by that same token, sex with a non-Jewish person. Rabbi Michael Gold explains that Orthodox Jews consider all sex outside of marriage as equivalent to prostitution. Sex for money is largely considered unethical by mainstream Jewish movements, though for years a minority group of progressive voices has advocated for legalizing prostitution and promoting the rights of all sex workers.

All mainstream Jewish movements generally reject prostitution, but ambiguity in the text and an understanding of the power of human desire makes space for people who have engaged in prostitution to return to their communities.

Perhaps a meaningful form of teshuva for Kraft would be giving to groups that work to battle human trafficking in the country he clearly loves so much? Just a thought.

Correction, February 23: An earlier edition of this article attributed a quote to Rabbi Danya Ruttenberg that was actually written by Dr. Judith Baskin. Rabbi Ruttenberg edited “The Passionate Torah,” the collection of essays from which the Baskin quote was sourced.