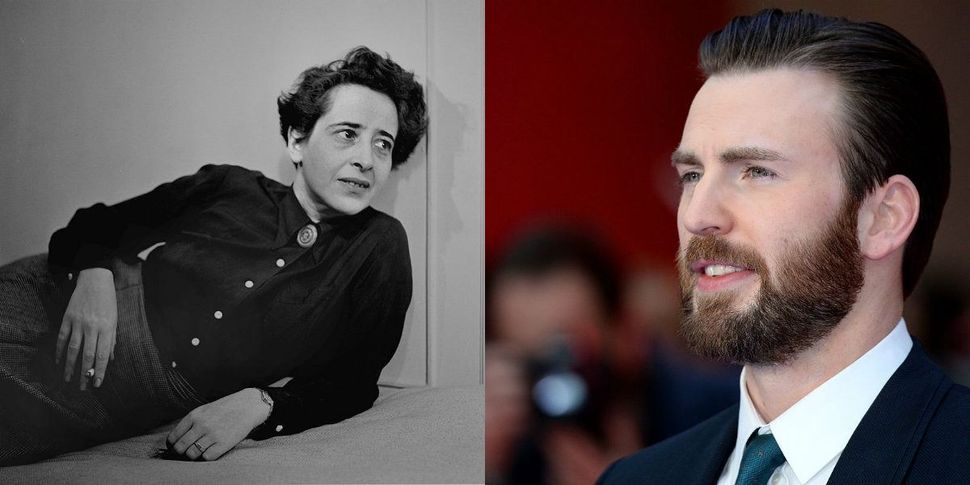 The Marvel universe has announced a follow up to its popular superhero ensemble films, to be titled “Avengers: The Origins of Totalitarianism.”

We kid, but you’d watch, right?

Captain America himself, actor Chris Evans, has discovered the 20th century German Jewish political philosopher Hannah Arendt, and he wants the world to know. Just under 140,000 fans of the Hollywood A-lister have been turned on to the famous chronicler of the Eichmann trials via a tweet Evans posted on Monday night.

The tweet in question features a photograph of a paragraph from Arendt’s 1951 work “The Origins Of Totalitarianism,” which analyzes the rise of totalitarianism through Nazism and Stalinism. The book, one of Arendt’s most famous, dissects the threads of 20th century totalitarianism, starting with its roots in anti-Semitism. In the paragraph he posted, Evans highlighted a specific quote: “Before mass leaders seize the power to fit reality to their lies, their propaganda is marked by its extreme contempt for facts as such, for in their opinion fact depends entirely on the power of man who can fabricate it.”

Oh, Chris! We love imagining him blinking his foot-long eyelashes so he can focus on Arendt’s reading of the anti-Semitic Dreyfus Affair! Did he, too, gasp over her peerless ability to drive language, tank-like, through centuries of anti-Semitic ideas? Did his heart pang with longing for his ex-lover, Jewish actress Jenny Slate, at each of Arendt’s 1,498 uses of the word “Jew” in the book? (Yes, that’s right, we looked it up.)

God speed in your education of the American public, Chris. We honor you now, by ranking Famous Hollywood Chris-es by how likely we think they are to have heard of Hannah Arendt:

“Clocks” is about Hannah Arendt.

Chris Hemsworth has never heard the word “Hannah” next to the word “Arendt.” However, if Hannah Arendt was alive, Hemsworth is the Chris she would most like to spend time with. That’s showbiz, baby.

Chris Messina has not heard of Hannah Arendt.