Sholom Aleichem Is Alive and Well 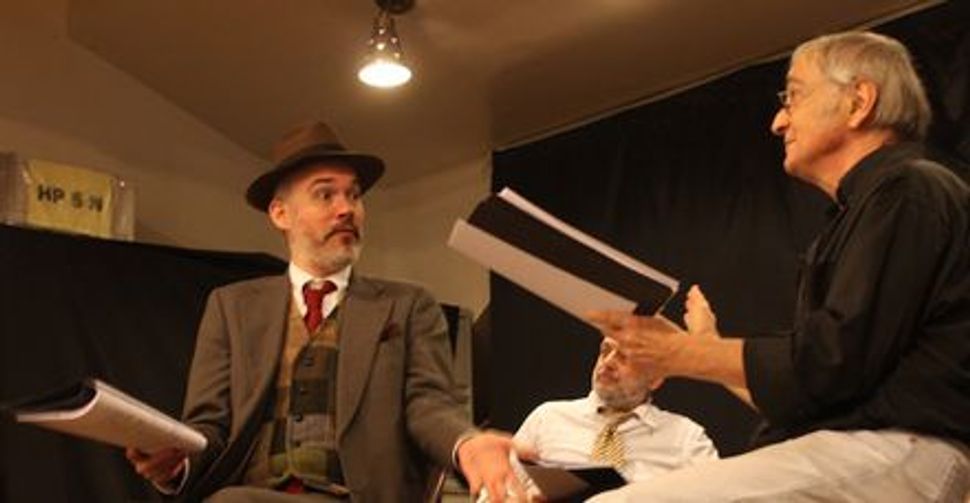 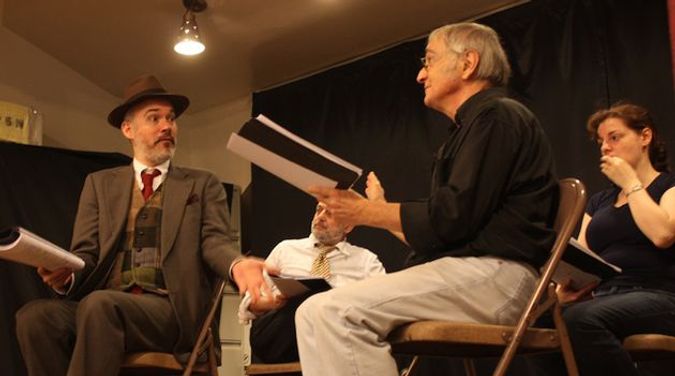 Bringing It Home: A New Yiddish Rep rehearsal of the one-act play ?Agentn,? based on the works of Sholem Aleichem, at the Sholem Aleichem Cultural Center in the Bronx. Image by nathaniel herz

Yarmulkes are a rare sight along Norwood’s Bainbridge Avenue, a busy thoroughfare at the heart of the Bronx neighborhood once dominated by Jews and Italians.

Today, the street is lined with shops and stores owned by a new, diverse group of immigrants. Residents can get their teeth cleaned by a Dominican dentist, purchase pastries from a Montenegrin bakery or pick up groceries at a Bangladeshi market.

One building, however, still displays Yiddish’s serifed, curling script on its marble facade. And inside, members of the Sholem Aleichem Cultural Center can be found speaking the language with the same fluency and passion that their ancestors did, centuries ago.

“You just have the feeling that you want a link to your past,” said Paul Glasser, 54, a Yiddish scholar at the YIVO Institute for Jewish Research in Manhattan, who has attended events at the center since the 1980s. “This is the only way I can do it, really.”

In mid-November, an audience of 50 gathered at the cultural center to see a play based on the works of Sholem Aleichem himself. Members of the acting troupe, the New Yiddish Rep, said that after having done previous performances for English speakers, they relished a crowd that was hanging on every Yiddish vort, or word.

“This is the real thing,” said Shane Baker, one of the actors. “It’s a different connection. You’re close to them — it’s not mediated through the supertitles.”

The theatergoers were primarily senior citizens; some had to grip the staircase railing with both hands as they descended to the auditorium.

“We all have grey hair,” said Rosalyn Saltzman, who would say of her age only that she’s “over 80.”

But there was a smattering of younger people, too, some from as far away as Brooklyn. Glasser was there with his wife and 7-month-old son, and a few rows up sat Amanda Siegel, 25, who has a Fulbright scholarship to translate Yiddish poetry in Argentina.

Founded in 1929 as a Yiddish folk school, the center persists as a stubborn bastion of the language — a place where it is spoken, not studied. While some of the Bronx’s other Yiddish institutions have withered, the center’s monthly lectures and performances draw an avid audience, from Holocaust survivors to students hoping to pick up a few new words.

“Neighborhoods change over time. Things shift,” said Robert Shapiro, a Yiddish scholar and professor of Judaic studies at Brooklyn College. “Bainbridge Avenue and the Sholem Aleichem center [are] kind of a fortress.”

In the first decades of the 20th century, Yiddish flourished among New York’s secular Jews. At one point, the language filled half a dozen different daily newspapers, and residents could tune in to more than 20 Yiddish radio stations.

There were also several networks of secular Yiddish after-school programs, aimed at teaching children the language, history and folklore of their ancestors. Each network had branches scattered throughout the city; the Sholem Aleichem Cultural Center began as one of them.

Through the 1960s and 1970s, Bainbridge Avenue was a hotbed for Yiddish, so much so that residents dubbed it Bainbridgivke. Several prominent Yiddish scholars raised their children there, including linguists Joshua Fishman and Mordkhe Schaechter and folklorist Beyle Schaechter-Gottesman.

By the 1980s, though, the number of young Jews in the area had dwindled to the point that the school could no longer sustain itself, and the building was converted into a center for Yiddish language.

Norwood has seen its Jewish population plummet, like other neighborhoods around the Bronx. A 2002 survey estimated there were just 45,100 Jews in the borough, down from 600,000 in 1945.

Some pockets remain, in neighborhoods like Riverdale and Parkchester. But the vast majority of the city’s estimated 88,000 Yiddish speakers now reside in Brooklyn, and many of those are members of Orthodox communities.

There’s little nostalgia or pessimism about the language among the members of the Sholem Aleichem Cultural Center, though — they’re too busy speaking it.

“There are other places that have things about Yiddish. This is in Yiddish,” said Itzik Gottesman, 54, who grew up on Bainbridge Avenue as one of Schaechter-Gottesman’s children and is now associate editor of the Forverts — and the center’s president. “The very fact that it’s in Yiddish implies our approach, that this is a living language and not something of the past.”

Each month, the center holds a cultural program exclusively in Yiddish — usually a 40-minute lecture followed by a musical performance, though the center will also host theater or films, with English supertitles for non-Yiddish speaking visitors on very rare occasions. Lecture topics have included the psychology of Jewish humor; the history of the Morgen Freiheit, a defunct communist Yiddish newspaper and even the broader points of Maori culture.

The not-for-profit cultural center is on sound financial footing: It owns the building it’s housed in and rents space to the continuing medical education department of nearby Montefiore Medical Center. Its lecturers and performers are compensated with a “reasonable fee,” Gottesman said, and the center pays travel expenses for some of its guests.

Events take place in a basement auditorium filled with vestiges of Yiddish art and culture.

At one end of the hall, shelves are stacked with hundreds of Yiddish books with peeling dust jackets; at the other is a narrow, warmly lit stage, with boxes of Montefiore’s files hidden behind a black curtain. The setting, to borrow a Yiddish word, is “haimish,” said Aviva Astrinsky, 73.

“It feels homey,” she said.

Astrinsky, a Manhattan resident, said she has been coming to the center for 12 years; she learned Yiddish “by osmosis” from her grandparents when she was growing up in Israel.

“I love the language, and I think it deserves to be alive,” she said.

Nathaniel Herz is a student at Columbia University’s Graduate School of Journalism.

Sholom Aleichem Is Alive and Well