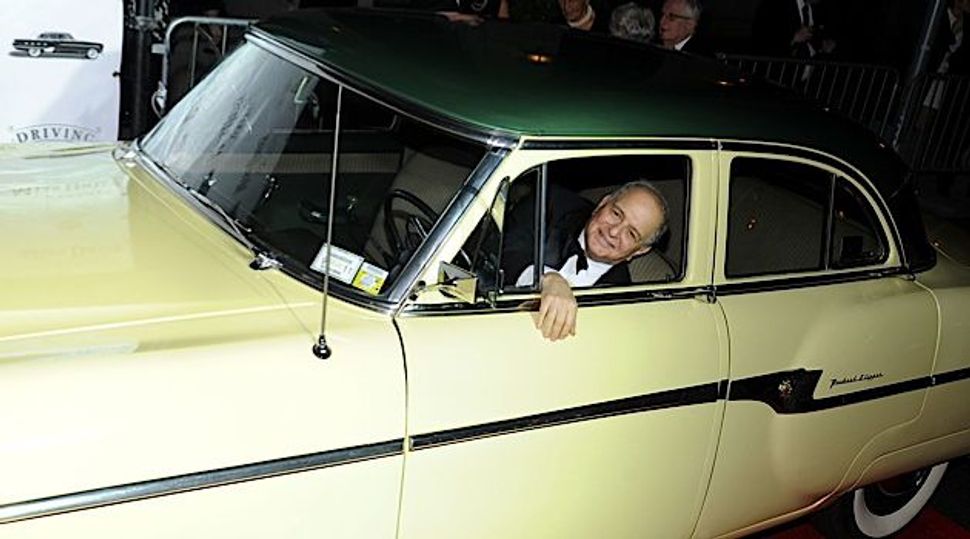 Driving Mr. Uhry: The playwright at an opening night party for the 2010 Broadway revival of ?Driving Miss Daisy.? Image by Getty Images

Alfred Uhry is taking a break from a rehearsal of his new play, “Apples and Oranges,” and he is telling a story about his mother. His avuncular voice shifts to hers: “Just think, Alfred,” he drawls sweetly, evoking a moment in 1989 when he’d taken her to the movie set of “Driving Miss Daisy,” “you’re responsible for all these trucks.”

She was right — the production of the Bruce Beresford-directed adaptation of Uhry’s 1987 play had overrun part of the blossoming Atlanta neighborhood where the story, about the decades-long friendship between a Jewish matron and her black chauffeur, takes place. It’s also where Uhry’s parents raised him and his sister from the 1930s through the early ’50s; “Daisy” was based on the friendship between Uhry’s grandmother and her driver.

That Uhry’s mother lived to see his success — the film won four Academy Awards including one for Uhry’s screenplay — pleases him. At least in part that’s because he thinks he was, to his parents, “an enigma” — a Southern teenager who was enamored of Rodgers and Hammerstein and was a terrible athlete (“All the things that I liked go with gay, but I wasn’t gay”). He was a Jewish boy who, when he headed off to college at Brown, in 1954, says he didn’t know the difference between lox and bagels. (“There are Southern Jews that are very good Jews,” Uhry hastens to add. “Just not mine.”) 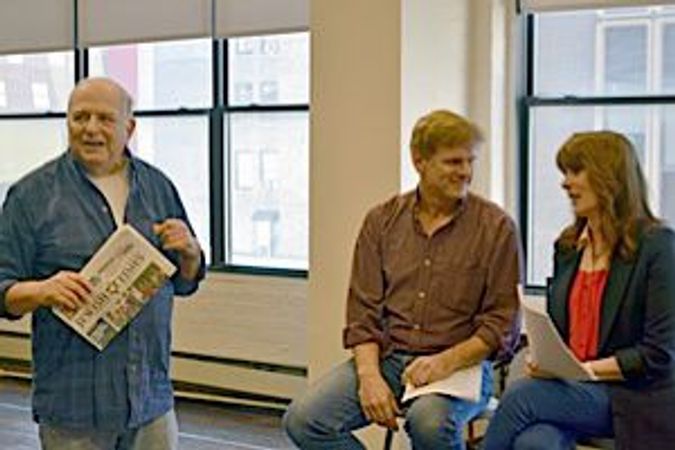 “Driving Miss Daisy,” Uhry says, “changed everything” for him; he spent lucrative years afterward writing for the movies and, at 75, remains busy with multiple projects. He is one of only a small number of writers who has won an Oscar, a Tony (two, actually) and a Pulitzer Prize. Now the playwright is headed back to his hometown with a world premiere of a new play, which shares elements with that first smash success.

The new play’s source material does not come from Uhry’s own life; it is adapted from Marie Brenner’s 2008 memoir, “Apples and Oranges: My Brother and Me, Lost and Found,” which centers on the fractious, volatile relationship between the author and her brother, Carl. The play offers an exploration of a complex relationship that affords an examination of familiar Uhry themes; here it’s Marie and Carl delving into their contentious past and present as they confront issues of life and death, along with ones surrounding Southern Judaism, family — and apple farming. The new play is, finally, about strong characters’ senses of self within worlds in which they don’t perfectly fit. The Brenners were raised in San Antonio, Texas, as secular Jews, but had each departed for an opposite coast for adulthood: Marie to become a successful, left-leaning East Coast investigative reporter; her archconservative brother to become a he-man farmer in Washington state apple country.

The book, with an extensive cast, international locations and great attention to apples, might not seem an obvious candidate for dramatic treatment, but Lynne Meadow, the artistic director of the Manhattan Theatre Club, called Uhry and asked him if he would consider it. Uhry saw possibilities, and what interested him in particular, he says, was that the memoir was about a sibling relationship that he happened to share: a single brother and a single sister. Same-sex siblings, Uhry posits, can share experiences differently than can opposite-sex pairs. With a brother and a sister, he suggests, “there’s not exactly the same way to relate. And you are, perforce, put on different paths.” He says he had never seen this dynamic explored in the theater, and “Apples and Oranges” provided the opportunity.

When Uhry’s sister, Ann Uhry Abrams, learned he was working on this sibling-focused work, she wanted to make sure it wasn’t about her. It isn’t: Although Uhry acknowledges that he and his sister weren’t always very close, they didn’t have the kind of volcanic relationship that provides the Brenner bond with its furious energy. Still, there are parallels that may have influenced the play. Like the Brenner siblings, Uhry and his sister wound up living in different places as adults; Uhry left Atlanta when he went to college and, while he returns there for his work, he never moved back permanently. Ann Uhry Abrams not only never left but, in fact, became a professional chronicler of her hometown: Like Marie Brenner, Uhry Abrams is a nonfiction writer; she has focused on Atlanta stories.

Also like the characters in “Apples and Oranges,” the Uhry siblings grew up Jewish in predominantly non-Jewish environs. Alfred and Ann’s childhood home, on the corner of Ponce de Leon Avenue and Clifton Road, was just south of the tony Druid Hills Country Club, which, during the Uhrys’ childhood, he recalls, was “restricted.”

Carl and Marie Brenner grew up in San Antonio, where, Marie Brenner writes of her father in the book, “‘Secular’ was his favorite word.” So as Uhry crafted the character of Carl from Brenner’s material, he was working with what he calls “a seriously lapsed Jew,” a description that connects to his sense of himself. “He’s further than I ever would choose to go,” he says of Carl, “but that’s his choice.”

Uhry says he doesn’t “exactly enjoy” the state of his own Judaism. “I’m a little envious and regretful that I don’t have more religion.” But it means that secularism like the Brenners’ is something he relates to. He cites a line from one of his characters in “The Last Night of Ballyhoo,” who says there is a “big hole where the Judaism is supposed to be.” “That was me talking,” he says.

“I’m sorry I wasn’t able to raise my children with religion,” he says, but this comes across as the kind of regret that a 5’4” guy would express for not being an effective power forward: more acknowledgment than apology. Uhry’s Christian wife, a professor at Fordham University, is the one member of the couple who, Uhry says, encouraged the family to “have Seders and all that stuff.” Of course, raising his kids as he did on Manhattan’s Upper West Side, where — as he puts it — “everybody is half-Jewish, at least” means that his kids weren’t entire ly shortchanged on their heritage. “They grew up culturally New Yorkers,” he says, “which is the same thing as culturally Jewish.”

And yet, despite all these echoes and reverberations of Uhry’s life and work, adapting “Apples and Oranges” proved to be among his harder assignments. And while he says he likes “the hard ones,” he is looking forward to several new projects that seem a bit lighter — a musical about Toulouse-Lautrec, for instance, built around a score by the indefatigable 88-year-old French megastar Charles Aznavour; and another musical, this one based on John Berendt’s 1994 book “Midnight in the Garden of Good and Evil.” Also, “Divine Intervention,” based on the 1997 nonfiction book “The Kidnapping of Eduardo Mortara,” about an Italian Jewish boy who was, apparently, baptized in 1857 by a family servant, was adopted by Pope Pius IX and was eventually ordained as a priest. (“There’s somebody that’s a worse Jew than me!” Uhry thought when he heard that story.) And finally, a play based on the Sinclair Lewis novel “Dodsworth.”

“Frankly,” Uhry says, “I feel like I’m very lucky at my age that people want me. I mean, most guys my age are watching the Golf Channel.” And that, it’s pretty clear, is just not what Uhry wants to be doing. “No,” he says. “It would put me to sleep.”

Jerome Kramer, the former editor-in-chief of Book Magazine and Kirkus Reviews, attended the same Atlanta high school, Druid Hills, as Alfred Uhry, albeit separated by several years. He now lives 10 blocks from Mr. Uhry on Manhattan’s Upper West Side, but maintains that this is not a deliberate stalking tactic.