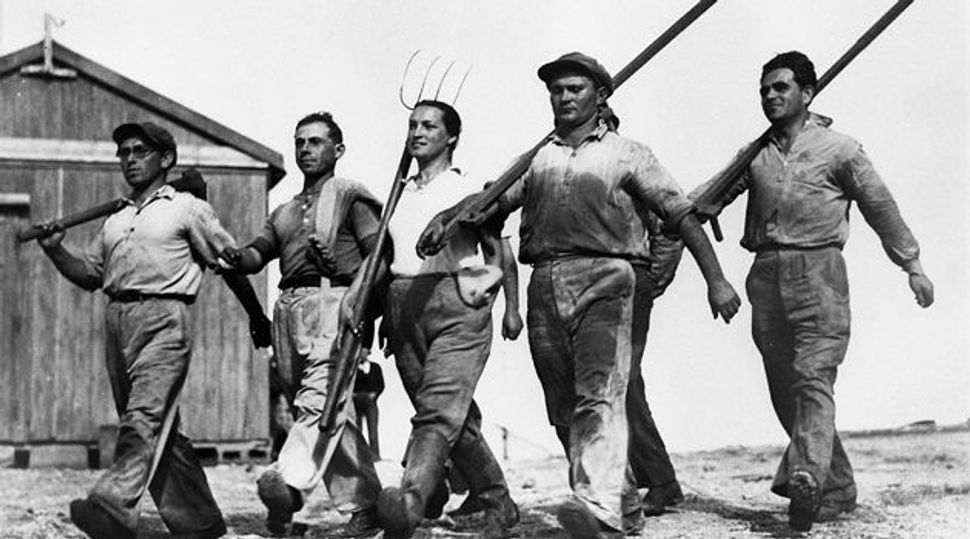 Forward!: Radicals of the 1930s and 40s mostly agreed that the U.N. should grant Jews a state alongside an Arab one. Things are very different today. Image by getty images

“From Ambivalence to Betrayal: The Left, the Jews, and Israel”
By Robert S. Wistrich
University of Nebraska Press, 648 pages, $55

Imagine this: It’s the summer of 1947 and you’re a Communist or a fellow traveler or a Socialist or another kind of anti-Stalinist. Despite myriad differences with political rivals, you share the same basic position on the question of Palestine. You insist that the United Nations grant Jews a state alongside an Arab one. When the United States balks at this proposal, you attend a rally or sign a petition or fume at the State Department. In November you celebrate the United Nations’ vote in favor of partition, and six months later you curse the Arab invasion of the newborn State of Israel.

And when Israel emerges victorious, you hail the political resurrection of the Jewish nation in the form of a vital socialist or proto-socialist democracy. You might criticize some of Israel’s policies, but you do so as a sympathizer — not as a Zionist necessarily, but as someone impressed by Zionism’s achievements. If you are one of the few who oppose Israel resolutely, then you probably belong to a fringe sect. Such was reality, more or less, at the time of Israel’s creation. 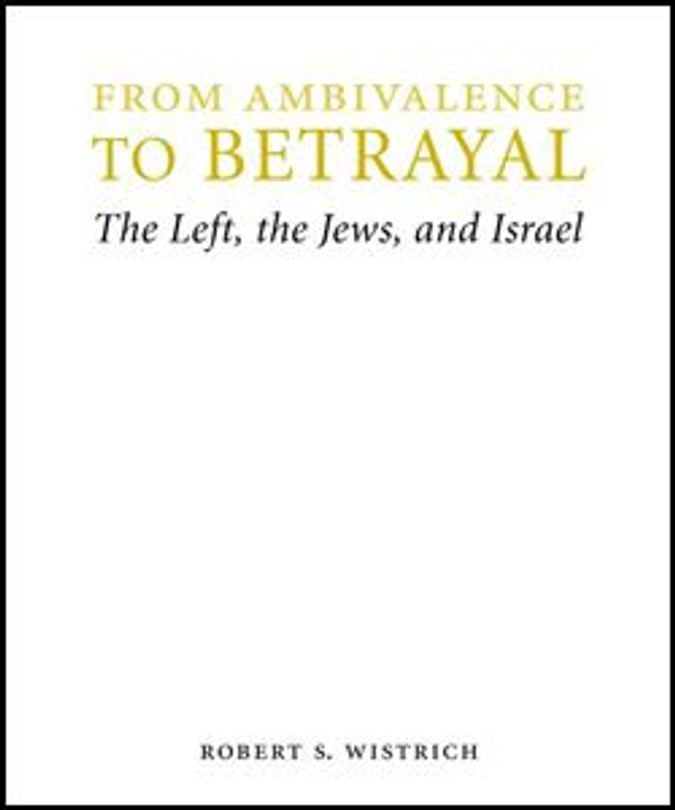 A different situation prevailed four decades beforehand. Prior to World War I, nearly all socialists in Europe and the United States viewed Zionism, to the extent they thought about it, as reactionary and futile. But then again, they paid little attention to it. Early 20th-century Zionism did not seem especially significant, certainly not a pernicious force in the international arena. A shift occurred in 1917, following the Balfour Declaration and the Bolshevik Revolution:

Soviet leaders and Communists everywhere began to denounce Zionism as a tool of British imperialism. But that was communism. Democratic Socialists began to muster sympathy toward Zionism during the 1920s, enough to welcome David Ben-Gurion’s party, Poale Zion, into the Socialist International. When it came to Zionism, the interwar left was divided, which should come as no surprise, because the left was, well, divided.

Today, in the early 21st century, the picture again looks substantially different. Most leftists — progressives, radicals, socialists, anarchists — loathe Israel. Some do not. A scattering of leftists (and most liberals) still sympathizes with the Jewish state, but they feel beleaguered, defensive, even intimidated. To stand squarely and comfortably on the left today is to believe that Israel is a racist, imperialist country (“apartheid on steroids,” as a colleague put it to me). Such anti-Israelism is not altogether new; it surged within the New Left in the late-1960s and kept surging ever since, but, for many years, anti-Israelism was met with vigorous counterarguments from within the left. Noam Chomsky used to complain that pro-Israel bias pervaded the left, which was a gross exaggeration but had some basis in reality. That was then. Now, leftists accuse Chomsky of betrayal. They indict him for placing tribal loyalties above professed political principles. Why? Because Chomsky opposes boycotts of Israel and supports a two-state solution that would permit Israel’s continued existence. Noam Chomsky: Zionism’s fifth columnist.

The left’s relationship to Zionism and Israel defies simple generalization. It has, over the past century, evolved in various directions, just as Zionism, Israel and the left itself have changed. Few scholars are as qualified as The Hebrew University’s Robert Wistrich to write a comprehensive history of this vexed relationship. Wistrich has published extensively on European Socialists and their writings on Jews. Indeed, “From Ambivalence to Betrayal: The Left, the Jews, and Israel” draws from a number of Wistrich’s previous studies. Although not entirely new, Wistrich’s impressive tome assembles a career’s worth of important research. Anyone interested in the history of socialism and the Jews must read this book.

Contemporary left-wing anti-Zionism in Europe provides the point of departure. At its obsessive, paranoid, bigoted worst, today’s anti-Zionism contains only a tenuous connection to classical Marxism and its Enlightenment values. It has become “the place where ‘Islamo-fascism’ merges with ‘Islamo-Marxism’ in an empty ‘progressivism’ without progress, driven by a convulsive hatred of Western modernity, of Jews, of bourgeois liberalism.” Chants of “Death to Israel,” “End the Holocaust in Gaza” or “Hamas, Hamas, Jews to the Gas” reflect a profound ideological rupture. Why, Wistrich asks, has the left betrayed its own intellectual and political heritage? What went wrong?

Wistrich opens with those questions, yet drops them immediately. Rather than probe the discontinuities of left-wing anti-Zionism, Wistrich excavates its roots in European socialism. Continuity becomes his main theme. Over a series of case studies spanning 509 pages (not until the final 100 pages does he turn to the recent past), Wistrich examines the attitudes and ideas of socialist thinkers and leaders regarding Jews, anti-Semitism and Zionism. He presents disturbing evidence. Karl Marx, in his youth, equated Jews with economic exploitation.

Russian anarchist Mikhail Bakunin detested that “unique devouring parasite,” that “bloodsucking people,” the Jews. Victor Adler, a founder of Austrian Social Democracy, denounced “anti-Semitic incitement” but also felt compelled to condemn “philo-Semitic incitement” in a show of misguided evenhandedness. Adler and many of his comrades argued that anti-Semitism would inevitably disappear in the future socialist society “in which the qualities referred to, rightly or wrongly, as Jewish would not ensure influence and power or a life of indulgence.” Into such a society the Jews would completely assimilate, or, in Adler’s words, the “wandering Jew” would wander “into his grave.” And there was the problem of what might be called theoretical discrimination. Austrian Marxists developed an innovative theory recognizing the national rights of small nationalities living within the Austro-Hungarian Empire, but denied those rights to Jews. Croats qualified as a genuine nation; the Jews amounted to a moribund caste.

Wistrich establishes a blemished record. Ambivalence, callousness, even prejudice existed within socialist movements dating back to the mid-19th century. Yet how should we evaluate the Socialist record overall? Wistrich fails to say directly. His selection of case studies implies that Socialists generally suffered from a special Jewish problem. Austrian Chancellor Bruno Kreisky receives a scathing portrait for his smelly innuendos about Polish Jews and his embrace of the Palestine Liberation Organization during the 1970s. Fine. Yet Wistrich does not see fit to grant French Socialist leader Leon Blum and Socialist International chairman Emile Vandervelde equal attention for their roles in supporting Zionism during the 1920s and ’30s. A 600-page, “pathbreaking synthesis” ought to cast a reasonably wide net.

“From Ambivalence to Betrayal” misleads in another way: It fails to situate Socialists within the larger political contexts in which they operated. To what extent were Socialist parties better or worse than other parties? Wistrich mentions, here and there, the existence of right-wing parties that agitated against Jews, but he does not adequately underscore their differences from Socialists. A newcomer to the subject could easily conclude from Wistrich’s study that Socialist parties were anti-Semitic parties. In fact, the great social democratic movements of Austria and Germany, for all their flaws, neither agitated against Jews nor proposed restrictions on them. They stood for full civil and political equality. No wonder, then, that Central European Jews, almost entirely, voted for social democratic and liberal parties.

Wistrich profiles several seeming exceptions. French Jewish intellectual Bernard Lazare abandoned “self-hatred” and developed an anarchist brand of Zionism in response to the Dreyfus Affair. German evolutionary Socialist Edward Bernstein never minimized the seriousness of anti-Semitism and even cooperated with Zionists. The theoretical journal with which Bernstein associated, Sozialistische Monatshefte, published numerous pro-Zionist articles. Even the quintessential revolutionary internationalist Leon Trotsky moderated his opposition to Zionism in the 1930s and predicted with remarkable prescience the destruction of European Jewry. In an appeal to American Jews, written in December 1938, Trotsky warned: “It is possible to imagine without difficulty what awaits the Jews at the mere outbreak of the future world war. But even without war, the next development of world reaction signifies with certainty the physical extermination of the Jews.”

Wistrich treats Trotsky, Bernstein and Lazare as exceptions. Yet numerous other exceptions, mentioned usually in passing, accumulate over hundreds of pages, and the accumulation suggests a different possible account. The broad outlines of this alternative version might look something like this:

In the 19th century, European radicals often employed anti-Jewish vocabulary and concepts; however, as Marxian social democrats developed a sophisticated analysis of capitalism and as they confronted right-wing movements in the final third of the century, they began to take the problem of anti-Semitism seriously, albeit within faulty parameters that hampered understanding of Jews and their predicaments. At the same time, Yiddish-speaking Jews in Eastern Europe and North America built popular socialist movements that advanced various forms of Jewish nationalism, Zionism among them.

The rise of autonomous Jewish parties initially sparked conflicts with general socialist parties such as the Russian Social-Democratic Workers’ Party, whose leaders failed to grasp the rationale for organizations such as the Bund. Nonetheless, in certain important instances — for example, the Bund’s relationship with the Mensheviks — tensions eventually eased and led to cooperation. The Bolsheviks never stopped condemning Jewish parties as nationalistic, but they nonetheless granted nationality rights to Jews after 1917. The Soviet government also outlawed anti-Semitism, and the Red Army quashed the mass slaughter of Jews by counter-revolutionary forces during the Civil War. In 1948, the USSR and Soviet bloc countries lent crucial diplomatic and military aid to Israel, which they soon replaced with crude anti-Semitic campaigns. Yet despite drastic shifts in Soviet policies, some Communists in the West retained sympathies for Israel and decried anti-Zionism. (A powerful statement by Austrian Communist Bruno Frei appears in Wistrich’s 1979 anthology, “The Left Against Zion.”) Meanwhile, postwar European social democrats gave consistently strong support to social democratic Israel. In the proposed narrative sketched here, blemishes would remain, but not for the purpose of an overall indictment.

The post-1967 hostility toward Israel still requires explanation. What went wrong, as Wistrich asks at the book’s outset? The rise of Arab nationalism and, later, Islamic fundamentalism, the rightward drift in Israeli politics and the ongoing occupation of the West Bank all have to be taken into account. Exceptions and counter-trends also require recognition. For even today, intellectuals, journals and organizations of the left continue to warn against anti-Semitism, oppose boycotts and insist on Israel’s right to exist. Within the anti-Israel movement itself, fissures and rifts have surfaced, as witnessed by Chomsky.

A less selective, more complex and judicious history of the left, Jews and Israel remains to be written. In the meantime, “From Ambivalence to Betrayal” gives readers much to consider.

Tony Michels is the George L. Mosse Associate Professor of American Jewish History at the University of Wisconsin, Madison. He is author of “A Fire in Their Hearts: Yiddish Socialists in New York (Harvard University Press, 2005) and editor of the recent “Jewish Radicals: A Documentary History” (NYU Press).