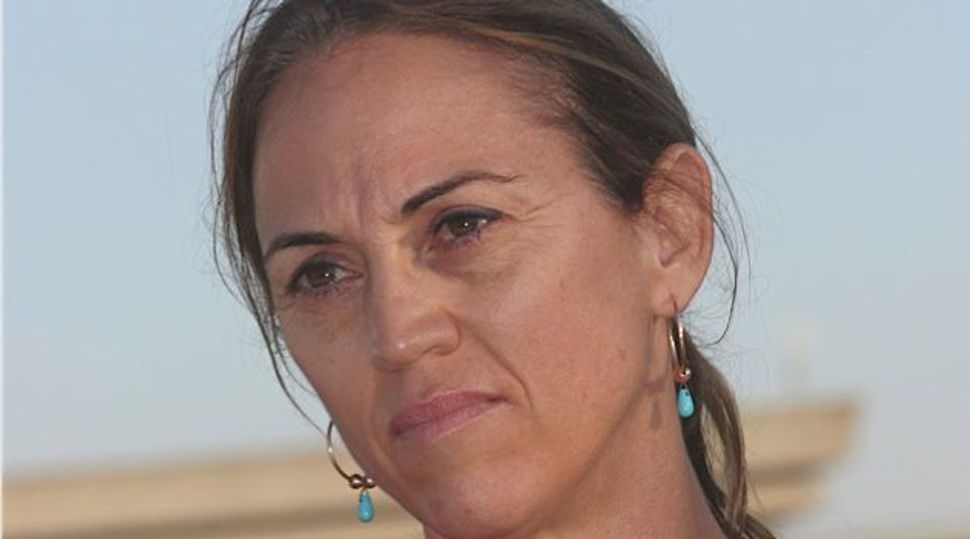 ● A Bride For One Night: Talmud Tales
By Ruth Calderon, translated by Ilana Kurshan
The Jewish Publication Society, 184 pages, $21.95

If Ruth Calderon did not exist, it would be necessary to dream of someone like her.

For almost half a century, American expatriates and a small group of native Israelis have creatively and courageously re-engaged with traditional Jewish texts — Talmud, Midrash, piyutim, or liturgical poetry — that had long been the provenance of religious elites. Many of these, like Calderon herself, are not traditionally religious but have discovered that these texts, and the lives they illuminate, are rich in literary and philosophical meaning, whether or not one finds them religiously normative.

To those of us who have been part of this community in Israel — at the Pardes Institute; at Elul and Alma, two institutions Calderon founded; in “singing communities” around the country, or in a growing handful of other locations — the immersion within these textual and experiential worlds is often what we love most about Israel itself. And yet we know that these spaces remain at the margins of Israeli life, little countercultures with little impact on the mainstream.

It was a surprise when Calderon was elected to the Knesset in 2012. She was 13th on a list (Yesh Atid) that was expected to win half a dozen. Yet it won 19, and there she was, one of us.

It was an even bigger surprise when Calderon’s inaugural speech, in February 2013, included a lesson in Talmud (Ketubot 62b, if you wanted to follow along). Most freshman politicians would have given the pat, expected talk, full of vague and lofty rhetoric. But this was Calderon as Calderon, wasting no time confounding expectations of what a member of Knesset could be.

The surprise approached shock when Yitzhak Vaknin, a Knesset member for the Shas party, joined in (some would say “interrupted”) rather than objecting to a woman teaching Talmud on the floor of the Knesset.

And the shock melted into wonderment when Calderon’s speech went viral on YouTube (250,000 views and counting), and prompted many to anoint her as the much-dreamed-of bridge between religious and secular, right-wing and left-wing.

As with all such hopes — Barack Obama in 2008 comes to mind — these were destined to be unfulfilled. But Calderon has indeed distinguished herself as a bridge builder in all these ways and more. She has continued to advocate for Jewish culture, while opposing the Haredi draft exemption. She has spoken at the J Street Conference while at the same time scandalizing many left-wingers with hawkish comments about Palestinians and Operation Protective Edge.

And, to the consternation of civil society activists, she is insistent on both equality for women and the “thick” Jewishness of the Jewish state. In short, Calderon is a transformative figure, even if the transformation is still very much a work in progress.

Interestingly, her first book since this ascendancy is neither a cultural manifesto nor a political memoir; it’s a small collection of tales from the Talmud, clearly Calderon’s first (literary) love. Each excerpt is followed by an expansive retelling by Calderon, filling in the gaps in midrashic style, as well as favoring points of view different from those of the primary narrative. Also following is a reflection on the story from Calderon’s perspective.

For those unfamiliar with this mode of relating to Talmud — and that is, of course, 99% of the world — this slim anthology is an excellent introduction to the literary excavation of classic texts. Not in the scholarly sense; “A Bride for One Night” does not spend much time with the layers of authorship and editing that academics have discovered within the Talmud. Rather, Calderon’s is a literary-personal-philosophical-political project, reclaiming texts that had been kept semi-secret and finding within those texts personalities, voices and themes that are fully three-dimensional, and often heterodox.

The first time one makes this discovery, the thrill can be exhilarating. Many of us encounter Judaism as a set of inexplicable rules: do’s and don’ts, sits and stands. When I was immersed in Talmud study, this superficial Judaism seemed, indeed, like the thin, often dead skin atop a thriving organism. Calderon here focuses on Aggadic material — the narratives of the talmudic rabbis — rather than on the legal, halachic material. But for me, both were revelations, the polar opposite of the bland certitudes with which I had grown up.

Calderon’s exegeses, often of talmudic tales that seem opaque and mystifying at first, open the door to this hidden world. They reveal talmudic voices deeply troubled by talmudic values, critical of authority, aware of the subjugation of women and often at odds with what we suppose to be the dominant thrust of the Talmud itself.

Among Calderon’s central projects is to give voice to women whose voices were excluded from the Talmud. Retelling the horrifying story in Midrash Tanhuma of “drinking the bitter waters” — a kind of witch trial in which a suspected adulteress drank poison to “prove” whether or not she had been faithful — is powerful in a number of ways. First, and most simply, it makes this injustice known. Second, by telling the story from one of the female characters’ point of view, it humanizes the narrative and its participants.

And third, as with Anita Diamant’s “The Red Tent,” the shift in perspective enables us to imagine what patriarchal Israel might have been like for those excluded from power — women. Suddenly, the imagined consensus of the male authorities begins to resemble coercion. The result can be enlightening.

I have taken the perspective of a newcomer to the talmudic world for a reason: For those of us who have spent more time in this world, Calderon’s interpretations are not equally illuminating. I hasten to add that this is not exactly a criticism. I hope that Calderon’s book finds its core audience, which should be those open to a Jewish literary adventure but not yet familiar with this terrain.

So it is not really a complaint to say that much of Calderon’s book feels familiar to me. After all, she is “one of us” and has been mapping the same territory many others have explored. Yet many of her inventions feel a little flat. Yes, the dominant voices of the Talmud marginalize women, and yes, it is interesting and important to correct that. But Calderon’s feminism here is not particularly new or innovative.

Retelling the greatest homoerotic tale in the Talmud, the story of Rabbi Yochanan and Resh Lakish (Bava Metzia 84a), with only the slightest nod toward the homoeroticism is also extremely disappointing. (On a related theme, saying that “those who suffer from AIDS” are “gravely ill, and the ways of contracting infection are not fully known” is downright irresponsible. Most HIV-positive people in Israel are not gravely ill, and we know exactly how infection is contracted.)

I also found Calderon’s “reflections” on the tales more inspiring than her retellings of them. I’ve never been a fan of historical novelization — even Milton Steinberg’s “As a Driven Leaf” feels a little stilted to me. Here, the inner lives of Calderon’s first-person narratives make her characters seem like 21st-century women plopped into a third-century reality.

In contrast, her reflective writing — particularly on the title episode — is astute, often brilliant, and the suggestive sparseness of the talmudic texts themselves seem pregnant with meaning. At times, reading the book, I wanted to applaud translator Ilana Kurshan as much as I did Calderon. These are exceptional renderings of difficult texts that manage to simplify without simplification. They, and Calderon’s prose, are so clearly presented as to be inspiring on their own.

“A Bride for One Night” is a book that lovers of Talmud must buy — in order to give to their friends. It does not condescend to the reader, does not paper over the difficult aspects of this ancient society and does not pull punches. What it does do is invite one into two worlds: that of the Talmudic sages and, perhaps more important, that of Calderon’s own beit midrash, or study hall, where small miracles are happening every day.

It’s hard to think of another politician, Israeli or otherwise, capable of such transformation.