How ‘Golem’ Appropriated a Jewish Myth for the Smartphone Era 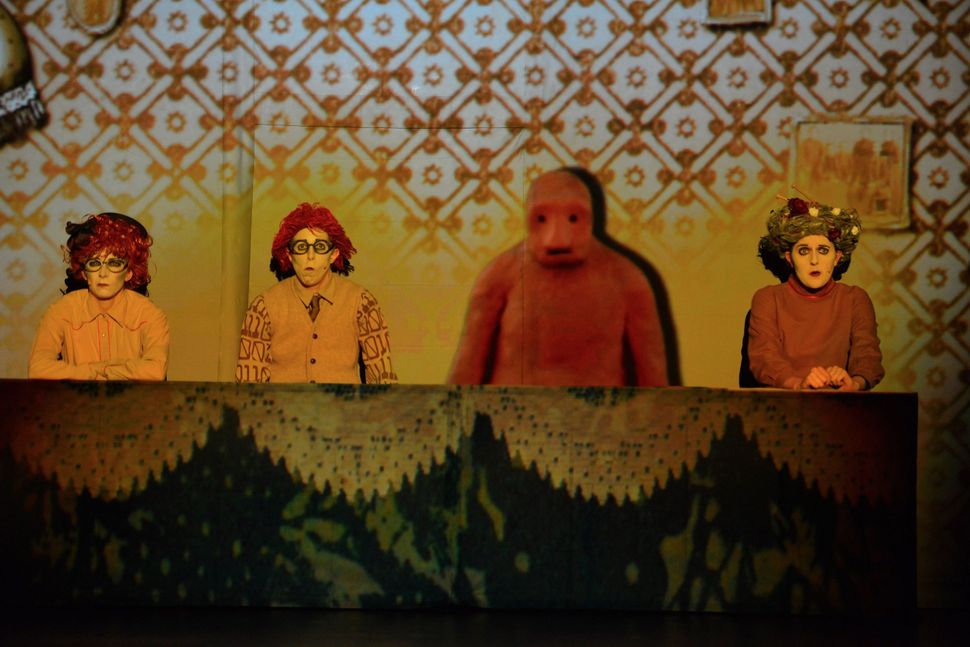 I was excited for the London theater company 1927’s new play “Golem,” written and directed by Suzanne Andrade, which plays at the Lincoln Center Festival through July 31st. Really, I was. From Pete Hamill’s “Snow in August” to Michael Chabon’s “The Amazing Adventures of Kavalier and Clay,” every representation of the golem – in Jewish mysticism, an animated automaton made of clay and given power through the name of G-d – I’d ever previously encountered had been intriguing and intoxicating.

A disappointment, then, that this “Golem” has so little interest in or respect for the origins of its title figure. The mass-manufactured golems with which it’s populated have little to do with mysticism or Judaism, serving instead as poorly-veiled allegories for the smartphone. Operating according to the wishes of a cloud-like presence, the personified consciousness of something like “big industry,” they transform from mute, anthropomorphized lumps of useful clay to vocal, devious devices that rapidly brainwash and homogenize the population. They become ever smaller, more insidious in their techniques, and more fashionable; in their minute final iteration, they are manufactured to be surgically implanted in one of their owner’s ears.

“Golem” hinges on Robert, a drab young man who becomes the first owner of a golem, and his sister Annie, who watches his increasing dependence on it with increasing dismay. The play offers a dystopian vision of the future, one in which technological progress leeches independent thought and feeling from humanity. It’s a story that’s been repeated through the decades, from Aldous Huxley’s “Brave New World” to Spike Jonze’s “Her.” There’s value to its moral: it’s useful to be reminded that humans, notorious for embracing the implements of our own eventual destruction, can always do it again. In a tradition already so rich with takes as nuanced and insightful as Huxley’s and Jonze’s, however, “Golem,” which plays for style rather than substance, is too one-note to make a real impact.

It also, significantly, achieves its message by using an important Jewish cultural touchstone as a whitewashed prop. It’s true, in Jewish folklore, that containing a golem’s strength and directing it for good has proved a key difficulty. (The most famous story of the golem, that of the golem of Prague, has multiple endings; all involve the golem’s creator, Rabbi Judah Loew ben Bezalel, immobilizing his creation when it threatens harm.) Insofar as “Golem” communicates the tenuous ethical area in which such a figure dwells, it displays some understanding of its inspiration. By ignoring the rest of the golem’s distinctly Jewish cultural significance – including, crucially, the fact that the creation and activation of one is seen to be an execution of tremendous spiritual learning and effort, not an easily achievable and scalable commercial endeavor – “Golem” turns a figure of immense power and mystery into a cheap narrative trick.

It’s not a malicious choice, but it’s careless and appropriative, and it has unsavory connotations. Take, for instance, the basic premise: a Jewish product overruns the world as part of a grand consumerist conspiracy. That’s a familiar trope, for the wrong reasons: it’s a favorite of anti-Semites worldwide. Similarly, since a golem is traditionally activated by having the written name of God either inserted in its mouth or inscribed on its forehead, it’s a logical extension that the golem derives its power from God. In “Golem,” the title creatures operate according to the commands of an evil capitalist persona, opening up the possibility for an unfortunate implicit parallel to be drawn between the voice of industry and the Jewish God.

The production’s mediating grace is its rich visual production; 1927 bills “Golem” as similar to “a giant graphic novel burst into life,” and it richly fulfills that promise. Taking place on a stage adorned only with a set of drums, a keyboard, and large white wall, the sparse set serves as a screen for vivid animations that provide a constant accompaniment to the performance. The use of animation to create the play’s environment and ambience is clever; it’s much easier to imagine the fast-paced alteration of society from grim but lively to Technicolor and soulless in an easily mutable animated world. Installing 3-dimensional, real-world characters in that setting, and witnessing the narrator Annie’s, confusion at it, elicits an empathetic revulsion, a point of emotional contact that is the production’s most persuasive element.

Had 1927 chosen a different figure to provide their allegory for the perils of modern technology, and had they invested as much time and care in their script as in the production’s visual construction, “Golem” might have turned out to be not only provocative, but also engaging and deep. As it is, it’s a sociopolitical critique that doesn’t bother to think through its own sociopolitical implications. If I find myself in need of a reminder of the dark power of my iPhone, I think I’ll stick to “Brave New World.”

How ‘Golem’ Appropriated a Jewish Myth for the Smartphone Era