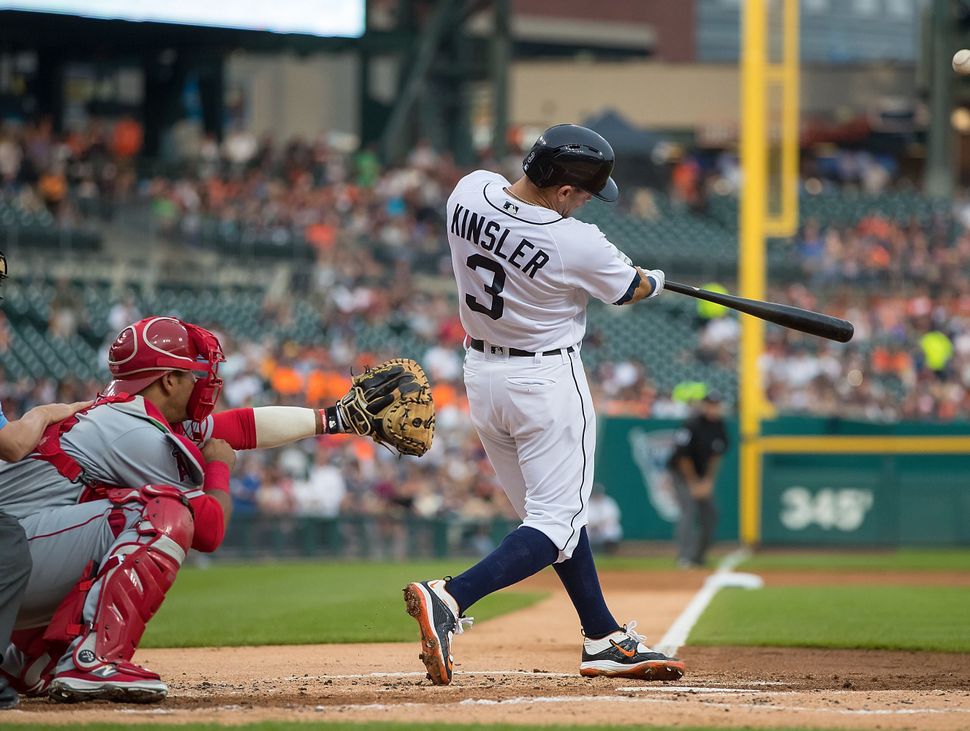 In a sport where players generally peak in their late-twenties and decline precipitously thereafter, Ian Kinsler’s early-thirties revival has been an unexpected joy to watch.

A three-time All Star second baseman (and two-time 30-30 player) during eight seasons with the Texas Rangers, Kinsler has somehow kicked things into even higher gear since being traded to the Detroit Tigers for Prince Fielder in November 2013. One of the Tigers’ most important and productive players over the past three seasons, Kinsler has contributed mightily at the plate and in the field while missing only a total of 18 games. In 2016, he won his first Gold Glove award, while also hitting .288 with a .348 OBP as the Tigers’ leadoff man, scoring 117 runs and driving in another 83, while setting career highs in home runs (28) and total bases (299). Not bad for a guy who will turn 35 this June.

This, however, wouldn’t be the first time that Ian Kinsler has defied expectations. Ignored by Division I recruiters despite being named first-team All State during his senior year at Canyon Del Oro High School in Oro Valley, Arizona, Kinsler attended Central Arizona College, where he hit .405 as a freshman. He transferred to Arizona State University for his sophomore year; but when ASU didn’t give him enough playing time, he transferred again to the University of Missouri, where he was named to the All-Big 12 second team in 2003 after hitting .335 with a .952 OPS.

Even so, he wasn’t selected until the 17th round of that year’s MLB June amateur draft, when the Rangers picked him up. Fourteen years on, Kinsler has not only proven to be the best player to emerge from that entire June 2003 draft, but he’s now also considered among of the greatest 17th-round picks in the half-century since the amateur draft was first established.

The son of a Jewish father and a Catholic mother, Kinsler has also established himself one of the greatest players of Jewish heritage in MLB history. You’d have to go as far back as Lipman Pike in the 1870s to find a Jewish second baseman who has made as much of a contribution to the game — and even Pike was more of an outfielder than a middle infielder. Though qualified to play for Team Israel in this year’s World Baseball Classic, Kinsler opted to accept an invitation from Team USA manager Jim Leyland, and wound up making a major contribution to the team’s championship run, capping it with a two-run homer against Puerto Rico in the final game of the tournament.

Your father is Jewish and your mother Catholic. Was Judaism a big part of your home life when you were growing up?

We really didn’t go to church or temple at all; we really had no religious line in our house, I guess you could say. We rarely talked about it. Our parents just kind of let us figure it out on our own, through friends, and through family — when we’d go back east and visit my dad’s side of the family, that’s where I’d learn a little more about the Jewish culture and the religion than I did living in Tucson. You go to the East Coast, and obviously it’s a lot more open and a lot more talked about; it’s really a culture there, so you start learning about it.

You’re the best Jewish player that the Tigers have had since Hank Greenberg — and at this point, you’re probably the best Jewish second baseman in major league history. What does that mean to you?

Man, that’s a tough question. Because you look at guys like Hank Greenberg, guys who dealt with a ton of adversity in their career because of the religion they were, and it’s tough to compare myself to people like that. It’s tough to look at the history of Jewish ballplayers, because there’s really nothing adverse that I’ve had to deal — you hear things, and there’s talk and stuff, but you don’t really have to deal with anything like the older players did. Obviously, it’s a great honor; just to be part of that is something really special.

Did you become more aware of Hank Greenberg’s story and legacy once you joined the Tigers?

I knew a little bit about him before I became a Tiger, but I learned a lot more about him once I got to Detroit. My number was 5 when I was in Texas, and obviously that number was retired when I got to Detroit. My dad thought that I should ask the Greenberg family if I could wear the number, and I looked at him like he had six eyes. [Laughs] I thought that was a terrible idea, and never something I would ask to do!

So you took number 3, instead.

Yeah. But coming to Detroit, I learned a little bit more about what he did on the field; that was extremely special in itself, but then you learn more about what he did off the field, and what he represented, and who he was as a person, and what he accomplished. The Tigers are a great organization to be part of, just because of the history, and Hank Greenberg was a huge part of that history. I would love to be a part of a championship team and add to that history. So we’ll see how this year goes, and beyond!

Your three seasons with the Tigers have been among the best of your career, and last season was the best of those three. What do you attribute that to? A change of scenery from Texas? Changes in your preparation? Playing for Brad Ausmus?

I think all of those kind of contributed to it. At the time, moving to the Tigers from the Rangers, I thought that I had a lot more to give than what I was giving on the field; I felt I could do a lot more, so I had to evaluate myself and figure out what adjustments I needed to make, and really concentrate on getting better and getting rid of some bad habits that I’d created. I was trying to get a little more sound, technically, and a change of scenery really gives you energy. In Texas, I lost a lot of weight in the summers because it’s so hot there; coming to Detroit, I knew I wasn’t going to be dealing with that, and I knew I was going to be running a lot. In Texas, you hit a ball in the gap, and you pretty much coast into second; there’s not too many opportunities to hit a triple.

Unlike at Comerica, where the outfield is huge.

Yeah — in Detroit, I have the opportunity to run a lot more, especially when I’m on first and those guys behind me hit the ball into the gap. So that was a little bit of a change; I knew I needed to get my speed back and be that presence at the top of the order. So I think it all just came together at the right time.

You have a reputation of being a very savvy ballplayer — someone who constantly observes and evaluates each situation over the course of the game. How did you become that kind of player?

I was just taught that at a young age. Growing up, I was always smaller than everybody I played with; my skills were just as good as everybody else’s, but I needed something extra to be head and shoulders above everybody else. My dad taught me the game really well at a young age; he taught me to always be ready for the unexpected, and be ready to take advantage of whatever you can. And in high school, I had a really good coach named Ken Winslow, who was the same way. And then I went to junior college, and I had a coach by the name of Clint Myers, who was the same way. Those guys were all about concentrating on the little things, and taking advantage of anything that the other teams give you. So that’s something that was ingrained in me at a young age, and it’s something that I continue to work on, something that’s always there.

Were there any major leaguers that you modeled your game after? Did you have specific baseball heroes when you were growing up?

I really didn’t. You know, I grew up in Tucson, and we never had a [MLB] team; the closest one we got was in Phoenix, when the Diamondbacks came in ’98. But we always had a rivalry with Phoenix — growing up, you didn’t like those kids, and you always competed against those kids in sports, so the Diamondbacks weren’t really a favorite team. [Laughs] It was baseball to watch, but when I was a kid, I mostly watched TBS and WGN — the Braves and the Cubs. The Cubs weren’t anything special until when they had Kerry Wood and Mark Prior, and that was when I went off to college. Mostly, I followed the Braves, because when I was a kid, the Braves were winning all those championships in a row. There wasn’t really anybody that I could model myself after on those teams, though. The middle of the infield, they were just really solid players; they weren’t superstar types, and they didn’t get that much hype because the Braves had Chipper Jones and Andruw Jones, and Javy Lopez and David Justice and Fred McGriff — they all overshadowed the guys in the middle. I would say that Andruw Jones was a guy that I really liked watching play, but I didn’t really model my game after anybody. I just enjoyed watching the game.

The original version of this article appeared on Jewishbaseballmuseum.com