In Praise of Giving Offense: A Review Of Eli Valley’s Diaspora Boy 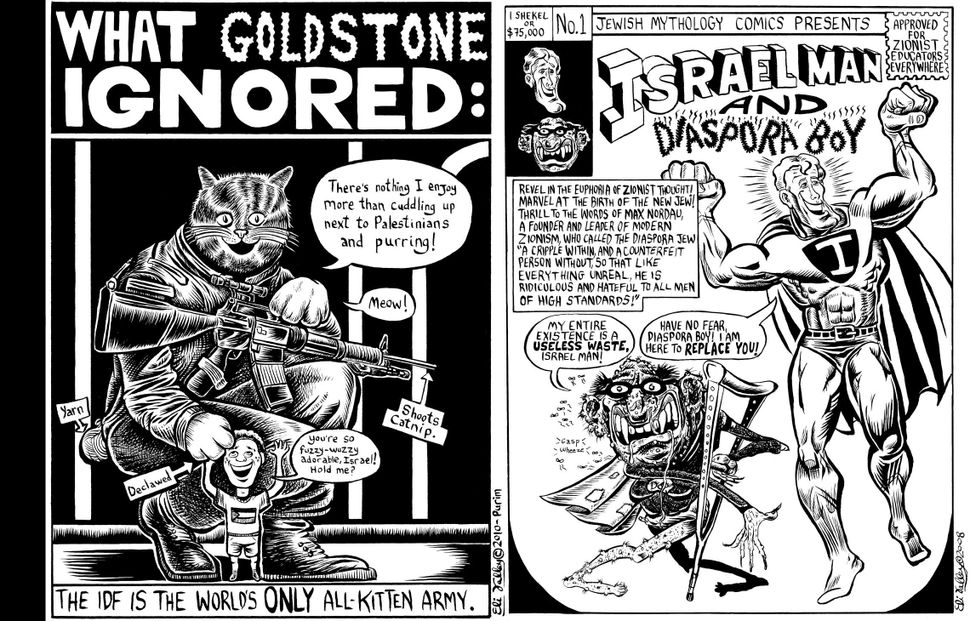 There’s a concept in the early Zionist writings that still haunts contemporary Jewish life. It’s the belief that the Diaspora Jew is an outmoded kind of Jew. Weak and effeminate from too much studying, he is submissive and abject, always apologizing to the gentiles who hate him. As opposed to this Diaspora Jew, the early Zionists envisioned a Zionist Jew or a new Jew; he would be strong, physically and mentally, and unapologetic for his power.

These days, this idea is transmitted less through explicit writings and more through symbols and aura. It’s rampant in the selfies that adoring American visitors take with soldiers from the Israel Defense Forces, and in the stuttering mannerisms assumed by every lead in a Woody Allen movie. But there was a time when Jews were less coy. Max Nordau, a founding father of Zionism, called the Diaspora Jew “a cripple within, and a counterfeit person without, so that like everything unreal, he is ridiculous and hateful to all men of high standards.”

If you think this sounds more like anti-Semitic canard than like Zionist thought, you’re right. And it’s exactly this kind of intellectual hypocrisy that Eli Valley skewers in his new book, “Diaspora Boy: Comics on Crisis in America and Israel,” a collection of previously published comics (many of which appeared originally in the Forward, where Valley was once an artist in residence).

The comic strip after which the book is named first appeared in Jewcy in 2008, and it exhibits Valley’s signature style — densely crowded frames with black-and-white characters that juxtapose the ghoulish with the highbrow. In Valley’s rendering, the new Jew is called Israel Man, a superhero who is “able to see 10,000 years into the future,” and whose semen is “used to make the desert bloom.” In the shadow of this magnificent new Jew is Diaspora Boy, a crippled, sniveling, drooling cretin who has to stand on large tomes (“How To Love Your Anti-Semitic Gentile Wife,” “The Hypochondriac’s Cookbook,” “How To Live Without a National Culture”) just to be as tall as Israel Man. Unlike his idealized counterpart, Diaspora Boy “cannot defecate without 5,000 mg magnesium hydroxide, 4 gallons of prune juice, and a heating pad.” He also “hasn’t had an erection since the destruction of the Second Temple.”

What Valley is doing here is taking the anti-Semitic hypocrisies within Jewish thought and literalizing them. If Nordau called the Diaspora Jew “a cripple within,” Valley makes him crippled without.

He then takes the Zionist quotes, which would no doubt offend even the staunchest Zionists today, and associates them with other cultural touchstones that most of us subscribe to absolutely uncritically.

For example, the comics connect Jewish opposition to intermarriage to bizarre anti-Semitic tropes surrounding racial purity. Elsewhere he points out the distinction between the heroes of the Warsaw ghetto uprising and the victims of the concentration camps. With his grotesque, sometimes puerile drawings, Valley connects these quotidian Jewish obsessions with the early Zionist writings, exposing how implicated we all are in what is essentially racism. He forces us to make a choice: Either laugh at ourselves and repent, or call Valley a self-hating Jew and escape.

Throughout his career, Valley — who, full disclosure, I have known in personal and professional settings — has been subjected to the latter. Abraham Foxman, the former leader of the Anti-Defamation League and a recurring character in the comics, has called him a bigot. John Podhoretz, editor of Commentary Magazine, called him a kapo. He is frequently called a self-hating Jew and an anti-Semite in comments sections and on Twitter.

But to me, these ad hominem attacks are misguided. It is a Jewish audience that these comics seek to — well, offend. Indeed, it seems clear from reading “Diaspora Boy” that Valley loves Jews so much that he’s willing to suffer through this kind of abuse to keep calling us out.

In this sense, Valley is like that slave who walked behind the conquering Caesar, whose sole job was to whisper, “Remember, Caesar, thou art mortal.” Like Caesar, we too need that slave to slay our myths.

If I had to put my finger on Valley’s most salient target, it would be the way that a fetishization of racial purity has invaded Jewish institutions. If you’ve ever worried about the disappearance of the State of Israel due to a demographic threat, or if you’ve ever worried about the number of Jews intermarrying and ceasing to identify as Jewish, you are the object of this book’s scorn and it will be painful for you to read, as it was for me.

But it also filled me with hope — a hope that there was another way to think of Jews that wasn’t quite so racial (or racist, depending on whom you ask). Even if, like me, you believe the Israeli army strives to be extremely moral, you will feel utterly, brilliantly mocked by the comic “What Goldstone Ignored,” in which the IDF is pictured as the “World’s Only All Kitten Army.”

So powerful is Valley’s world view that I believe if Valley’s detractors were seated in a quiet room with Valley himself discussing the issues he addresses in his work — hypocrisy, Jewish genetics, Israeli aggression, how the Jewish leadership abandons anyone who disagrees with them — they might even come to agree with at least some of his criticisms.

It’s the aggressiveness of the comics, their very implacable power, that raises the hackles so. It’s that they present no room for debate; you are in such (literally!) ugly company if you try to defend anyone, including yourself. There is certainly a kind of illiberalism in this. The comics are terribly unbalanced. And they are terribly offensive. As a woman and a Jew, I am frequently offended.

But this book helped me realize how important it is to be offended. I used to wish Valley would write well-reasoned arguments. But now I don’t. Do the Jews need another leftist to write op-eds in Haaretz about our failings? Probably not. But do the Jews need someone penning comics that whisper in our stubborn ears, “You’re mortal?”

Hell yeah. I bet Caesar would have called the slave a self-hating Roman, too.

In Praise of Giving Offense: A Review Of Eli Valley’s Diaspora Boy