Are Millennials Tomorrow’s Revolutionaries — Or Its Fascists? 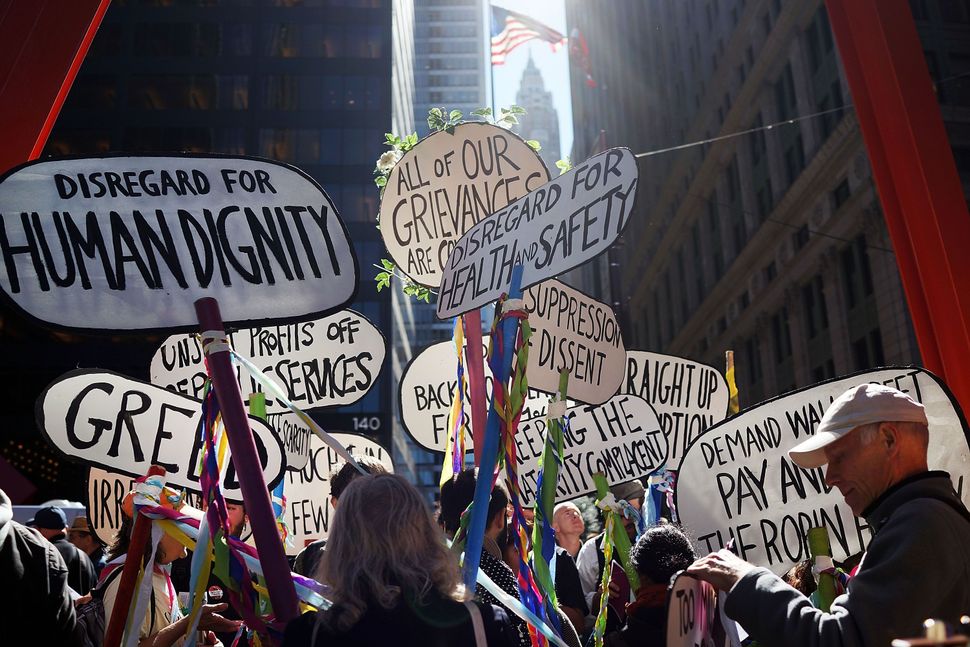 Kids These Days: Human Capital and the Making of Millennials
By Malcolm Harris
Little Brown and Company, 272 pages $16.50

Are millennials more worthy of pity or contempt?

Based on popular discourse, you might come to see this as the central controversy about that benighted generation. Their consumption habits and psychological hang-ups have been examined so repetitively that it’s no longer necessary to shuffle through the various stereotypes associated with them.

Yet millennials are also acknowledged to be in an unenviable and quite possibly pitiful position. Tamara Draut’s 2008 study of the “Economic State of Young America,” released by the public policy organization Demos contained bad news following that year’s financial crisis: “Today’s 20-somethings are likely to be the first generation not to be better off than their parents.” Economic instability included, the country’s political culture has rarely seemed so unstable or so toxic. The children are our future, as the saying goes, and the future is bleak.

The mix of alarmism and superficiality that defines the typical thinkpiece about millennials has made the genre into a punch line of sorts. As such, it’s a peculiar topic for a serious young writer to stake his debut upon, something that Malcolm Harris wryly acknowledges in his new book “Kids These Days: Human Capital and the Making of Millennials.” An editor at The New Inquiry, a journal of social critique, Harris bypasses the popular image of his cohort as jolly layabouts or oblivious narcissists. Instead, he believes that his generation is likely to make up the first batch of either “true American fascists” or “successful American revolutionaries.”

“The stakes really are that high: In the coming decades, more Americans will be forced to adapt in larger, stranger ways to an increasingly hostile environment,” he argues in the book’s introduction. “But millennials are going to be here regardless, and we have a lot of responsibility for what comes next.”

Harris first came to prominence by reporting on the 2011 Occupy Wall Street protests, themselves the first major political statement to emerge from the millennial generation. “Instead of one policy, we had an enemy: the 1 percent, the people who were profiting off of popular immiseration,” he writes of the protests. “Based on the data, it’s a good set of enemies for millennials to pick, and it was mostly millennials participating.” Wholesale opposition to capitalism had been a niche phenomenon in the United States, particularly since the country’s giddy triumph in the Cold War. For a few weeks, the Occupy movement made it a round-the-clock fixture on cable news.

Recent polls conducted by Harvard University and YouGov found that millennials favor socialism to capitalism by a narrow margin, a result that would have been shocking a generation back. Youth support unambiguously fueled the 2016 presidential campaign of self-described democratic socialist Bernie Sanders, who won more primary voters under age 30 than Donald Trump and Hillary Clinton combined. His jeremiads against millionaires and billionaires would have been familiar to anyone who had followed the Occupy movement. And the sizeable millennial opposition to capitalism is beginning to have a mainstream impact: Following the Senate’s passage of the Tax Cuts and Jobs Act, which gifts tremendous cuts to the very richest Americans while leaving future generations to foot the bill, The New York Times’ Michelle Goldberg published an article titled “No Wonder Millennials Hate Capitalism.” “You don’t have to want to abolish capitalism to understand why the prospect is tempting to a generation that’s being robbed,” she concluded.

Harris, who identifies as a communist, does indeed want to abolish capitalism. “Kids These Days” works painstakingly to pin the ugly situation of his generation squarely on that economic system. Harris examines the institutions that shape the development of the young, moving through schools and universities into broader arenas such as the workplace and showing how each has been reshaped by an ascendant economic doctrine that prizes perpetually increasing efficiency. Harris bases his arguments on sociological and economic studies that show how the institutions on which he focuses operate. Though his approach in rooted in Marxist theory, Harris borrows his guiding idea from the broad establishment he seeks to critique, prominently citing University of Chicago economist Gary Becker’s concept of “human capital.” Harris defines human capital as “the present value of the person’s future earnings, or a person’s imagined price at sale, if you could buy and sell free laborers — minus upkeep.”

“In order to fully recognize the scope of these changes, we need to think about young people the way industry and government already do,” he writes, “As investments, productive machinery, and ‘human capital.’”

In Harris’s analysis, the young are forced into an ever-intensifying competition to develop and exhibit human capital. That process begins as early as elementary school. He argues that the work done by children is obscured behind what sociologist Jürgen Zinnecker calls “pedagogical masking,” which recasts labor as purely educational; instead of compensation, children receive symbolic honors that accustom them to working without asking for material returns.

Harris details the process by which colleges both public and private, as they continually raise tuition rates, profit handsomely from their role as arbiters of human capital. By the time millennials enter the workforce, he argues, they are often saddled with student debt and numb to the ceaselessly accelerating pace of competition. “Like cell phones that are meant to be turned off only for upgrades,” he adds, “Millennials are on 24/7.”

The backdrop for these arguments is the disconnect between workers’ productivity and their compensation. The two rose together steadily until the 1970s, whereupon compensation became stagnant as productivity continued to increase. According to Harris, the dissonance between productivity and compensation “is perhaps the single phenomenon that defines millennials thus far.” (He has referred to that gap as the “rate of exploitation.”)

While Harris effectively surveys these economic trends, his work is most effective when he describes how these broader economic circumstances shape millennials’ daily lives. In his view, for instance, the alarming rates at which millennials take SSRIs for depression and stimulants to combat ADHD — the New York Times has separately dubbed them “The Antidepressant Generation” and “Generation ADHD” — is a natural response to economic pressure.

The central achievement of “Kids These Days” is its detailing of how the many institutions that shape American lives have been transformed by the neoliberal pivot of both major American political parties towards the free market. Harris offers a potent rebuke to the idea that neoliberalism is an ideology of freedom and movement, showing instead how lives have become increasingly surveilled, managed and even endangered as corporations attempt to push drive for profit to the absolute limits. Harris notes the case of Moritz Erhardt, a 21-year-old intern at the London branch of Merrill Lynch, who died in 2013 after working until 6 am on three consecutive nights, literally having worked himself to death. In contrast to the autonomy we’re said to enjoy, Harris argues that people are pressured into accepting lowered expectations and working more in exchange for less.

Yet “Kids These Days” sets out to be a comprehensive overview of a generation rather than an indictment of contemporary capitalism. It’s in that effort that the limitations of Harris’s project are most apparent and most interesting. First among those is the issue that the phenomena Harris describes may not be wholly unique to millennials. Harris writes specifically about the young, but several major changes he identifies took place not only prior to the first millennials entering the workforce, but also before they were born. (After all, the exploitation of workers is a story as old as capitalism itself.) Members of previous generations remain quite hazy throughout “Kids These Days,” and as a result, the book’s historical arguments remain incomplete. The question of how millennials differ meaningfully from previous generations is never fully taken up, nor does Harris offer an explicit argument that they do.

Harris’ portrait of millennials itself remains frustratingly one-dimensional. “As much as policymakers wish they could erase all the differences between students except for how high their scores are, there’s (thankfully) far too much variation for this to be feasible,” he writes. But within Harris’s data-driven, institutionally focused method, much of this variation ¬— and its subversive potential — fails to register. Generations are formed by the world they inherit, but they end up bringing something of their own to the situation as well. Without acknowledging millennials’ agency and their ability to improvise, the book paints its subjects as little more than the victims of circumstance.

Part of this failure can be attributed to Harris’s attempts to square the circle between the empirical approach favored by mainstream reformists and the polemical, insurrectionary stylings of leftist theorists. It’s gratifying to imagine Harris smuggling his holistic anti-capitalism into the mainstream; his best arguments are strong enough to carry weight there. Still, this gambit prevents Harris from offering a full-throated argument for his own revolutionary politics. This elision removes something critical from the book’s depiction of its subjects. If millennials are indeed fated to become, as Harris writes, the potential “first generation of successful American revolutionaries,” there’s little indication of what sort of revolutionaries they might actually make. Ultimately, the millennials of “Kids These Days” come off less as the fascists or revolutionaries of tomorrow than as yet another iteration of today’s neoliberal drones.

Although Harris’s methodology doesn’t illuminate how millennials could transform their society, there may still be reason to believe they will. If the current economic trends Harris outlines progress along the lines he details, it seems likely that something, eventually, will have to give. Conventional wisdom says that the baby boomer generation went through a period of fiery radicalism before settling into a reactionary complacency. “Kids These Days” shows how the material circumstance they’ve passed along may compel their children to follow the opposite trajectory. In any case, the history of the millennial generation is still yet to be written.

Are Millennials Tomorrow’s Revolutionaries — Or Its Fascists?