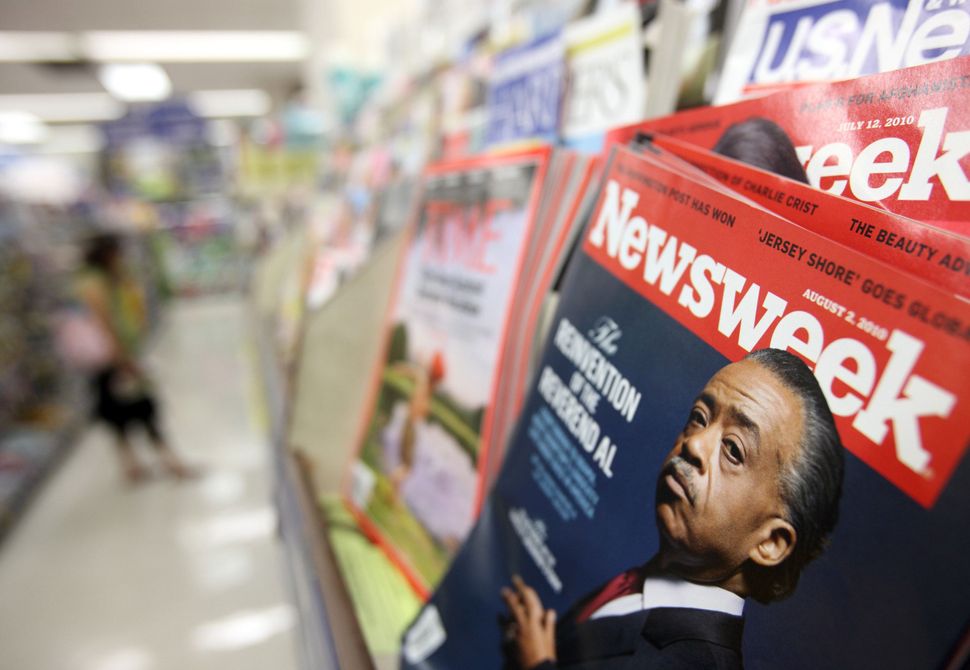 Newsweek’s editorial future was thrown into chaos on February 6, when the publication fired two top editors and two senior reporters. In the aftermath of the firings, several members of the editorial staff of Newsweek and the International Business Times, which shares Newsweek’s publisher, resigned in protest.

On January 18, Katz and Saul shared a byline on a story covering the Manhattan D.A.’s raid. The two reported that the raid was part of a “long-running probe” into Newsweek’s parent company, Newsweek Media Group, and that agents had confiscated 18 of the company’s computer servers.

In the wake of the firings, several prominent reporters and editors submitted their resignations, including David Sirota, Kurt Eichenwald, and Matthew Cooper. Despite the resignations, both publications continue to publish content as of February 14.

We’ve combed through Newsweek’s esteemed history of investigative reporting for some clues as to how the publication might resolve this mess.

On September 30, 1962, Peter Goldman and his colleague Karl Fleming drove towards Oxford, Mississippi to report on a civil rights milestone: Earlier that day, at Ole Miss, U.S. Marshals had escorted James Meredith onto campus to register him as the University’s first black student. According to Goldman, when the men arrived, they were told by campus security, “Gentlemen, you may proceed — at your own risk.” Inside, they witnessed 300 marshals attempting to quell the protests of thousands of students and segregationists on campus. To report their story, Goldman and Fleming survived acid attacks, tear gas, and, later that night, gunfire, before 14,000 U.S. soldiers arrived to return the campus to order. Ultimately, Goldman and Fleming’s seven-page story graced Newsweek’s cover in October of 1962. Its title, “The Sound and the Fury,” poignantly invoked Faulkner, an Oxford native.

If Newsweek can learn anything from Goldman and Fleming’s reporting, it is that journalists are not readily intimidated into dropping a story. Perhaps the publication can now hire less dogged staff, like, I don’t know, maybe two owls wearing a trench coat.

In 1972, Goldman heard about a break-in at the headquarters of the Democratic National Committee. He pitched the story to his boss at Newsweek’s D.C. bureau to little avail. By the time Newsweek devoted serious energy to reporting the story, Bob Woodward and Carl Bernstein had already begun to dominate the headlines with Watergate stories over at The Washington Post.

It took an enormous effort to claw Newsweek back into the forefront of investigative reporting on the Watergate scandal, but, by Goldman’s own account, once the investigation hit “institutional D.C.” in 1973, his magazine began to take the reins on the scandal’s narrative.

Goldman and the rest of Newsweek’s D.C. Bureau broke stories on the Senate testimonies and Supreme Court deliberations surrounding the break-in. They were even the first to report when Republican senators told Nixon it was time to resign. In a 2012 Daily Beast article, Goldman recalls that “the intensity, and the exhaustion, of those times was like nothing else I’d experienced at Newsweek, even during the floodtide years of the civil-rights movement.” All in all, Goldman wrote 38 cover stories in 14 months on the scandal.

Newsweek may not have been content eating Woodward and Bernstein’s dust in the 1970s, but today, with their outflux of staff, they might have to be content with second helpings on major stories. Then again, Newsweek executives do have an exclusive, inside scoop on their own alleged misconduct; if the allegations are true, they could always implicate themselves.

Michael Isikoff has been in the news frequently, as of late, having been cited in the infamous “Nunes memo.” The investigative reporter is most famous, though, for his exposé on the CIA’s incompetence and failures in the days and months before 9/11, “The Hijackers We Let Escape.”

His story for Newsweek revealed that the CIA was aware that known terrorists associated with Al Qaeda, who had been plotting strikes against the United States, were living in the United States, under their own names. The two terrorists in question, he wrote at the time, were “parading across America in plain sight,” and “could not have been easier to find.” In the piece, CIA officials attempt to shirk some responsibility, but offer a belated admission of guilt for failing to notify Immigration and Naturalization Service officials when these Al Qaeda operatives crossed the border into the U.S.

Newsweek: It’s clear your organization has a history of in-depth, necessary investigative reporting. As our own government parrots misinformation, and news outlets vie frantically for clicks, it’s more important than ever to return to the kind of dogged coverage of the (somewhat) recent past. Imagine the number of clicks Isikoff’s story would garner today, not to mention its impact in terms of public service. Reinstate your investigative staff, and see what wonders follow.