Who Are The Worst – And Best – Jewish Owners In Pro Sports? 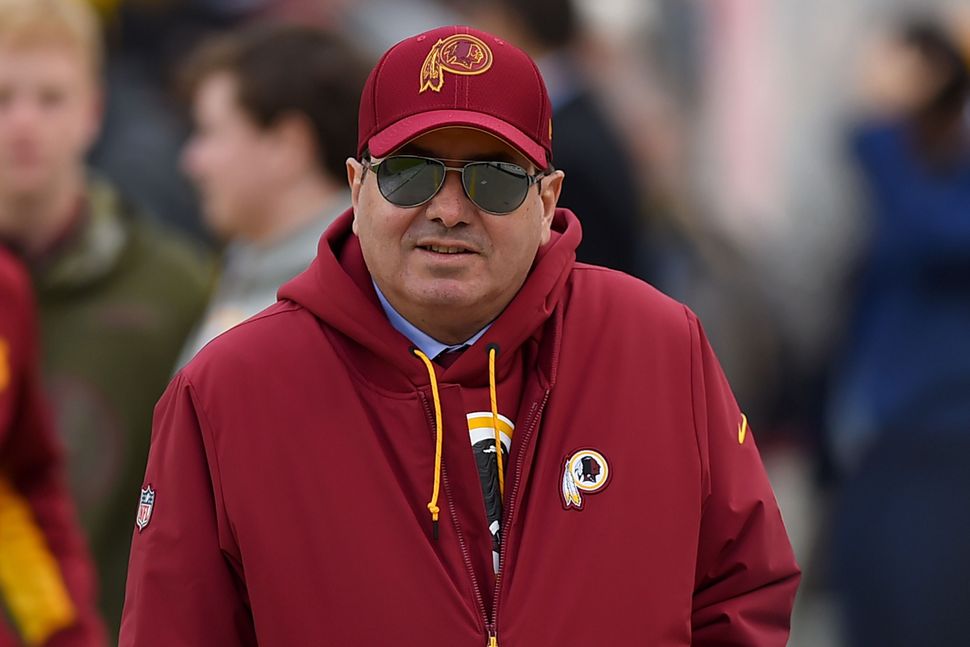 Reports that hedge fund billionaire Steve Cohen is in talks to buythe New York Mets from the Wilpon family are likely a relief to fans of the troubled National League team. But they’re also a reminder: Jews are vastly represented among the ranks of sports owners.

Out of 147 teams in the five major North American pro sports leagues, 46 are owned by people who identify as Jews or who have a Jewish parent. That’s more than 30% – including nearly half of all NBA owners.

And while 2019 may not have been a good year for the Jews, it was a great one for Jewish sports owners, who won the NFL, NBA, MLB and MLS championships and came within one game of winning the Stanley Cup to boot.

But which owners are the champion of champions? Which macher is a managing maven, a gaon of good hiring? And, conversely, which owners have run their teams into the ground though chutzpah and managerial mishegas?

To find out, the Forward calculated the average yearly winning percentage under current ownership for every NFL, NHL, NBA, MLB and MLS franchise that has been owned by a Jew for at least three seasons. We did this by combining regular season and playoff records into one annual percentage, up to the most recently completed season (ties counted as half a win).

This formula only recognizes on-field success, not owners’ business acumen in inflating their franchises’ net worth. And it probably over-inflates the rankings of good regular-season teams that choke in the playoffs – but as we’ll soon see, many fan bases would kill for a first-round flame-out.

Jewish owners performed a bit better than average overall, posting a winning percentage of 0.506 – winning slightly more than half of all games. But there were some clear negative outliers.

Malcolm Glazer was an American Jewish success story. The fifth of seven children of Lithuanian Jewish immigrants, he rose from door-to-door salesman to billionaire real estate tycoon. And when he bought the Tampa Bay Buccaneers in 1995, he quickly turned one of the most moribund franchises in football into a consistent contender, winning the Super Bowl in 2003.

But after he suffered a stroke in 2006, he turned control of the team – as well as English soccer powerhouse Manchester United – over to his children. Since then, and especially after his 2014 death, the teams’ fortunes have consistently slid. In the last decade, the Bucs have had more lawsuits over locker room staphylococcus outbreaks (1) than playoff appearances (0), and the starting quarterback has been subject to multiple sexual assault accusations. On the plus side, Bryan Glazer donated $4 million to build a new Jewish Community Center in West Tampa.

Another heir who has struggled to run a team after his father’s death, Davis took over after the passing of his father Al in 2011. Davis Sr. had always been attracted to colorful characters who, in his words, “Just win, baby,” but his progeny hasn’t been able to channel those talents into victories. Just this year, the Raiders gave up two draft picks for Antonio Brown, who, in the span of a month before the team gave up on him, gave himself severe frostbite on his feet after a cryogenic procedure went wrong; refused to practice because the league wouldn’t let him use his unsafe, 11-year-old, helmet; and reportedly threatened to hit his general manager. (He was accused of sexual assault a few days after his release from the team)

Amidst all this, the Raiders are playing their games in front of a fan base turned off by their impending move to Las Vegas. The naming rights for their new Sin City stadium were bought by Allegiant Air, which is planning on selling travel packages to fans who want to fly to games from the Bay Area. Good luck with that.

Frequently described as “reclusive,” Katz has said that he’s been dealing with a life-threatening sinus infection and other illnesses over the past few years. The Oilers have been the worst team in hockey during the years of his ownership, only reaching the playoffs once. But with superstar Connor McDavid, still only 22, leading the team, the future is looking brighter – they’re currently first in their division.

Harris, a private equity investor, is different from the other owners on the list because for much of his tenure, one of his teams was actively trying to lose. The 76ers, under Harris’s general manager Sam Hinkie, embarked on a multi-year plan, called the “Process,” to lose as many games as possible so that they could get high positions in the NBA Draft, where the worst teams get first crack at picking young players. Trusting the process seems to have finally paid off – it netted the team two superstars in Joel Embiid and Ben Simmons, though Hinkie was fired before his vision reached fruition. (Hinkie’s replacement, Bryan Colangelo, himself resigned last year after it was reported that his wife been leaking sensitive team information via an anonymous Twitter account she used to defend him from critics).

The Devils didn’t have the same ready excuse – they’ve just been bad, finishing seventh or eighth in their division four times in the past six years. And they just fired their head coach.

There isn’t much to say about Snyder that hasn’t already been said. Since buying the team at age 34 in 1999, the once-proud franchise has sunk into mediocrity and alienated fans. Some lowlights: A star player threatened to retire rather than continue to be treated by team doctors, who he claims misdiagnosed his tumor. Cheerleaders were told to be escorts for sponsors and suite holders in Costa Rica. The team was caught selling peanuts from an airline that had gone bankrupt a year earlier.

Oh yeah, and he refuses to rename the team despite complaints that “Redskin” is a racist slur. Dallas Cowboys owner Jerry Jones caused a minor uproar in in 2013 after claiming that Snyder was indeed sensitive to hurting minority feelings because he is Jewish. The Onion published a response a few days later, with the headline “Redskins’ Kike Owner Refuses To Change Team’s Offensive Name.”

Snyder does not seem to have learned much from his tenure. “More than one person familiar with him described — or agreed with the description of — Snyder as someone who behaves the way a little kid imagines a rich person acts,” The Washington Post reported earlier this year.

And here are the five best:

Robert Kraft has had quite an eventful 12 months. In February, he lifted the Lombardi Trophy for the sixth time, thanks in large part to wide receiver Julian Edelman, the first Jewish Super Bowl MVP winner.

But Kraft has since spent much of the rest of the year fighting charges that he solicited prostitutes in Florida the weekend of the AFC championship game. At least he could comfort himself with his newest championship ring – and the million-dollar Genesis Prize for Jewish leadership he received in Israel.

Kraft told the Forward in 2017 that preparing for the Super Bowl is “like studying Talmud or Torah — it’s not just simplistic, it’s deep. We prepare as a team very well, we practice hard.” Despite his success running the Patriots, he hasn’t been as successful with his soccer team, the New England Revolution, which has only had nine winning seasons in its 24 years of existence.

How much credit should an owner get for a team’s success? The answer depends on how you think about Joe Lacob.

By the time he bought the team, the Warriors already had Stephen Curry, who would develop into the greatest shooter of all time – but would the injury-prone Curry have stayed as healthy as he has without the Warriors’ emphasis on high-tech sports medicine?

The Warriors have been the best team in the NBA since Lacob fired their underachieving and unpopular coach Marc Jackson in 2014 and replaced him with Steve Kerr – but shouldn’t Lacob bear some of the blame for hiring Jackson in the first place?

“We’re light-years ahead of probably every other team in structure, in planning, in how we’re going to go about things,” he told The New York Times in 2016. “We’re going to be a handful for the rest of the N.B.A. to deal with for a long time.”

But with starters Kevin Durant and Andre Iguodala now on other teams, and Curry and Klay Thompson out with injuries, the Warriors have struggled mightily this season. Maybe Lacob should lace up?

Also the owner of football’s Atlanta Falcons, the Home Depot co-founder launched the most successful expansion team in American soccer history in 2017, winning the MLS Cup only one year later.

Blank told the Forward in 2017 that he’d thought about why so many sports owners are Jewish.

“It’s about success in America,” he said. “And I think people of our faith seem to do well in things that are connected to other people. This is not a solo effort. I have 31 other partners the day after we play a game. We share revenues. Owners enjoy working together, and that’s part of the history of our faith—working together as a group.”

He announced his retirement as CEO of Microsoft in 2013, but the famously intense Ballmer hasn’t exactly been kicking up his feet on the beach. He purchased the Clippers for $2 billion in 2014 after then-owner Donald Sterling was given a lifetime ban from the league after TMZ published a recording of him making racist comments.

Soon after he purchased the team, Ballmer announced he was working to achieve another goal: having a Bar Mitzvah.

When he’s not trolling President Trump or appearing on “Shark Tank,” you can usually find Cuban sitting courtside at Dallas Mavericks games. Cuban once said, “being Jewish has given me a foundation for everything I am and everything I hope to be.” Hopefully that doesn’t include his on-court conduct: He’s been fined more than $1.5 million since buying the Mavs in 2000 for conduct unbecoming of the league, including yelling at players and refs.

Who Are The Worst – And Best – Jewish Owners In Pro Sports?