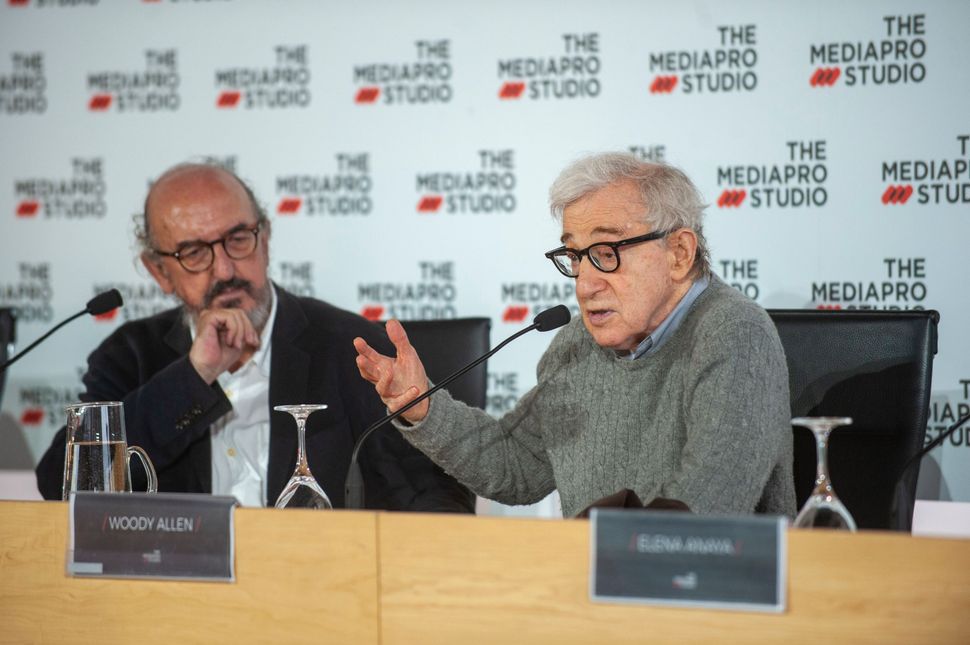 Few still-living artists have tested the premise of the Death of the Author as much as Woody Allen — not so much for what he did, but what he’s accused of doing.

While as a filmmaker, Allen, who turns a vital 85 today, has cemented as indelible a cinematic persona as Chaplin’s Tramp, in the press and forum of public opinion, he now resembles one of his most famous and least Allenesque creations: the unknowable, chameleonic Zelig, who is all things to all people.

Allen is either a hapless victim of a harpy ex-wife intent on revenge, or a predator who had designs on his stepdaughter and molested his own adopted daughter. Revisit that sentence and you will see some commonly-made errors: Allen and Mia Farrow were never married and, as many a terminal asterisk attests, Allen did not have a role in raising his now-wife, Soon-Yi Previn, who he began dating when she was in her 20s (her exact birth date is not known). This sort of correction, on the nature of their pre-romantic dynamic, has been seen in such reputable sources as The New York Times and the Paris Review. It’s so pervasive and specific, one wonders if it’s what Allen’s legal team demands and all they can challenge.

These addendums are pivotal to the received narrative, but they don’t undercut those pieces’ arguments that the comedy, “Manhattan,” which features a relationship between a 42-year-old and a 17-year-old, played by a then 16-year-old, is creepy. If anything, the corrections show just how easy Allen made it to read his life into his fiction and how little he has to quarrel with. And yet, for me, it is the distance between Allen’s recent actions and the character of his best work that is so hard to bridge. I can’t just write a normal tribute when the elephant is, at present, rampaging through the anteroom. The best I can manage is a brief, personal history to explain why I find him so challenging.

In college, my roommates decided to marathon his films (we stopped at the Fellini homage “Stardust Memories” when we learned that we had accidentally ripped a version that was in Italian — needless to say, it took awhile for us to notice). I would see each of his new films at the now-defunct Lincoln Plaza Cinema or watch his old ones on VHS in my cramped Washington Heights apartment. Allen was always charming in these older films. Even when he played a character with dubious ethics, he was typically an underdog and Allen’s portrayal was hard to read as any kind of endorsement.

I bought the out-of-print Eric Lax biography from a cart at the Strand my first year living in the city. I lost it in a move, but remember Allen’s recollections of his childhood Mackinaw coats and derision of schoolyard grotesques, his reverence for Crosby-Hope road movies, his first joke-writing gig courtesy of a distant relative. With Lax, he was winning, humble, in awe of his own success and painfully self-conscious. He wrote lengthy letters and spent hours at record stores and took walks where he composed the plots for his films in his head. It was hard not to like this Woody, and it’s because of this impression — common to generations before me — that I understand why so many are protective of him now.

The first real salvo against Allen from my cohort came around 2017, courtesy of an acquaintance of mine, who himself looks like a young Woody Allen. On Twitter, he admitted he acted in one of Allen’s films, regretted it, believed Dylan Farrow’s 1992 molestation allegation and pledged money to the Rape, Abuse & Incest National Network. The film was “A Rainy Day in New York,” which only recently saw a U.S. release, following Amazon’s shelving of the movie after Allen’s #MeToo comments. (This actor’s young costars picked up the trend, with Timothée Chalamet making headlines for his own apology.)

Not long after this, I (briefly) met Alec Baldwin. In a vague talk about #MeToo, he defended Allen from Dylan Farrow’s accusation by citing the auteur’s endurance of a lie-detector test, thus foreshadowing his own recent exodus from WNYC after the network insisted that he address the allegations against Allen.

Through this maelstrom, Allen has been his own most litigious and outspoken advocate. I’ve found his defense, separate from his on-screen avatars or on set mythology, revelatory. He’s long been hailed as a gentle, intensely private soul. That may be true, but he is anything but timid these days, warning of a “witch hunt atmosphere” while framing himself as a victim of it.

When I was in journalism school, I brought a 2014 New York Times piece Allen had written, denying Dylan Farrow’s accusation, to an op-ed writing class. In it, he argues that a malevolent Mia Farrow coached Dylan into lying — plying her with ice cream. He calls out Farrow’s affairs. He claims he’s too claustrophobic to have assaulted Dylan in the attic and cites as evidence the conclusion of the Child Sexual Abuse Clinic of the Yale-New Haven Hospital assigned to the case. Even the hostile custody judge, who Allen says disapproved of his relationship with Soon-Yi, was forced to state reasonable doubt in his opinion. (“In fairness to Justice Wilk, the public felt the same dismay over Soon-Yi and myself, but despite what it looked like our feelings were authentic and we’ve been happily married for 16 years with two great kids, both adopted.”)

My teacher — a noted polemicist and Gen Xer — and fellow Millennial students ruled his style was too combative and failed to go beyond the superficial “The heart wants what it wants” explanation of his love affair with Previn or to even address that Mia Farrow might have a rightful gripe with her longtime partner beginning a relationship with her adopted daughter.

I had my own take.

To me, the response was a man fighting for his life, using every smear he could against Mia Farrow and deploying all facts, fallacies and character witnesses he can find. He’s not Fielding Mellish cross-examining himself in “Bananas.” He is a counsel on par with Alan Dershowitz, with the fire of Howard Prince, the bookie turned uncooperative HUAC witness in “The Front.” He is a crusader, who believes in nothing so much as his own persecution.

Bret Stephens believes in it too. And so does Wallace Shawn. And Scarlett Johansson. Hachette employees don’t buy it; Skyhorse, the publisher of his memoir, does, along with most of Europe, which lets him film on location and direct operas mostly undisrupted. The Carlyle will likely welcome Allen back to play the clarinet when the pandemic ends, even if young Hollywood parties are out. Amazon’s over him, but they settled the lawsuit.

For better or worse, what we do with Allen’s contemporary legacy has as much to do with these divisive optics as his filmmaking.

In these pages, when I write about Allen, it is usually through the lens of his conduct (as the self-proclaimed “poster boy for the #MeToo movement”), lawsuits or alleged impropriety. This is not because of any vendetta, but because it is the business of the news. Allen is newsworthy today because he’s embroiled, not because he released a film this year, like he has for the bulk of the last half-century.

I get complaints from readers when I write these pieces accusing me of bias or, in the instance of a trailer reaction, kowtowing to the “new culture of the Me Too (bowel) movement.” But I feel I am approaching these pieces objectively — I actually don’t think I can do otherwise.

The truth of the matter is, I am ambivalent to appreciative when it comes to much of Allen’s filmography and decidedly agnostic as to the accusations levelled against him.

But given the fallout of the last few years — the partial doing of Allen’s alleged son Ronan Farrow’s reporting — there is a form of presentism to be applied to Allen’s work. The nervous nebbish persona has been supplanted by a man whose public trials, however justified, are bitter and angry and whose own relevance, having outlasted his best films, stays in the conversation for all the wrong reasons.

And so, while “Sleeper” and “Annie Hall” and — my favorite — “Bananas” might have ripened well enough on their own, they are all but impossible to view on their own terms for me. Character is destiny, and Allen, by placing his alter egos in the frame and scrapping in the public square, has sealed his own.