Documents Signed by Adolf Hitler in 1909 Up for Auction 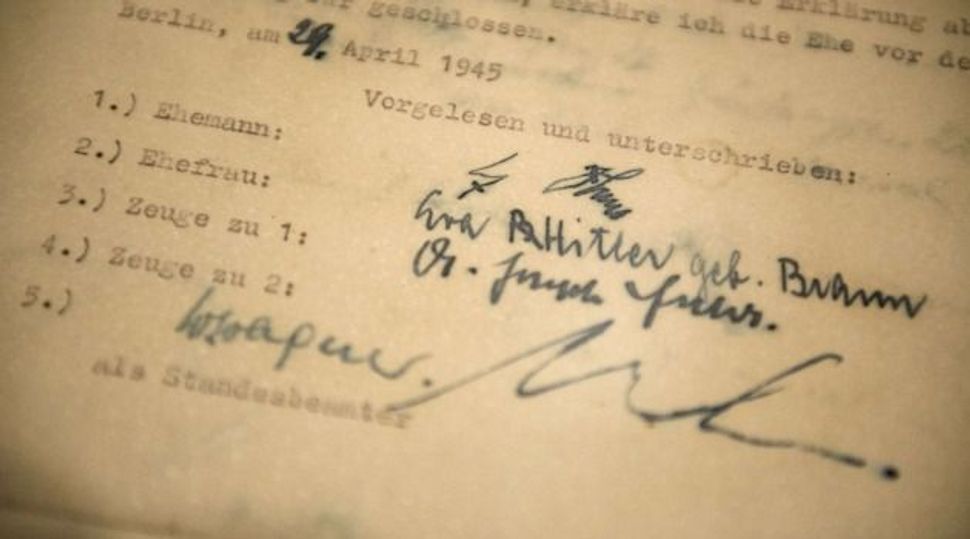 I do: The signatures of Adolf Hitler (top) and Eva Braun (second top), on their marriage certificate dated April 29, 1945. Image by Getty Images

The sale features more than 600 lots and buyers can bid online until March 27.

The “Harry Potter” illustrations by British artist Cliff Wright were used as the covers for the second and third installments of J.K. Rowling’s seven-book series that has become one of the best-selling books worldwide.

A white chiffon and silk dress designed by British designer Zandra Rhodes that was famously worn by the late Princess Diana to a 1987 London benefit is also up for bids starting at $55,000. The dress, which is embellished with pink crystals and pearl beading, is expected to fetch $85,000.

Also on the block is a personally signed letter from Winston Churchill resigning his position as British prime minister.

Churchill, who served a second term as prime minister from October 1951 to April 1955, wrote a two-page letter to Conservative party politician John Harvey on April 6, 1955, stepping down from office, after suffering a series of strokes. Bidding for the letter will start at $10,000.

Hilter’s hand-written and signed Vienna police documents from 1909 will start bidding at $30,000. The documents were a form of residency registration after Hitler changed his address in August 1909, and he listed himself as a writer. The documents precede his rise to leader of Germany in 1933.

Documents Signed by Adolf Hitler in 1909 Up for Auction