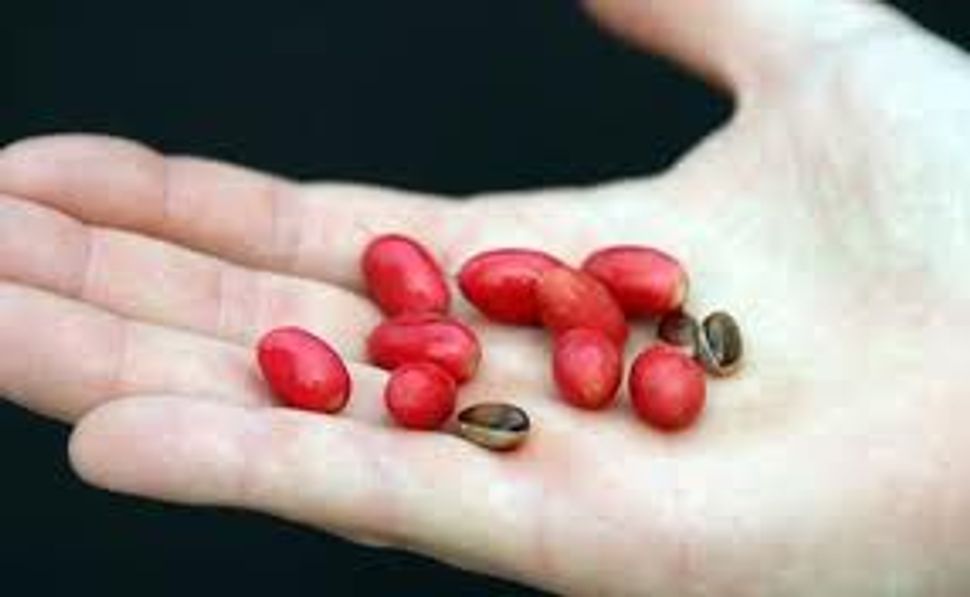 I have often wondered, during yet another endless Yom Kippur service, why we couldn’t do something more engaging of our full selves. Emulate, say, some Native American traditions and have a peyote ritual. Something sweaty, visceral, more likely to have me encounter the Divine than an endless repetition of blood spattering in the Temple. Put the “high” in High Holidays, if you will.

And yet I’m drawn to Jewish tradition. I find myself looking to contextualize new, powerful experiences in the language of Judaism, to ritualize them through the religion of my ancestors. I love deep fried food, hence “Deep Fried Shabbat” has become a staple event in our house for Shabbos Hanukkah.

Purim’s always been the rebel, the James Dean of Jewish Holidays — you get drunk, dress up, get to go trick-or treating (ok, not really but that’s what you told yourself in yeshiva when your mom wouldn’t let you out of the house with so much as a decoder ring on October 31). So it was the natural place for me to create a new ritual, born of something utterly secular and fascinating.

February 2010: I’m watching “CSI” and another fantastic plot foundation that leaves me dying for a job where I get paid to surf the web all day in search of the arcane and bizarre. The specifics are irrelevant other than that they revolved around this so called “miracle berry” that alter your taste buds temporarily. That’s right — you eat this berry and sour or bitter foods taste sweet. “I’m sorry, what’s that?!” I sputter at the TV, “They’ve crossed a line. This is 2010 for god sakes — we have things like Wikipedia. They’ll be debunked faster than you can say ‘A Million Little Pieces’.”

Online I go and, only a few clicks in, I’m staring at the marketingly named “Miracle Berry.” And it’s true — you eat this thing, or the freeze-dried pill form (the berry is a poor traveler apparently) and, for between 1-2 hours, a Meyer lemon will taste like a gumdrop. It’s a diet aid! It cures diabetes! It cures cancer!

It’s awesome chaos in need of a context.

You don’t order a turducken and eat it on a random Tuesday night — you wait for Thanksgiving. You don’t shecht your first water buffalo and roast it on a spit in your backyard, alone — you wait for friends to get married. And I couldn’t just order this little miracle and pop it in my mouth while watching “30 Rock.” That’s when it hit me.

Purim. My favorite holiday, and its central theme of “Nahafoch Hu”, inverting the natural order, was the perfect vehicle to release and elevate the wonder of this food. In the story of Purim, the weak (aka the Jews) ended up safe and strong, while the powerful ended up, well, mostly dead or chastened, and entirely at the last minute and seemingly by chance. And so the theme of “nahafoch hu”, “it was overturned”, referring to the “normal” way of things, became a primary theme for celebrating Purim. It’s why we dress up as other people, why we’re encouraged to drink until reality seems a little less clear. What more actualized representation of the natural order inverted could there be than a feast of lemons, onions and vinegar tasting like a romp through Willy Wonka’s factory? Drink “ad d’lo yada”?* I’d rather eat until healthy tasted like junk, until ascorbic acid tasted like sucrose.

And so it was that we lay out a spread to charm a goat and scare most people, greeting our guests at the door, counter-culture style, with a pill in hand and our own version of “turn on, tune in, drop out.” This was a chance to experience the world anew, to remove all assumptions, to be fresh, alive and curious. And we were — for 2 hours, adults biting into a lemon slice or downing a shot of vinegar with the wonder of a child tasting something for the first time, eager to share our experiences with each other. Everything was new again, all that we knew was unknown and the world was upside down. And it was Purim and it was perfect.

Come to think of it, I’ve read that most peyote rituals involve an incredible deal of vomiting, which tends to make me a bit anti-social. So let’s use another of Purim’s ancient customs, mishloach manot sending gifts of food to friends, to start a new one. Find a miracle berry. Put it in a bag with an onion and a lemon (tradition requires foods of two different blessings, “of the ground” and “of the tree” in this case) and a note that says “Eat Me” and give it to a worthy friend on Purim afternoon. They will never be the same. And isn’t that what religion should always be about?

*lit. “until you do not know”, a shortening of the expression that you should “drink ‘until you do not know’ the difference between Haman (antagonist) and Mordechai (protagonist)”. That’s a lot of booze. Think about not being able to tell Gingrich and Obama apart.

Simon Feil is an insatiable experience junkie, an inveterate storyteller and a Jew. He also likes getting paid to do things he loves www.sushibysimon.com and www.simonfeil.com