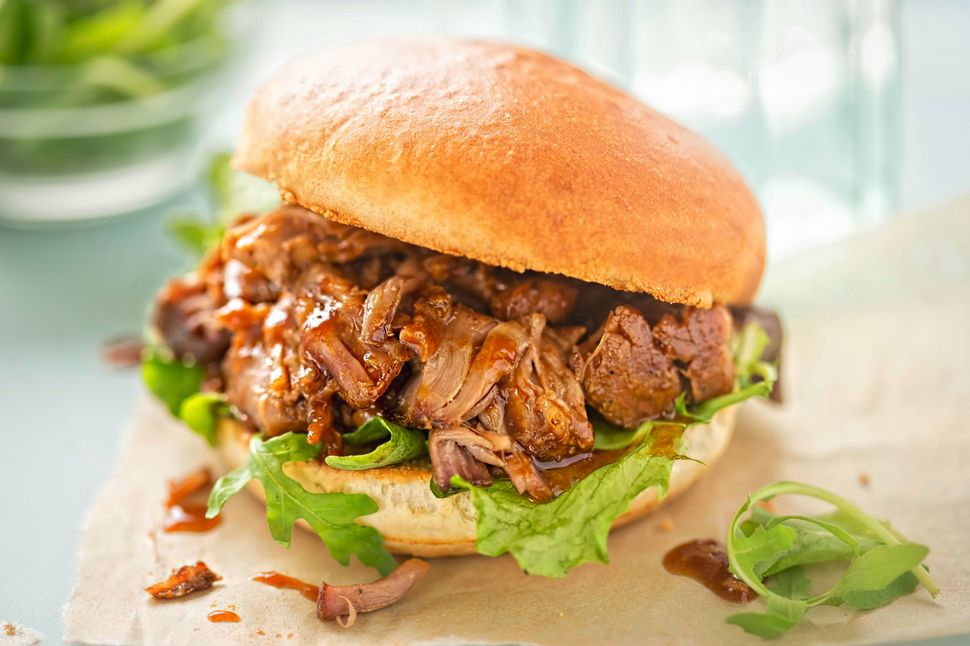 If you’re looking to rebel with a little something extra, this might be the most non-kosher sandwich of all time.

Fit George Forman Rapid Grill Series with ceramic grill plates and preheat to 400 degrees. Take pork out of marinade and dab off excess mustard sauce with a paper towel. Season with salt and pepper and place on hot grill. Grill for about 5 minutes a side, until caramelized on all sides and interior temperature is at 145. Set aside to rest. Slice tenderloin thin with a sharp knife and set aside for sandwich build.

Brush one side of each slice of bread with olive oil.

about 4-5 thin slices of the tenderloin

about 6 slices of ham, ribboned high

Top with slaw, dash of dressing, and one more piece of cheese. Place last slice of olive-oiled bread on top and place on grill until golden brown and cheese is melted.

Cut on the bias and serve!

The Mauro Method* for Crispy Bacon

Heat oven to 375. Place bacon on a sheet tray with parchment overlapping each side about 1-2 inches. Bake, Rotating once, until desired crispiness, about 15-20 minutes. Remove bacon and let drain. Set aside pan and let cool, once cool, carefully toss the parchment with the solidified fat directly in the garbage or reserve fat for future use.

*The Mauro Method insures a crisp cook and easy cleanup with no stove top splatter. Because you overlap the parchment around the perimeter of the sheet pan, the fat will render and “pool” around the bacon, just like a frying pan, and will fry the bacon to a perfect crisp. Because of the parchment barrier, the fat will not come in contact with the metal, creating a mess or burning the fat. Once fat is cooled on parchment, just toss in the garbage! No draining or messy scrubbing!