Why U.S. Won’t Give Israel Bunker-Busting Bombs After All 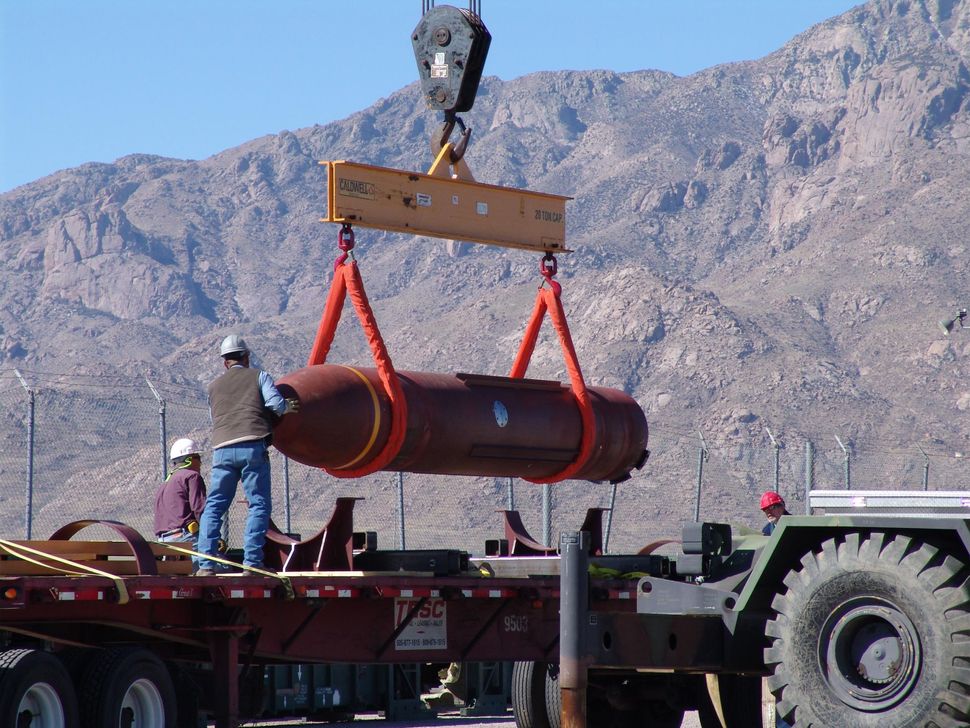 It weighs more than seven average cars, is taller than a two-story building when upright, and can penetrate the ground to 200-feet, making it by far the heaviest piece of conventional weaponry held by a modern-day military.

The Massive Ordnance Penetrator, which has never been used in combat, was built to allow American forces the ability to penetrate even the most fortified of enemy bunkers, dug deep in the ground and protected by walls of concrete.

But as powerful as the MOP is in depriving enemies of their most guarded facilities, it is also, as demonstrated in recent months, a useful political tool. The MOP, it turns out, has been used to shield elected officials from criticism and to show their unwavering support for a Middle East ally whose own desire for the weapon was nonexistent.

As the nuclear negotiations with Iran neared fruition, lawmakers from both sides of the aisle rushed to adopt the idea of providing Israel with MOPs to be used as the ultimate military response in case Iran does not cease its underground nuclear activity.

The idea to supply Israel with this massive piece of ammunition was supposed to serve as the strongest possible statement of support for the State of Israel in light of a nuclear agreement, which was viewed as imperfect from an Israeli security standpoint. But the notion never survived the test of reality. Described by a former Israeli commander as a “pair of shoes many sizes too large” for the Israeli Air Force, the idea of supplying Israel with MOPs was never embraced by its intended beneficiaries, the Israelis, and was finally dropped from congressional legislation by the end of September.

One of the fathers of the plan explained that providing America’s largest ordnance to Israel was an idea that was never meant to be implemented after an agreement with Iran was actually reached.

“Conditions now are different than at the time we presented the idea,” said David Deptula, a retired lieutenant general of the Air Force, who initially suggested the transfer of MOPs to Israel in an April 7 Wall Street Journal opinion piece he co-wrote with Michael Makovsky, CEO of the Jewish Institute for National Security Affairs. In an interview with the Forward, Deptula explained that the idea of transferring the massive bomb to Israel was to allow America and its allies more leverage in their negotiations with Iran by proving “that there really is a military option.” But once the deal was signed, Deptula added, it would be up to Israel to decide if it really needs the system and, ultimately, up to the United States to use these means by its own air force if needed in case Iran does not live up to its end of the deal.

But while the military experts behind the notion saw the supply of MOPs to Israel as a bargaining position meant to strengthen America’s negotiating hand, the idea took on a life of its own and was adopted by lawmakers on Capitol Hill. Members of Congress viewed it as a way of proving their pro-Israel credentials.

“It’s time to give Israel the means to take out Iranian nukes,” Democrat Grace Meng and Republican Lee Zeldin, both representatives from New York, declared in a bipartisan New York Post opinion editorial published May 17, before the nuclear deal was signed in Vienna. The lawmakers, who quoted Deptula and Makovsky’s article, noted that “transferring MOPs to Israel would also help assuage the concerns of Congress and our Middle East allies, who are wary of the emerging deal.”

After the deal was signed, and congress began a two-month review process, Democrats and Republicans in the Senate also began taking a liking to the idea.

New Jersey Democrat Cory Booker, who was under intense pressure to vote against the deal, didn’t announce his position until September 3, as the debate drew to an end. Booker, to the chagrin of many of his pro-Israel supporters, decided to back the agreement. But in an effort to blunt the impact, he added a list of moves the administration should take to bolster Israel’s security, including access to MOPs “to help deter Iranian cheating.”

Maryland Democrat Ben Cardin found himself in a similar position. The Jewish lawmaker, who is the ranking Democrat on the Senate Foreign Relations Committee, was a subject of fierce lobbying and eventually came out against the deal.

Cardin did not speak out publicly about providing MOPs to Israel, but as the chief author of a bill intended to bolster Israel’s security in a post-deal situation, Cardin was viewed by his peers as supportive of the idea.

In fact, an early draft of the Iran Policy Oversight Act of 2015, specifically authorizes the president to provide Israel with the bombs, stating, “If the Governments of Israel and the United States determine that the threat from Iran against Israel so warrants, the President may transfer to the [Government of Israel] any MOPs, and the means to deliver MOPs.”

On the Republican side, Senator Tom Cotton, an early critic of the Iran deal, also embraced the idea of equipping Israel with the massive bomb alongside the needed delivery capabilities.

Days after the deal was signed, former Obama Middle East adviser Dennis Ross proposed that the administration provide Israel with MOPs in order to “give our words greater capability.”

But as the idea began to gain support, critics started listing their misgivings. Many key aspects of the plan, they warned, had been overlooked.

First and foremost was the fact that Israel had never asked for the MOPs and did not provide the administration or Congress with any indication that it supported efforts to advance the idea.

Former top Israeli Air Force commanders spoke out openly against the idea, with Giora Romm, a retired major general, telling Defense News that Israel lacked the infrastructure to integrate the system. Another Air Force retired commander, Eitan Ben Eliyahu, said that the B-52 planes able to deliver MOPs are vulnerable to Iranian air defense systems and could not be introduced into the arena easily.

Others have pointed to the huge cost of purchasing and maintaining the MOPs and bomber aircrafts able to deliver them, noting that it would not be in Israel’s interest to divert money from its fighter jet procurement program to fund the massive bunker buster operation.

Then there was the problem of complying with one of the key weapons control treaties crucial to U.S.-Russian relations. Providing Israel with MOP bombs would necessarily involve also providing it with B-52 aircraft, or the more advanced B-2 planes — the only aircraft capable of delivering the weapon. But since both are fitted for carrying nuclear bombs, the new START treaty prohibits the United States from transferring them to other countries.

“This was an ill-thought, provocative, counterproductive proposal,” said Kingston Reif, director for disarmament and threat reduction policy at the Arms Control Association. He added that providing Israel with MOPs would send the wrong message to Iran and get the nuclear deal “off on the wrong foot.”

Pushback from the administration and experts, and the clear lack of enthusiasm from Israel and its supporters in Washington, eventually led to the removal of any mention of MOPs from the final legislation draft presented to the Senate. A source close to Cardin said that he believes it is premature to talk about specific weapons systems and that the bill as currently written “allows more flexibility on what might be appropriate as the situation on the ground develops.”

At the end of the day, the debate over providing Israel with America’s largest bomb had the appearance of a staged exercise. But as a political cover for supporters of Israel, the Massive Ordnance Penetrator had its first successful run. “The question is if this was ever meant to be a serious proposal,” Reif said, “or was it a way for Democrats in Congress to demonstrate their commitment to Israel.”

Why U.S. Won’t Give Israel Bunker-Busting Bombs After All