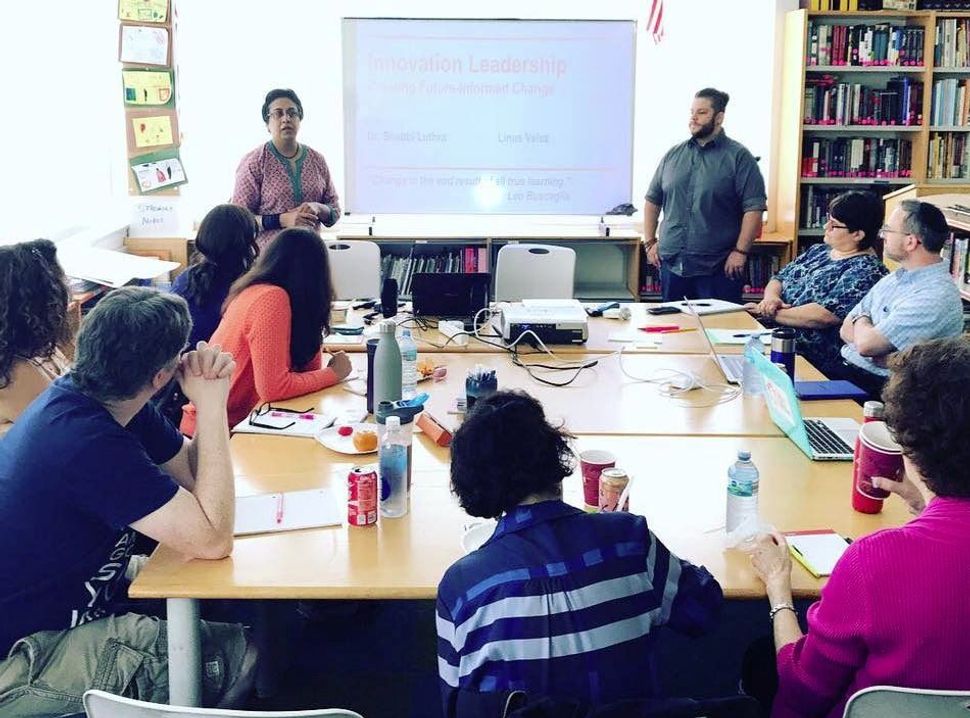 In many ways, Jewish education has remained unchanged for centuries. Students and teachers read texts together, and then they analyze them. But the 21st century has become an age of an unprecedented amount of information, all downloadable in seconds. In just a few decades, it’s already changed the way we think and absorb the world.

Eliezer Jones, the new head of school at Akiba-Schechter Jewish Day School in Chicago, believes that education needs to evolve to accommodate those changes. “In general,” he said, “educators need to teach skills to children so they will be more flexible when they leave school. They’re living in a global world. Kids are connected everywhere. They need the skills to navigate that.”

But what’s the best way to make those changes? The annals of education are filled with innovations that failed to catch on—open classrooms, the Socratic method for kindergarteners, New Math—and only resulted in confusing students instead of helping them learn.

Jones decided to look to the business world. Many corporations, he noticed, don’t just impose wholesale changes right away. Instead, they have research and development labs, where they study the feasibility of new ideas and methods and test them on small groups before imposing them on the entire company. Why, he wondered, did no one set up R&D labs in schools?

He began doing some research and discovered the book “R&D Your School: How to Start, Grow, and Sustain Your School’s Innovation Engine.” It was based on methods that co-author Shabbi Luthra had developed at the American School of Bombay. Jones contacted Luthra and asked for her advice. Then, with the help of a grant from the Jewish Education Innovation Challenge, he brought her to Chicago to train a group of teachers at Akiba-Schechter.

Participation in Akiba-Schechter’s R&D team is entirely voluntary. Twelve faculty and staff members attended the weeklong training session earlier this month. They learned the rudiments of “design thinking” to construct solutions to problems, as well as how to create prototypes and how to adjust them if they failed. They also discussed the bigger changes they wanted to see in the school, and set up a structure to evaluate proposals for changes, in order to strike a balance between introducing programs too quickly before they’re properly thought through and spending so much time philosophizing that nothing ever happens.

“The R&D department will provide a place for people already doing innovative things to be more thorough in their approach,” said Miriam Kass, Akiba-Schechter’s principal. “We can incorporate those things into the school or not. Not all innovations end up being the right fit. We need to acknowledge things that don’t work are as important as building up things that do. The design thinking process will allow us to be really methodical and careful within a very creative place.”

Jones was initially concerned about the school community’s response to the R&D approach. Jewish education, he noted, is particularly tied to tradition. “There’s a fear that if we make change,” he said, “we’re not honoring tradition. There’s not a masorah [tradition] of teaching. There is a masorah to want to pass on knowledge in the most effective way.”

Akiba-Schechter, however, had already shown an openness to new forms of education. Last year, the school experimented with theme-based teaching. Jones said the students responded much better than they did to the traditional linear model, although the content was the same. “I’ve been getting a lot of positive feedback [for the R&D lab],” he said. “Of course, I don’t know what people are saying behind my back.”

But Kass said that school community has been receptive. She is looking forward to coming up with new prototypes for the schedule. “It’s mundane, I know,” she said, “but the schedule is what drives the student experience. We’ve been locked into a half-day of general studies and a half-day of Judaic studies with 40-minute class periods for a long time. Students are not best served in those schedules. What could we do if we break that open and look at it from a variety of perspectives?”

Opening up the schedule, Kass said, would allow more freedom to integrate the Jewish and general studies curricula. It would also make it easier to bring more teachers on full-time, which would create a greater sense of community within the school. She hopes it will create more opportunities for experiential learning, including, possibly, a maker lab.

At the moment, Akiba-Schechter is one of the only schools in the country, and the only Jewish day school, to employ the R&D model. But Jones wants it to become a template for other schools, and wants his teachers to become known as experts in design thinking and innovation.

“What’s happening in education is fantastic and amazing right now,” he said. “If you’re reading this, if you’re a parent, get involved in the conversation. We’re not in a world anymore where you drop kids off and hope things go well. There needs to be a conversation about how to teach, how to learn, how to do school. Community leaders, members should all be having this conversation. We’re all responsible for having good schools for kids.”