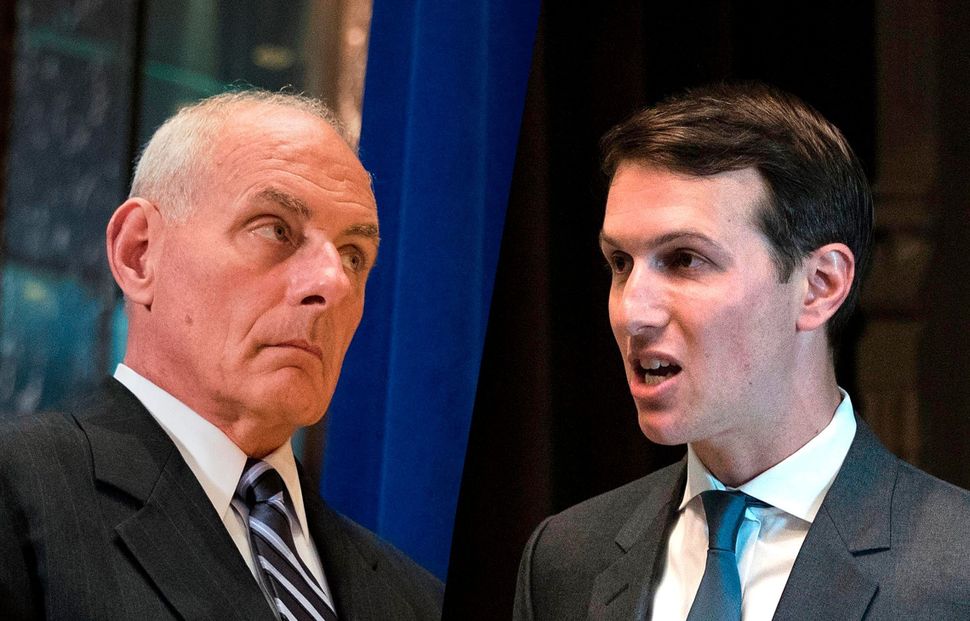 Jared Kushner and Ivanka Trump left behind another horrible week at the White House last weekend, trading Washington’s political swamp for the a sunny Caribbean vacation. But as he left, Kushner found that his unfettered access to intelligence material in the White House may soon be limited, with his temporary security clearance rendered invalid.

Kushner, who despite his boyish look and soft voice has proved to be more than capable of winning White House turf wars, is now facing a formidable rival — White House Chief of Staff John Kelly. In this new rivalry, Kushner now seems to play the role of the swamp-dweller, the insider refusing to accept rules of good governance Kelly is trying to enforce.

In a memo issued February 16, Kelly made clear that White House staffers whose background checks had been pending since June 1 will lose their temporary security clearance starting on February 23. This very specific deadline leaves Kushner, still operating on an interim clearance, out in the cold. Some saw the move as a specific jab at Kushner, an attempt by Kelly to reshuffle the White House pecking order and assert his role as Trump’s right-hand man.

For Kushner, the 37-year-old senior adviser, losing security clearance would not only cut him off from daily intelligence briefings, but could also make his life as the Trump administration’s Middle East point man even harder. Advancing Israeli-Palestinian peace is among Kushner’s top priorities and one of the few still left in his once-hefty portfolio. Experts believe that when making peace in the Middle East, negotiating with Arab and Israeli leaders, and sitting in on presidential meetings with regional leaders, access to classified information and top secret intelligence assessments is crucial.

“It’s absolutely critical that [Kushner] have access to the most sensitive intelligence information to know what’s going on,” the former Director of National Intelligence, James Clapper, told CNN.

The White House refused to provide specific information regarding the security clearance status of Kushner or other members of Trump’s Middle East peace team. But it made clear that the issue would not impact their work on advancing a plan for resolving the Israeli-Palestinian conflict.

“As I told Jared days ago, I have full confidence in his ability to continue performing his duties in his foreign policy portfolio including overseeing our Israeli-Palestinian peace effort and serving as an integral part of our relationship with Mexico,” Kelly said in a statement passed on to the Forward by the White House. “Everyone in the White House is grateful for these valuable contributions to furthering the President’s agenda. There is no truth to any suggestion otherwise.”

First, it begs the question: What is holding up Kushner’s background check?

The answer is two-fold: In part, Kushner’s trouble stems from the fact that he started the process late and did not take it seriously enough. According to multiple reports, Kushner’s initial responses to the FBI’s detailed background check questionnaire were lacking details of many of his contacts with foreign officials and his overseas travel.

Kushner kept amending and supplementing his responses, but only completed the process in June, six months after assuming his role as senior adviser to the president. Kushner’s extensive ties with foreign investors and business partners already make his background check more complicated. Some of these ties, including with a Russian banker during the transition period, are now under scrutiny by special counsel Robert Mueller.

Will Kushner be able to do his job without full access to classified material?

According to reports based on White House sources, Kushner is an avid consumer of classified information and reads not only the president’s daily briefings but also specific intel regarding parts of the globe he is focused on. Limiting his access could impinge on his work, though even if Kushner’s clearance is eliminated, it is not likely to cause real problems in his current work repairing the Middle East and U.S.-Mexico relations.

“You always need access to information, but at the end of the day Middle East peacemaking is about diplomacy,” a former negotiator who asked not to be named when discussing intelligence issues told the Forward.

The former official noted, however, that if peace talks reach later stages involving bilateral meetings with major leaders, they would have to discuss details like military arrangements and intelligence sharing plans, to which Kushner might no longer have access. In addition, American negotiators like to see intelligence assessments ahead of time in order to evaluate the political and internal risks that parties may need to confront at home.

Ultimately, though, the biggest question now facing Kushner is whether he will overcome attempts by Kelly to and enforce new White House rules and rein him in.

Kelly enjoys Trump’s backing due to his success at ensuring the White House runs more smoothly than during the administration’s tumultuous first few months. But Kushner, Trump’s son-in-law, has the advantage of being closer than any other official to the president — save perhaps Kushner’s wife, Ivanka. If internal tensions over Kushner’s intel access get too heated, Trump would likely go with his beloved son-in-law, not his highly-appreciated chief of staff.