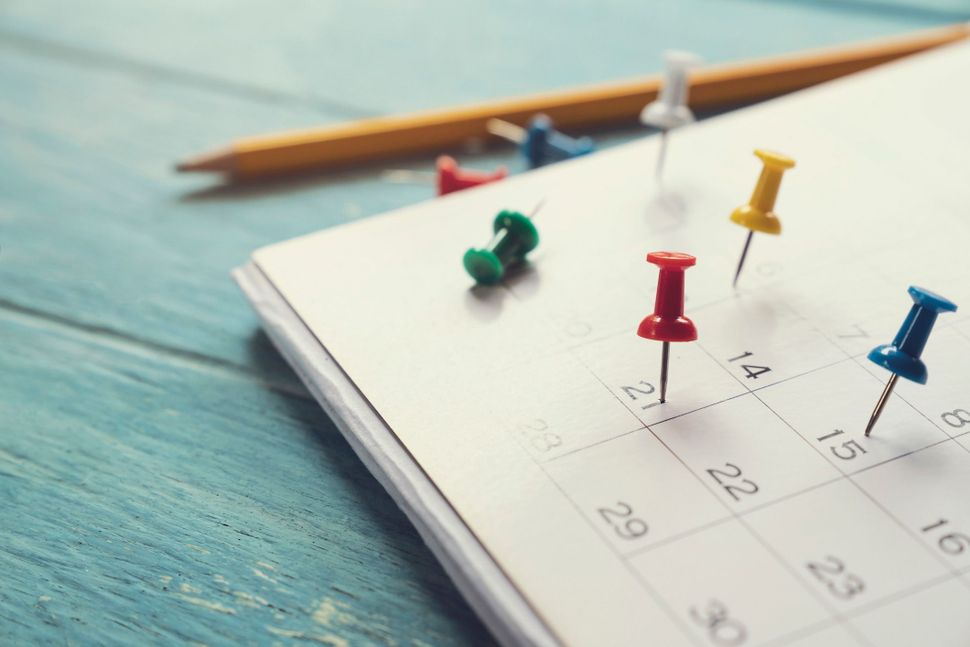 An interfaith coalition is working to reform the county’s school calendar to include days off for non-Christian holidays. Photo by Tatomm/iStock by Getty Images

Rabbi Jessica Wainer joined a task force on religious observance created by the Fairfax County School Board last year. The committee was convened to address food, curriculum, clothing, and other religious accommodations. But as its first goal, the group of Jewish, Muslim, Sikh, Hindu and other minority religion representatives chose what they thought would be the simplest — adding a handful of non-Christian holidays to the days schools would be closed.

She and other members of the group had seen students face academic consequences and social pressures for observing their family’s customs. Whether it’s exams on Rosh Hashanah, field trips on Diwali, homecoming games and parties on Eid, or mandatory test-prep sessions on Yom Kippur, the calendar was filled with conflicts forcing students to either sacrifice core parts of their school experience or compromise on their religious obligations.

“Our students are being placed in these precarious situations where they’re having to make choices between their religious observance and their academics,” said Wainer, associate rabbi at Northern Virginia Hebrew Congregation, “and they shouldn’t have to make that choice.”

After nearly a year of presentations, deliberations, and consensus votes, the approximately 25-member task force presented the school board with two calendar options (A and B), each adding Rosh Hashanah, Yom Kippur, Diwali and Eid to the days off. Three neighboring districts have since adopted some or all of the holidays as days off.

But the 12-member elected school board decided on Feb. 2 that a third calendar, “Option C,” calendar was the likely choice for the 2021-22 school year. It added no new holidays off. Ahead of a final vote slated for March 18, a broader interfaith coalition has rallied against “Option C,” with nearly 100 faith leaders signing a letter expressing “deep dismay,” and more than 300 students signing a petition calling for the days off.

“Calendar C really caught us off guard. It wasn’t a calendar any of us had seen before,” Wainer, the rabbi on the task force, said in an interview. “I feel like, right now, the Fairfax County Public School district is not supporting religious minority students in the ways that they could be.”

Guila Franklin Siegel, the associate director of the Jewish Community Relations Council (JCRC) of Greater Washington, said that at least 1,000 Fairfax County residents have also emailed their school-board representatives demanding a calendar change. She noted that the Jewish population in northern Virginia, which includes Fairfax, had swelled by 80% between 2003 and 2017, and said that Hindu and Muslim populations in the district have “dramatically increased” as well.

“The JCRC has for years been receiving complaints from parents, rabbis, and students about consistent failures in the Fairfax county public schools’ ability to successfully implement and enforce guidelines for religious accommodations,” Siegel said. “It’s something we deal with every year, and it’s a source of tremendous frustration and stress for Jewish students.”

Fairfax, about a half hour outside Washington and home to Dulles International Airport, is the largest school system in Virginia and one of the largest in the country, with 188,000 students and 198 schools. There is no reliable census of how many public schools give the Jewish high holidays off; Philadelphia and New York City’s districts are among a handful to include the Muslim holiday of Eid as a no-school day; Los Angeles and Houston have created options for excused absences to accommodate students.

Hurunnessa Fariad, the head of outreach at the All Dulles Area Muslim Society, said that making students pick between celebrating with their families and attending school puts them in “extremely difficult” positions, and that “a big amount” of students end up missing classes every year for Eid.

At the Feb. 2 meeting, Scott Brabrand, the board’s superintendent, said that in setting the calendar, officials were “trying to balance religious equity on one hand, with pandemic equity on the other.” He did not respond to a request for an interview.

Laura Jane Cohen, a member of the board, said in an interview that district employees had raised concerns that adding holidays could leave bus drivers, custodians and food-service workers, among others, with fewer paid workdays.

But Cohen said those concerns are “not insurmountable,” and that she supports the minority holidays being added as days off. She said a fourth calendar option will be presented this month, after a March 2 meeting at which she and other board members asked Brabrand, the superintendent, to, as she described it, “go back to the drawing board and hopefully give us something that can marry those needs.”

“One of our Jewish values is that we have an obligation to always look out for those who are on the fringe,” Cohen said. “Some of our hourly wage earners are living below poverty, even though they work for the school system, so we want to make sure we’re doing our best not to do things on their backs.”

The Anti-Defamation League declined to take a stance on the Fairfax calendar, but has on its website a general statement on the responsibility of schools and workplaces to make “diligent efforts” to accommodate observance of the High Holidays.

Ensuring all religious minorities are represented

Avi Holzman, a senior at South Lake High School and a congregant at Northern Virginia Hebrew Congregation, said the calendar accommodations are “long overdue.” He said the proposed calendar, with no holiday adjustments — is “really frustrating.”

Throughout his school years, Holzman said, he has often asked teachers not to schedule tests on Rosh Hashanah and Yom Kippur. “But I’ve had teachers say, ‘I’m sorry, we’re so jam-packed with the curriculum that that can’t happen.’”

Cohen said that speaking with constituents about the calendar has been eye-opening. In her own family, she had taken the stance that being a part of “a minority faith means the rest of the world isn’t going to accommodate you,” Cohen said, and simply taken her children out of school to attend services on the high holidays.

“But the truth is I don’t think that’s real,” she said. “The consequences have been significant and for some kids have felt pretty dire.” While she used to favor a calendar without additional holidays, Cohen said, “I’ve really had a change of heart in talking to the community.”

For the organizers themselves, uplifting each others’ voices in the process — across faith divides — has become as important as achieving the new calendar.

“Although the focus is on these holidays,” said Fariad, the Muslim leader, “all of us on the task force are really trying to advocate for each other, and I think that speaks volumes. We’re not just focusing on our own faith background. We want to make sure that other religious minorities are represented as well.”

Wainer, one of the rabbis on the committee, wanted to make clear that “this is not just a Jewish issue — this is an issue of all religious minorities in this county.”

“We want to make sure that our religious minorities are being treated equitably,” she said.