Why climate anxiety is familiar to some Jews 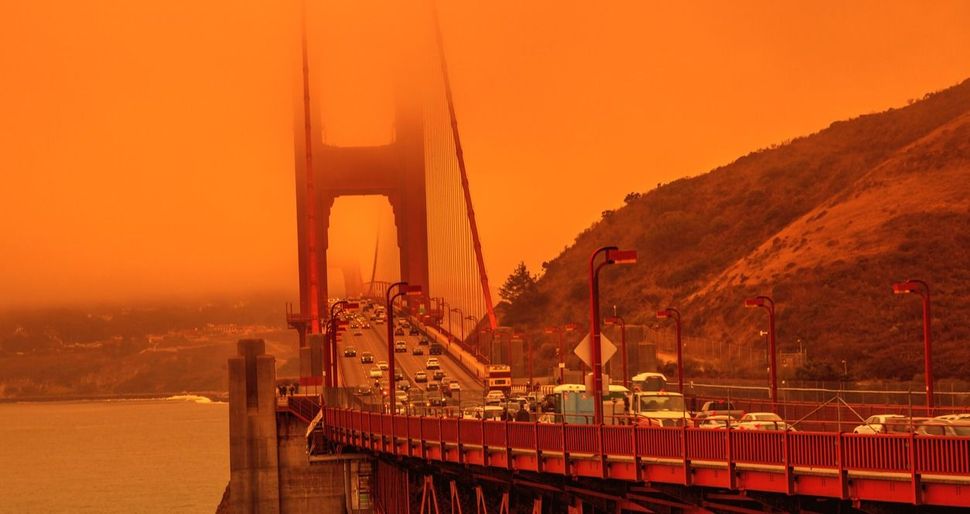 How the Holocaust and intergenerational trauma relate to this existential threat to our planet. Photo by Benny Marty/iStock

One morning this spring I was circling the yard behind my apartment on the phone with my therapist. I’d perfected the particular choreography of our virtual sessions. Pacing the largest outside area that didn’t necessitate a mask, I rolled exercise into the process of analyzing my family dynamics or my self-confidence deficit or my gnawing sense of existential doom.

That week, the topic was doom. Specifically, the climate crisis. As I attempted to unravel my knotted mess of feelings, differentiating the dread from the anxiety and the helplessness from the despair, she stopped me. “Were any of your grandparents Holocaust survivors?” she asked.

“No, they weren’t,” I replied. Taken aback, I started to scroll back through what I had said to find what might have tipped her off. Was it my lack of faith in governments and corporations to work in the best interest of humanity? Or expressing my primal sense of need to stay physically close to loved ones in an attempt to ensure our safety?

Our session moved on, but the connections began to crystallize. In some discussions of Jewish history and antisemitism, there’s an implication that Jewish safety is unstable and strictly time-limited. We talk about antisemitism not simply because hate and discrimination are bad but because we fear it portends a looming existential threat.

Though the climate crisis and antisemitism pose vastly different dangers, could my anxiety response toward one have been trained by the other? The pit that plunges deep into my stomach when an alarming headline pops up on my Facebook feed feels like the fear I felt as a child learning about the Holocaust and wondering who would hide my family if it happened again.

“Scarcity, displacement, destruction, annihilation — these are certainly part of our collective Jewish psyche.”

‘Part of our collective Jewish psyche’

A 2017 report from the American Psychological Association (APA) defines climate anxiety or “ecoanxiety” as a “chronic fear of environmental doom.” In addition to the acute physical and psychological traumatizing effects of living through a climate change-induced wildfire or flood, ecoanxiety covers the slower, more constant sense of distress of living with an awareness of the effects of climate change.

“We are facing a situation where some people are ringing an alarm bell very loudly, and other people are not hearing it,” said Dr. Rachel Yehuda.

Intergenerational trauma might explain the increased sensitivity some Jews feel toward threats like climate change or antisemitism. “Some people hear an alarm and they hit the deck. Some people say ‘What is that noise in the background interfering with me enjoying my life?’” Yehuda said. “Chances are, the person who’s hitting the deck is a trauma survivor.”

“Scarcity, displacement, destruction, annihilation — these are certainly part of our collective Jewish psyche. It is quite possible that this plays into climate anxiety for Jews,” said Rabbi Jennie Rosenn, the founder and CEO of Dayenu: A Jewish Call to Climate Action. “But, I also think we hardly have a monopoly on these experiences.”

Rosenn was visiting her father in San Francisco, Calif. when her climate anxiety reached a new level. It was August, and there was a heat wave that shut down the city. “I remember thinking that it felt apocalyptic; the antithesis of like things were okay,” she said.

For Rosenn, climate anxiety is a constant. “It’s like when you wake up and then remember some terrible news,” she said. “In this case, the news is that the future of humanity and our planet are on the brink of destruction.”

Now, as the leader of Dayenu, Rosenn helps others work through their climate anxiety to take action. “People are at a loss as to how to authentically live, teach, parent and come of age in this new reality,” she said. “Furthermore, our feelings of powerlessness overwhelm and inhibit activism.”

“I think people don’t realize the importance of feeling the feelings,” said Rachel Binstock. “Being with the pain and anxiety is the first step in confronting the climate crisis.”

Binstock began organizing for divestment from fossil fuels as a college student more than a decade ago, but her climate anxiety was merely hypothetical until she moved to the west coast, she said.

After leaving California in part due to fear of earthquakes, wildfires and lack of water access, Binstock moved to southern Oregon, where hundreds of homes burned in fires last September. “It rocked me to my core,” she said. “I have never felt so scared.”

Binstock grew up in an upper-middle class suburban family concerned about antisemitism. “I see that climate stirs for some Jews the familiar anxiety associated with an existential threat to survival,” she said, “but I have also seen that some Jews have an aversion to taking it in and I’m not sure why.”

“I think that some American Jews are used to responding to antisemitism within a context that is controllable,” Binstock said. “That control is not possible with climate.”

Still, Binstock wants to see joy and hope alongside anxiety and grief in climate activism. “We must resource ourselves to show up for a big and bold vision of a thriving future for our children’s children, and honor the imperative to pass this planet on l’dor v’dor,” she said, using the Hebrew phrase for “from generation to generation.”

“We have faced destruction over and over again throughout Jewish history and each time we have not only survived, but have thrived,” Rosenn said. “This has happened by facing the reality of devastation and reimagining and rebuilding a different future.”

Why climate anxiety is familiar to some Jews