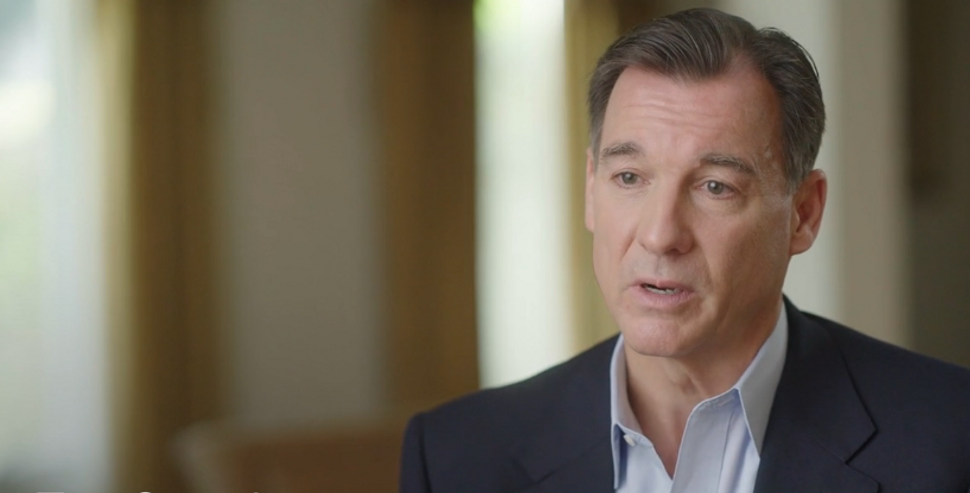 Tom Suozzi, a Democratic Congressman from New York, sees his current bid for governor of New York as a moment of ”bashert,” a Yiddish term often used to express the seeming fate of an important event. He is one of at least three candidates who are competing in next year’s Democratic primary against the incumbent, Kathy Hochul, who replaced former Gov. Andrew Cuomo after his resignation in August.

“The state is in a lot of trouble, and I feel like everything I’ve done in my career has prepared me for this particular job at this time,” Suozzi, 59, said in an interview with the Forward at a Brooklyn pizza shop on Sunday. 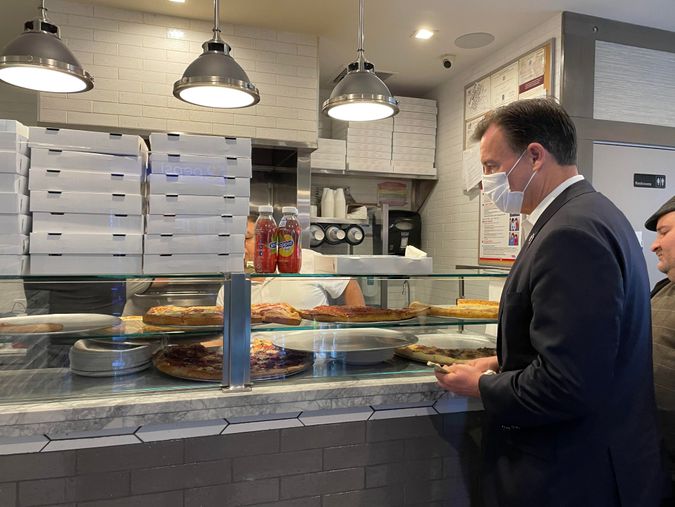 He was first elected as mayor of Glen Cove, a city in Nassau County, New York at age 30, and went on to serve as county executive, before succeeding former Congressman Steve Israel in New York’s third district following his retirement in 2016. Suozzi also ran for governor in 2006 but lost to Eliot Spitzer, who resigned in a prostitution scandal a short time after assuming office.

“I then learned the Yiddish saying, ‘Mensch tracht un Gott lacht’ – man plans and God laughs,” he said about that race. “Whatever is bashert is going to happen anyway, and I feel like this is my time.”

In Congress, Suozzi has established himself as a common-sense Democrat who reaches across the aisle to get things done for his district. He is vice-chair of the Problem Solver’s Caucus that consists of 56 members, evenly split between Democrats and Republicans. His first House floor speech was in support of Israel, after the Obama administration allowed the passage of the U.N. Security Council resolution (UNSC 2334) condemning Israeli settlements in the occupied. West Bank.

Peppering the hour-long conversation with Yiddish and Hebrew terms – while eating a vegetable and a Sicilian pizza and being disrupted by patrons who wished him luck – Suozzi said he is best suited to serve as governor given his experience and pro-Israel stance. “My goal is to be known as the most reliable non-Jewish Democrat,” he said. “I’m standing up to the far-left and to the far-right.”

In recent weeks, Suozzi has undertaken an effort to court leaders of Orthodox voting blocs, taking a page out of Eric Adams’ playbook in his successful campaign for New York City mayor. Jewish voters make up an estimated 15% of the electorate in New York’s Democratic primaries. His pitch is also similar to Adams – who initially offered Suozzi a top job in his administration – of being tough on crime and offering the Jewish community a seat at the table. 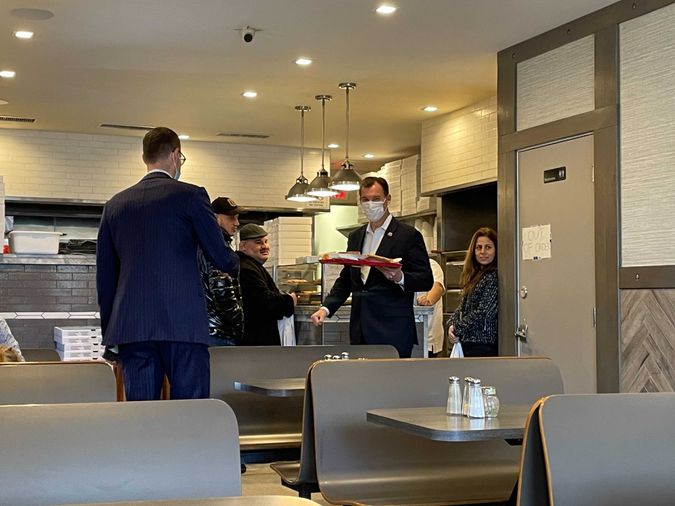 Tom Suozzi, a New York Congressman who’s running for governor of New York, carries a tray of pizza at Pizza Times in Brooklyn on December 19, 2021

Suozzi described the current governor, who is considered a close friend of the New York Jewish community, as inexperienced and as being inconsistent to pander to the left of her party and earn their backing. He pointed to her endorsement of a Democratic Socialist candidate, Felicia Singh, in the New York City Council elections, and her refusal to back Buffalo Mayor Byron Brown in a write-in campaign after he was defeated by India Walton, a socialist candidate in the Democratic primary. “I’m not pandering, I’m not checking the political winds,” he said. “I’m saying straight out what needs to be done to move our state forward.”

A campaign official, who requested anonymity to freely discuss the campaign’s strategy, pointed to Adams’ offer for Suozzi to serve as deputy mayor as a vote of confidence. The official also pushed back against the perception that Hochul would be tough to beat after Letitia James, the state’s attorney general, withdrew from her short bid to become governor. The official listed off a number of early frontrunners in the 2013 and 2020 races for New York City mayor and Hillary Clinton’s perceived inviability in her two presidential runs as proof that things could change along the way. He has already launched a series of tele-town halls to engage with voters across the state – the first event has more than 5,000 participants, the campaign said – and has done a couple of COVID-related press briefings over Zoom.

Bill de Blasio, the outgoing mayor, has sent strong indications that he is expected to join the race for governor, splitting the New York City and progressive vote between Hochul and Jumaane Williams, the city’s public advocate.

Suozzi maintained that his long-standing relationships – including a close alliance with Eric Adams, who’s popular in the Orthodox community – his experience and communications skills will give him the edge among key voting blocs, as he acknowledged that Hochul will get the backing of the Democratic establishment. “I have never run by going through politicians. I go straight to the people,” he said.

The campaign said they are building a list of the different Jewish communities to better understand the varying pockets and groups that could help them get to the finish line.

Drawing a contrast with the former governor, Suozzi suggested he would take a different approach than Cuomo in handling the coronavirus pandemic and issues related to religious communities. He repeated a 2006 campaign slogan, “I can do it, because I’ve done it.”

A hands-off approach on yeshiva education

During the Democratic primary earlier this year, Adams said he was impressed by the yeshiva education system and promised to work with the Orthodox community to assure it aligns with state guidelines on secular education. Critics say many yeshivas fail to provide adequate secular education.

“There are 500 yeshivas in New York City and they were looking at 28 schools that had a problem regarding secular education,” Suozzi said about the Department of Education report in 2019 that investigated yeshivas who were not providing the amount of secular education that is “substantially equivalent” to that of public schools, as required by state law. “So we are going to condemn all yeshivas?”

According to the Avi Chai Foundation, which surveys American-Jewish education every five years, there were 290 Jewish schools in New York City, with an additional 147 in the suburbs in 2018. Yaffed, a pro-secular education group founded by former yeshiva students and parents, alleged in 2015 that at least 39 yeshivas were providing limited secular education.

Suozzi, who attended a Catholic high school, added, “I don’t think the state should be trying to control everything. We should be issuing guidelines. If they’re performing well, if the kids are graduating, they are getting good test scores, leave them alone. If they are not performing well, then you sit down with them and try to figure out how to solve the problem. I will have an open ear.”

Suozzi said he will enforce the executive order – signed in 2016 by Cuomo and renewed by Hochul in August – barring government business with any company that supports the Boycott, Divestment and Sanctions movement against Israel. “I will fight that like crazy,” he said.

He said he continues to take guidance from his Jewish colleagues in the House on issues related to Israel and will speak out against the delegitimization of Israel and antisemitism.

“Leadership is building relationships with people and getting their input,” he said about his overall approach. “If I issue any kind of executive orders or advocate for any laws, I won’t do it without communicating with my friends.”

If Suozzi pulls an upset in the June 28 primary, he will likely face the Republican candidate, a fellow Long Islander in the general election – Rep. Lee Zeldin, who is Jewish.

“It will be the mensch vs. the Jewish candidate,” his aide quipped.