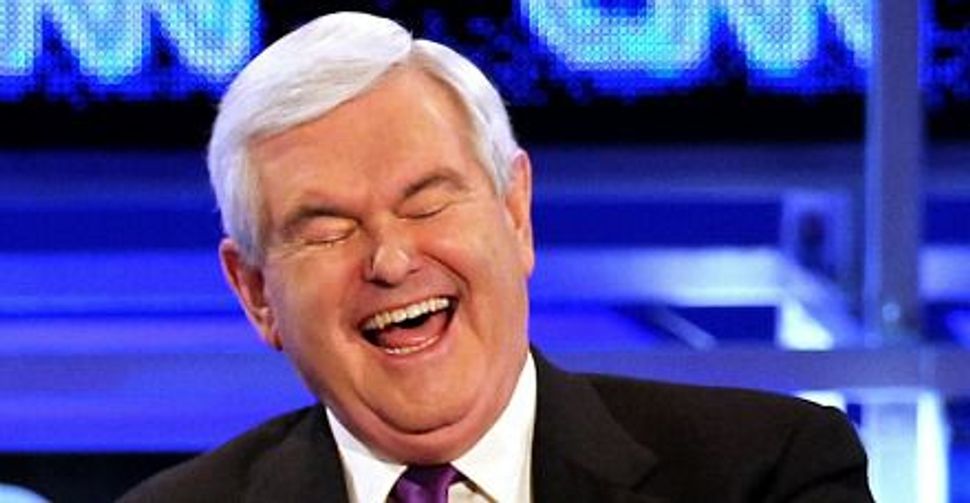 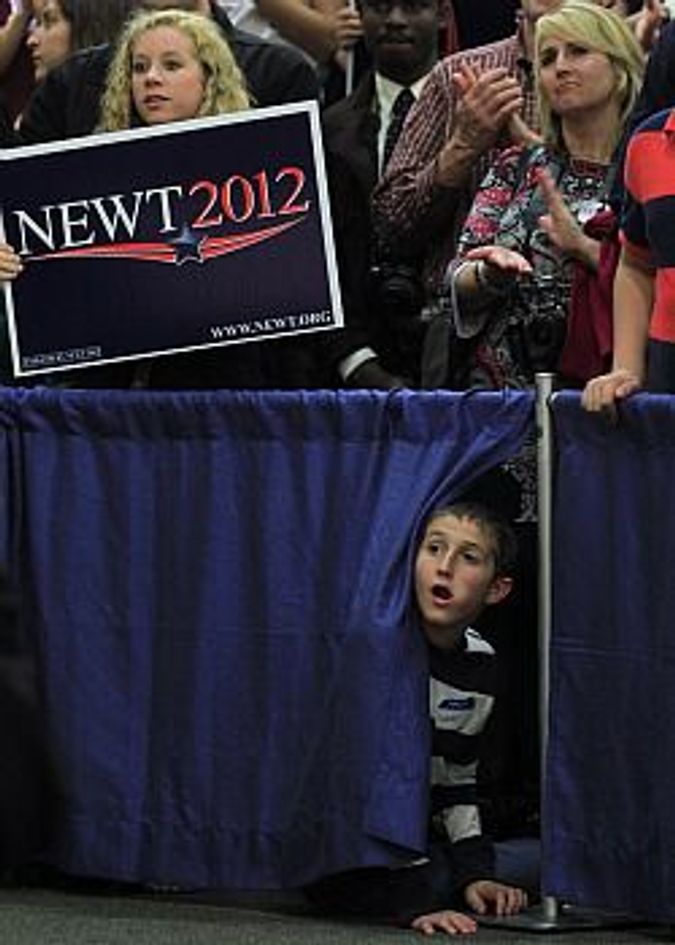 Fun, Fun, Fun: Newt Gingrich has spent much of his campaign warning against dire crises, real and imagined. So, given the chance to use a single word to describe himself, it was a bit surprising to hear him choose ?cheerful.? Image by getty images

The world is wobbling from crisis to crisis — think Iran, think Greece, think Syria, think a dozen and more other centers of misery, red meat for carnivorous columnists, but I am stuck. I cannot get beyond one word. It is the word that Newt Gingrich used the other night, in the last (for the time being) of the Republican candidate debates, when asked for one word to describe himself. Ron Paul had already used “consistent,” which, in any case, would surely have set the audience howling had Gingrich used it; Romney offered “resolute”; Santorum chose a noun rather than an adjective, “courage,” and then it was Gingrich’s turn.

I need to provide some context here. This is the same Newt Gingrich who earlier in the debate had cautioned that “everybody needs to understand — and by the way, we live in an age when we have to genuinely worry about nuclear weapons going off in our own cities. So everybody who serves in the fire department, in the police department, not just the first responders, but our National Guard, whoever is going to respond, all of us are more at risk today, men and women, boys and girls, than at any time in the history of this country. And we need to understand that’s the context in which we’re going to have to move forward in understanding the nature of modern combat. I think this is a very sober period, and I believe this is the most dangerous president on national security grounds in American history.”

I don’t want to pick nits, but I can’t quite get why all that is “by the way.” But let that pass. The statement was not out of keeping with other mortal threats of which the former speaker has advised us over the years: “I believe Shariah is a mortal threat to the survival of freedom in the United States and in the world as we know it.” Or, back in 1989, “These people are sick,” he said of congressional Democrats. “They are so consumed by their own power, by a Mussolini-like ego, that their willingness to run over normal human beings and to destroy honest institutions is unending.” He warned as well that unless the Democrats are stopped, “we may literally see our freedom decay and decline.”

Want more? In 1994, he summed up his personal propensity and his political philosophy: “People like me are what stand between us and Auschwitz. I see evil all around me every day.” A year later, it was the American Civil Liberties Union: “[I]t’s almost as though they were into destruction for its own sake and weakening and undermining America for its own sake.” The ACLU is “a consistently destructive organization that is opposed to and undermines the values of most Americans, and takes positions that are consistently weakening the security of the United States.” In 2010: “The secular-socialist machine represents as great a threat to America as Nazi Germany or the Soviet Union once did.” More recently: “Barack Obama is the most dangerous president in modern American history,” and the nation’s safety can’t be assured until he’s gone. “So, defeating Barack Obama becomes, in fact, a duty of national security. Because the fact is, he is incapable of defending the United States.”

Okay, you get the idea. So now tell me, how does this man tell us that the one word that best describes him is “cheerful”?

My dictionary defines cheerful as “noticeably happy and optimistic” and “causing happiness by its nature or appearance.” I believe that Gingrich may have confused “cheerful” with “loony.” And to think I’d imagined that his personality disorder-sized grandiosity was his principal failing, and that Ron Paul was the only genuine cartoon character (once Michele Bachmann and Herman Cain dropped out, and Rick Perry, too) up there.

And Romney? Not satisfied with having said it once, he has now told us again that the trees in Michigan are the right height. Does he mean that the trees of other states are the wrong height? Tell the good citizens of California that their giant sequoias are ungainly, some of them about as tall as a 25-story building.

Santorum, the candidate of misplaced nostalgia, longing for times that never were? The word “courage” is not the first word that comes to mind upon hearing his ideas. The first word was, until recently, “wrong-headed.” By now, it is merely “tiresome.”