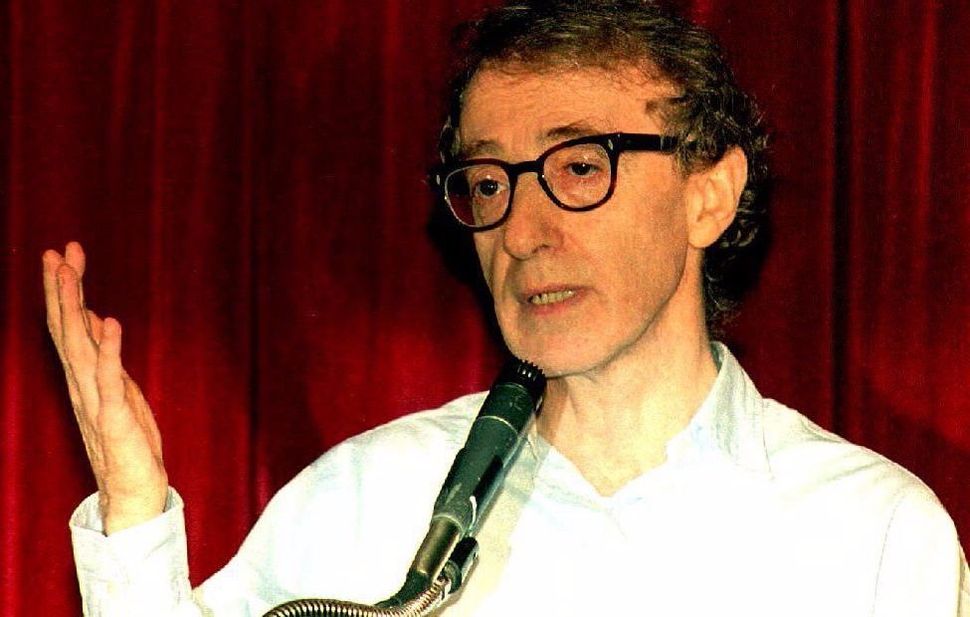 Dylan Farrow says she was sexually abused by Woody Allen at age seven.

I believe her. Why wouldn’t I?

Actually, there’s an easy answer to that. By and large, most men do not believe most women who accuse men of sexual abuse. If that has changed (and I don’t think it has), it has only changed very, very recently. And so if I didn’t believe Dylan Farrow, I wouldn’t be engaging some odd deviation from the usual practice, crying out for explanation. I’d be behaving like most American men, most of the time, in response to most contentions of sexual abuse.

Eli Bromberg, however, offers a different, albeit “partial”, explanation for why Allen hasn’t fallen from grace. In these pages, he asks (channeling Farrow), why are those “who have condemned [Harvey] Weinstein [shying] away from passing judgment on Allen”? Bromberg’s answer is straightforward: It’s because Allen is a Jew being accused by a non-Jew. And as a result, everyone is cowed by the specter of “anti-Semitism”.

There are a couple of things which seem odd about this explanation. The first is that Harvey Weinstein, too, is a Jew whose accusers are predominantly non-Jewish. So as a means of distinguishing Allen’s treatment from Weinstein’s, the “Jewish predator/non-Jewish accuser” argument doesn’t seem to work.

The second oddity is that it acts as if there is something aberrant in the failure of Hollywood to sanction Woody Allen. It is true that Allen has not been rendered a persona non grata in Hollywood. In this, he is different from Harvey Weinstein and Bill Cosby. But he is not alone. In not yet being ostracized, Allen joins the ranks of Johnny Depp or Ben Affleck. It seems to me that the former category is the exception calling for explanation. That men generally don’t face consequence or sanction for sexual abuse is the norm, not the exception.

Put another way, the reason Woody Allen is still shielded by Hollywood is because most of the time, most powerful men are shielded from consequence when faced with allegations of sexual abuse. It’s the misogyny, stupid. Why does Allen’s case demand more explanation than that?

But Bromberg isn’t satisfied with this explanation: The fact that Allen has intimated that anti-Semitism accounts for the allegations has a chilling effect not merely on Jews passing judgment on Allen, but on non-Jews as well. It puts every observer in a difficult position: if we believe Dylan, are we participating in the demonization of a Jewish icon? If there’s even a chance that Allen has been the victim of an anti-Semitic conspiracy, non-Jews opposing bigotry would certainly not want to sign on to a “witch hunt.”

Bromberg gives us too much credit. Again, why doesn’t the conventional explanation (misogyny) suffice here? Why isn’t the above entirely epiphenomenal? Bromberg appears to believe that if a conversation that includes Jews isn’t proceeding in the right way, the first, best, and only explanation is that the Jews are obstructing it.

The problem is that there’s virtually no evidence that Allen’s Jewishness, or concerns about anti-Semitism, are playing any causal role in why Farrow’s accusations are not being taken seriously.

Even if we didn’t have a perfectly adequate explanation already in hand (misogyny), Bromberg’s case that Allen has even tried to “play the anti-Semitism card” is remarkably thin. He gives a grand total of two examples, both from over twenty years ago, both of which are (at best) vague and opaque allusions (the first example, by contrast, is a straightforward and direct appeal to misogynist notions of the hysterical woman). I’m highly doubtful that any non-Jews — or even most Jews, frankly — would read them as primarily dog-whistles towards anti-Semitism. If one is going to successfully play the antisemitism card, one almost certainly has to lay it down more forcefully (and more recently) than Allen supposedly did.

But even if you disagree, there’s still a much larger problem here: The unexamined assumption that “crying antisemitism” actually influences non-Jewish behavior in a meaningful way.

There is perhaps no greater gap between perception and reality than in the unshakable confidence many have in the talismanic capacity of “-ism” claims to protect members of vulnerable minorities from criticism or punishment. This disjuncture is true of racism, and it’s true of anti-Semitism, and the perception endures no matter how blatantly it is falsified in practice.

Bromberg isn’t wrong that the real risk of antisemitism may well cause Jews to hesitate to endorse non-Jewish claims of Jewish misconduct — even when those claims may well be warranted (as Farrow’s appear to be). But I am exceptionally dubious that this reticence extends to non-Jews in any non-marginal case. I think, to be sure, that non-Jews care quite a bit about portraying themselves as laboring under an oppressive cloud of Jewish scrutiny, whereby a single false move leads to banishment or worse, and where consequently attacking Jews or Jewish institutions is a brave act of rebellion rather than what it actually is — the historical norm. But it is this logic which allows us to think, with a straight face, that the primary function of accusations of anti-Semitism today is to shield Jewish sexual predators from consequence — that Jews accused of sexual abuse are lucky to be Jewish (if they were Gentile, God help them!). Bromberg is appealing to a long line of discourse which treats anti-Semitism primarily as a perk Jews enjoy, rather than a genuine and material oppression we continue to endure.

Why do so many people believe this? Why, other than anti-Semitic notions of Jewish hyperpower, do we assume that people are only silent about a male Jewish sexual predator because they are waiting for the Jews to give them their cue? Isn’t the better explanation — again — that they are silent because they are usually silent, because that’s society’s standard order of operation when powerful men are accused of sexual abuse? Isn’t it at least presumptively reasonable to think that it’s the “male”, not the “Jewish”, that’s doing the work here?

The reason Bill Cosby was still accepted in Hollywood for so long isn’t because he’s Black, it’s because people usually believe men over women.

So too Harvey Weinstein, so too Dustin Hoffman, so too a long string of Hollywood abusers — some who have been exiled, most of whom continue to work normal careers. The insulation they enjoyed, and often continue to enjoy, is because people usually believe men over women.

It’s because of misogyny — full stop.

David Schraub is a Lecturer in Law at the University of California, Berkeley. He blogs at The Debate Link, and can be followed on Twitter @schraubd.