A Bernie Sanders Presidency Would Strike A Blow Against Anti-Semitism 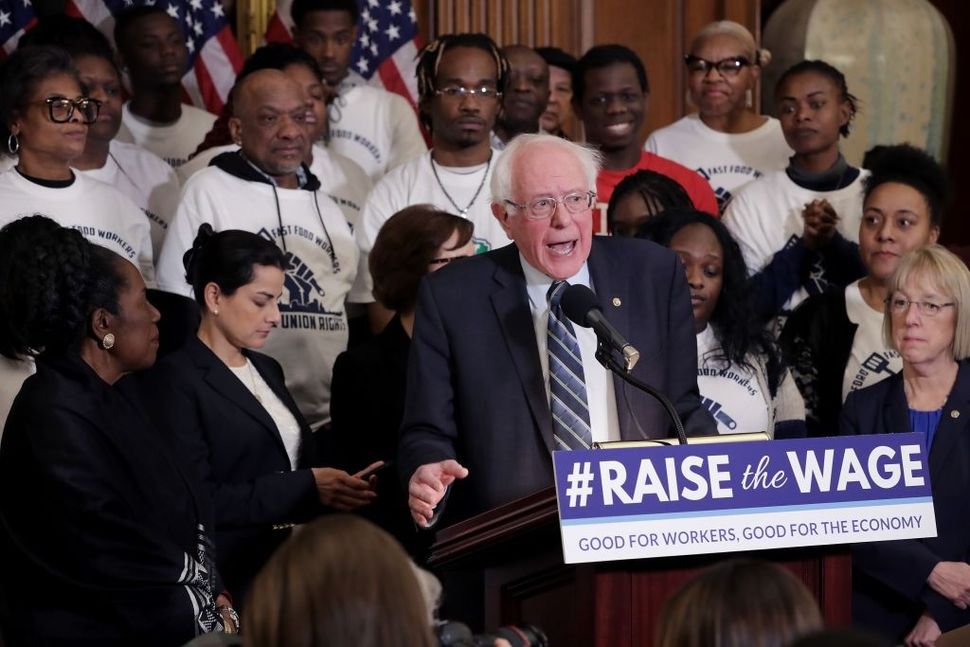 Senator Bernie Sanders, a frontrunner in the race for the 2020 Democratic presidential domination, stands as an central figure on the American left.

Despite being elected as an Independent, his influence on the Democratic Party since his 2016 presidential run has been transformative. Even Democratic “centrists” in the 2020 field — such as Kamala Harris and Cory Booker — have embraced progressive ideas pioneered by the firebrand socialist, with policies such as Medicare for All and a Green New Deal entering the party mainstream.

If inaugurated as president in 2021, Sanders would also beat Donald Trump’s record as the oldest US president taking office. According to his detractors, Sanders is standing in the way of a new generation who could stand for broadly the same ideas, while also representing an increasingly diverse America. But is it fair to dismiss Sanders — a prominent Jewish American — as yet another white man seeking power?

Of course, we cannot ignore the intersection of Jewishness and whiteness, obvious when Jews of color face intercommunal discrimination. Sanders has identified as white in mind of understanding the white working class voters who defected to Trump’s GOP in 2016.

But a Sanders win would strike a significant, symbolic blow to rising anti-Semitism in the U.S. and across the board.

We only need to look at recent history to realize the significance of electing a Jewish American president. Recall how presidential candidate Barack Obama was subject to racist conspiracy theories demonizing him as a Muslim, an atheist or even a person fraudulently claiming to be a US citizen. This deception was designed to incite and exploit xenophobia, painting Obama as an malevolently alien figure.

Clearly, how America would respond to Sanders — the first serious presidential nominee standing openly outside of Christianity — is anything but trivial.

Sanders may not be highly observant, but he fiercely denies being an atheist. A self-described spirituality, informed by his Judaism, drives his moral outrage at inequality and much-needed focus on environmentalism.

His world-view has been shaped by a consciousness of persecution and injustice, having grown up in an impoverished working class family in Brooklyn, an infant when European relatives perished in the Holocaust.

Like Obama, Sanders cut his political teeth as a student protester,engaging in civil disobedience as part of the black civil rights movement. In doing so he joined many other Jewish American activists, some of whom fell victim to white supremacist terror.

Over decades in American society, anti-Semitism has intertwined with other forms of racism. At the height of its influence, the Ku Klux Klan lobbied against Jewish immigration, their resentment driven by the prominence of Jewish people in the socialist and labor movements from the turn of the century.

By the 1930s and 40s, anti-Semitic attitudes were widespread, leading to the shunning of Jewish refugees and facilitating thousands of murders under the Nazis.

Today, anti-Semitism and neo-Nazism thrive on the alt right movement. An obsession of the alt right is the “cultural Marxism” conspiracy theory that paints Jews as the puppeteers of a global plot to destroy “western civilization.” In other words, Jews are blamed for for all aspects of modernity and liberal democracy, from feminism, to LGBT rights, to religious and racial equality.

The extreme right-wing has traditionally manipulated populist rhetoric about the greed and corruption of elites as a vessel for anti-Semitism. This also manifests on the fringes of the left, which now more often manipulates the Palestinian cause.

The presence of Sanders, both unashamedly Jewish and socialist, would confront the new fascism head-on.

Whichever candidate’s camp progressives join in 2020, they should not only bear in mind that Sanders — with his popular policies and huge grassroots network — is arguably the strongest contender to take back the White House.

In an America that now witnesses an insurgence of anti-Semitism from cemetery desecrations, to the neo-Nazi terrorizing of Charlottesville to a synagogue massacre in Pittsburgh, a Sanders presidency would be far from merely electing another white man.

A Sanders victory, just like Obama’s, would stand as a profound repudiation. It would not rid society of prejudice, but it would strike a symbolic blow against the poison of anti-Semitism and all of the other hatreds bound to it.

A Bernie Sanders Presidency Would Strike A Blow Against Anti-Semitism