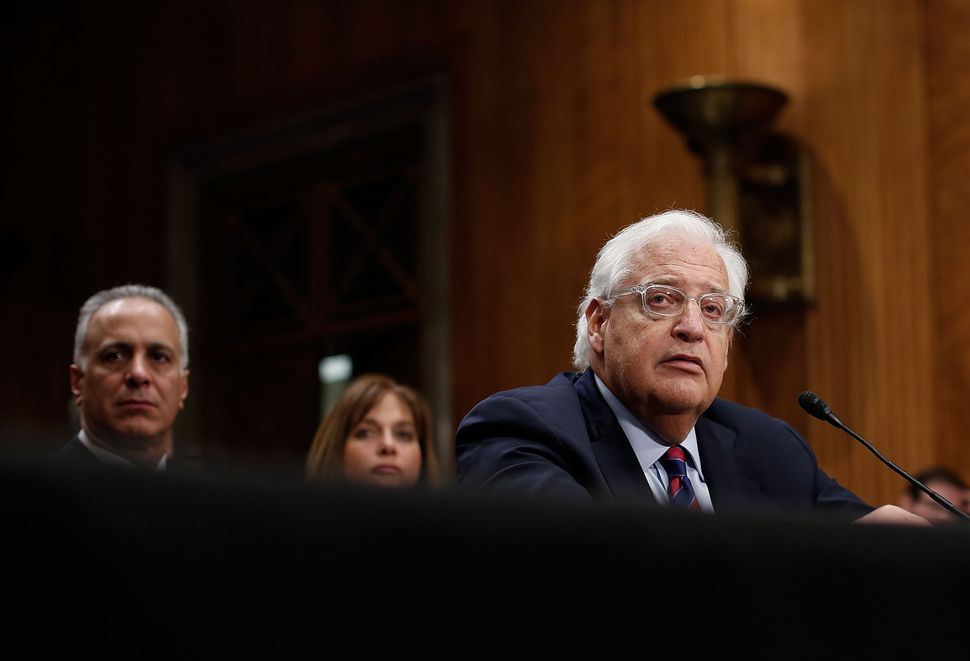 Last week, an Israeli armed with nothing but an avocado robbed two banks in the southern city of Beer Sheva. He told the terrified tellers he was holding a hand grenade. And although the average Israeli eats more avocados than anyone elsewhere in the world besides Mexico, Chile, and Peru, the tellers failed to realize that they were being held up by a piece of fruit.

In a couple of weeks, politicians and business people will gather in Manama, Bahrain for an economic “workshop” to raise money for the Trump administration’s Israeli-Palestinian “peace plan” — the so-called “Ultimate Deal” or “Deal of the Century” — which is still under wraps.

Why all the quotation marks? Because Team Trump, the three people the President has appointed to lead this effort, knows that what they have in their hand is an avocado: inedible and hard today, putrid tomorrow.

Unlike the poor tellers at the Beer Sheva banks, though, the Manama money men know full well they’re dealing with rotten fruit. Nobody believes that the deal concocted by Jared Kushner, Jason Greenblatt, and David Friedman has any chance of bringing about peace for Israelis and Palestinians. Even Secretary of State Mike Pompeo, in private comments to a recent gathering of American Jewish leaders, indicated that the administration had no illusions about the implementability of its plan.

But what people may not realize is that the trio, particularly its leader, Trump’s ambassador to Israel David Friedman, has no interest in a Israeli-Palestinian peace as most people perceive it.

For all practical purposes, Friedman sets the Trump administration’s policy on the Israeli-Palestinian issue and on US-Palestinian relations. Friedman has strong views about these topics, views which are religiously and nationalistically driven. He states them publicly, and he pursues them.

If you follow Friedman’s words and deeds since he was nominated to represent the United States in Israel, you would know that he abhors the two-state solution, loathes the Palestinian leadership, thinks that American Jews who support the two-state solution are traitors (“worse than kapos,” in his words), and strongly believes in expanding Jewish settlements in the West Bank.

Prior to becoming ambassador, Friedman referred to the two-state solution as a “scam,” a “damaging anachronism,” and “an illusory solution in search of a non-existent problem.” He wrote that the two-state “narrative needs to end because it is preventing the opportunity for real progress that has the potential to improve the lives of Palestinian Arabs and Israelis alike.”

True to his word, Friedman is doing anything he can to attain this stated goal. He has come up with a “peace deal” and talks about improving the lives of Palestinians, but his plan does not fulfill their national aspirations for statehood.

Friedman obviously knew that Palestinians would call the bluff of such a plan and reject it, and that the plan would subsequently fail. He’s hoping that Palestinians would be blamed for the failure. Right-wing Israeli politicians would then intensify their pressure to annex parts of the West Bank and the Trump administration would have an excuse — Palestinian rejectionism — to recognize the annexation.

You see, Friedman’s objective is not to come up with a fresh, new, outside-the-box approach to peacemaking. His goal is to smash the box, to liberate Israel from the confines of an international consensus and an official US policy that supports the creation of a Palestinian state.

Every now and then, in a media interview or a speech, Friedman says what he believes. Thus, this week, he told The New York Times that Israel has the right to annex parts of the West Bank.

A spokesperson for the State Department stepped in a couple of times to insist that Friedman’s words or actions “do not indicate a shift in US policy.” But the fact is that Friedman is changing US policy. His actions are aimed at creating facts on the ground that are difficult to reverse, just like the settlement enterprise that he so zealously supports.

But this is the point. Friedman has an agenda. He does not hide it. He acts upon it. And his agenda contradicts the national security interests of the United States, as well as its official policy.

Unlike the Israeli robber, Friedman’s avocado is a hand grenade. He has the power to continue shattering the two-state solution, and he has shown that he does not hesitate to use it.

Friedman should be fired. Anyone who cares about the two-state solution, about Israel’s future as a democracy and a Jewish state, about the Palestinians, and about the security and stability of the Middle East, must join the call for Friedman to go.

Ori Nir is the spokesman for Americans for Peace Now. Prior to his work at APN, Ori worked for Haaretz Daily, where he covered Palestinian affairs and Israel’s Arab minority. He also served as Haaretz’s Washington bureau chief and later as its US West Coast correspondent. Mr. Nir was also the Washington Bureau Chief for the Forward.