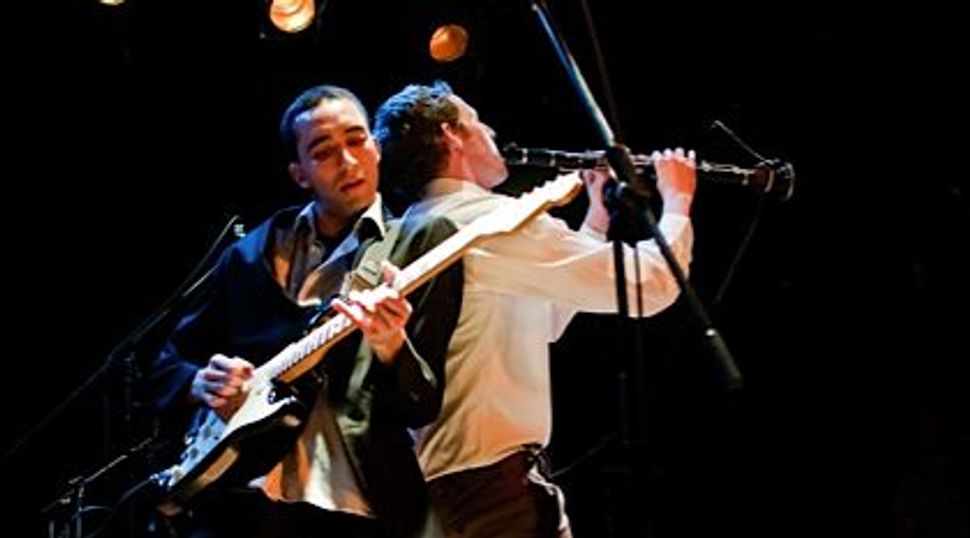 Thirty seconds into the music bodies are moving on the dance floor, my pulse is synched to the beat, and electric guitar and drums are crashing through my bloodstream. Then the wail of the clarinet takes over my brain and I’m singing along with the band — in Yiddish. Ramzailech sounds like no other group, merging klezmer, industrial, hip-hop, jazz, and Middle Eastern music into a rush of sound and feeling, the past slam dancing into the future. Multicultural mania this intense can only be made in Israel.

Ramzailech is Gal Klein on clarinet, Amit Peled on guitar and Dekel Dvir on drums. The three friends have been playing music together since 2005, and have now been joined by Michael Guy on bass and Hod Moshonov on keytar. Ramzailech have already recorded their first album and are just on the brink of their first European tour with a performance at the International Klezmer Festival in Fürth.

After hearing the band in November at the International Exposure for Jazz and World Music festival in Jerusalem, I was curious to learn how three young guys from Kfar Saba came to sing in Yiddish, and caught up with them as they rehearsed for their next gig. Clarinetist Gal Klein was still in transit, and I began the conversation with Peled and Dvir.

Amit Peled: In the beginning we played traditional nigunim and klezmer.

Dekel Dvir: Not even the second.

Peled: Our combined musical identity contains these elements, because Gal plays clarinet, and beyond his studies in jazz and classical music, it’s almost cultural and rooted in his playing.

Dvir: Not just in his music — Gal comes from a home that is rooted in the culture of Eastern European Jewry.

Dvir: With Gal it’s first in the spirit, and only then in the music. He shared that with us, he brought us into his world and the input that we brought is what became Ramzailech.

Peled: We came from very different musical directions — lots of rock and jazz, which is also what we studied. Where I grew up, just like Gal grew up on Yiddish, I grew up on Umm Kulthum and Farid al-Atrash and Abdel Wahab. From an early age I remember the cassettes on which my grandfather would record, scrawl a few words in Arabic on cellotape and give them to my mother. As a kid I hated it by the way, I really hated it, but as you get older and mature, it caught my ear and I began to play the oud. There are many sequences with oud in the background on our album. We do music from all over the world but it’s very Israeli music, this melting pot.

The openness and spontaneity of Ramzailech in concert reflect their strong sense of identity and their pleasure in the diversity of their cultural environment. Asked about his musical background, Dvir described himself as “the kitsch person in the band” with a love of Romantic and early 20th-century post-Romantic composers such as Tchaikovsky, Wagner, Mahler and Shostakovich.

Dvir: On the other hand, I’m a drummer so I’m kind of a groove machine in the band. So I think that’s what I bring — groove and some kind of feeling that comes from things unrelated to drums.

Peled: I think that when we were both in high school (not that we’ve matured at all since then) we heard a lot of heavy rock… a lot. So I think that even in the aesthetics of the performance we look at groups that used to influence us — Ministry, Nine Inch Nails — we use samples. We create the beats ourselves. If you hear something, then it’s us hitting something metal and recording it. We practically live in the studio. When we began doing the beats, then if we wanted a bell we recorded Dekel’s microwave.

Lately we’ve noticed that we are recording and documenting everything — all the sketches for songs, everything, even our private jokes — sending each other recordings from five years ago when we’re screaming at each other. We sample everything and we don’t throw anything away.

Dvir: We’ll want this recording after the conversation.

You describe the band as “hardcore klezmer.” What does that mean to you?

Peled: Klezmer — it’s what we continue in terms of what we do with our music. It’s a style that has a great tradition, it’s very important culturally. This is something that Gal began and we continue as a band — it’s connected to identity, Jewish identity and identity in general. We are not making something traditional although we love the tradition very much. We take this tradition but we are taking it somewhere else.

Hardcore represents two things. One is traditional; it’s a kind of a nod to klezmer as if to say hardcore klezmer is the purest form of klezmer. But hardcore for us relates much more to the approach of punk and rock ‘n’ roll and to be very… hardcore. Our performances are hardcore. It’s not just a concert, it’s also a party. It’s more than dancing, it’s cutting loose, going wild, celebrating.

In the midst of the conversation, Gal Klein arrived and after some moments announced quietly from a corner of the couch: “I have a new song.”

Can I hear it?

Tell me something about the writing process, where do the songs come from?

Klein: I know how to take the words to the place and background I come from and I know that in the work process that’s something that took root with my friends. For example the last song we worked on, “Ribono Shel Olam,” if until then the process was to receive some inspiration from a Yiddish or Jewish image, an Eastern European image, I got this image when Dekel and I were working together and trying to look for a new song or nigun. 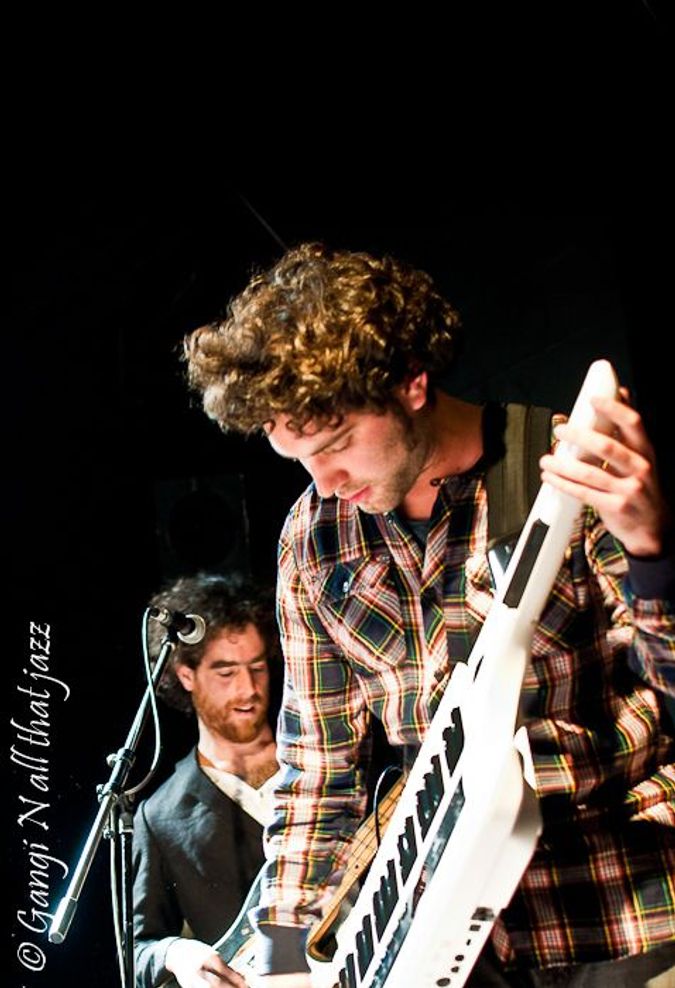 Dvir: Suddenly a nigun came up, and then it inspired us to choose certain words.

Klein: Mamash, we wrote a song in five minutes. We wrote four verses and a chorus. You need to lead yourself to the feeling, the image before your eyes, the atmosphere.

Klein: Images, I like to describe them as pictures, images from a way of life that I do not even know if it existed in the way that I imagine it, but I can only imagine to myself that that’s how it would have been, had I been there. But often in the songs we meet the combinations that exist in the place we come from, songs like “Amzaleg” or even “Ribono Shel Olam” have all the Israeli influences I know…

Peled: That’s what we were talking about, just before you came in.

Klein: Starting with Zohar Argov, you probably said that too.

I’m still stuck on my initial shock when Dekel first told me, “And we sing in Yiddish.” When you began to play together did you know that this is what it was going to be? Yiddish klezmer?

Klein: It went in that direction naturally.

Peled: We began as an instrumental group and we had songs like “Le Ma’an Achai Ve’Rei.”

Klein: We started with covers, Hassidic American — Carlebach, just as a beginning, but very quickly went our own way. I think that it started in our first performances when we had a piece called “Onia” (“Ship”) and in the middle we started singing vay di di di di — a kind of Jewish wail.

Peled: Yiddish suffering… the fact that we are so different gives us the freedom to do whatever we want because either way, people will be in shock. We’re singing in four languages now: Hebrew, Yiddish, English and Arabic… and a sentence in Russian. I shout a song in English, “Amzaleg” has some Arabic.

Klein: It’s important to us because we are on the threshold, about to appear onstage before people who are not necessarily Jewish or Israeli. It’s important to me that we come with baggage that is so multicultural and positive. Even if I only give one sentence in Russian and one sentence in Arabic in performance and most is in Yiddish, I want to convey a message about the collaboration that we have in this country. It’s fun for me to sit with friends and know that we can laugh at each other’s ethnic origins. I don’t know if that’s an appropriate thing to say in an interview but that’s what is important for me to show. I hope that the picture, which is after all an Israeli picture, will be positive and beautiful.

An Israeli portrait — but Yiddish was not so popular here.

Klein: No, it was forbidden. Ben Gurion forbade speaking Yiddish. Great Yiddish artists like the comedy duo Dzigan and Schumacher immigrated to Argentina because their art and lives were based on Yiddish culture, a secular culture rooted in the Yiddish language, and it was forbidden in Israel… and it was hard, it was also right after the war.

Peled: In conflict with the image of the Sabra…

Peled: A first generation for something new.

Klein: A kind of freedom, artistic freedom to create in Israel. Because there isn’t really something familial that we commemorate or cultural music that we play one to one, as it was written. There is something that we take, cultural material, and we create with it, in it.

There has been a resurgence of interest in klezmer music and Jewish traditions in general.

Ramzailech are currently working together very intensely as guitarist Amit Peled will soon return to New York, where he is studying Jazz Performance at The New School. Contending with the difficulties of a long-distance relationship doesn’t faze this band. In the past they continued working together when Dvir was in Los Angeles studying music.

Peled: Just understand what we’ve been through together — from friends in high school playing in Dekel’s basement, working with Dekel underground for long periods of time, then we were all in the army… we are like a married couple of three 24-year-old men in a six year marriage. It’s also in our music, this crazy spectrum of colors. We’ve been through every situation you can imagine, and some you can’t imagine. Driving for hours to gigs, sitting with a bass drum or a loudspeaker in your lap all the way to Safed.

Dvir: What amazes me is that we’ve just begun and we haven’t seen anything yet. This is just the beginning.