‘The Marvelous Mrs Maisel’ Lives Up To Its Name 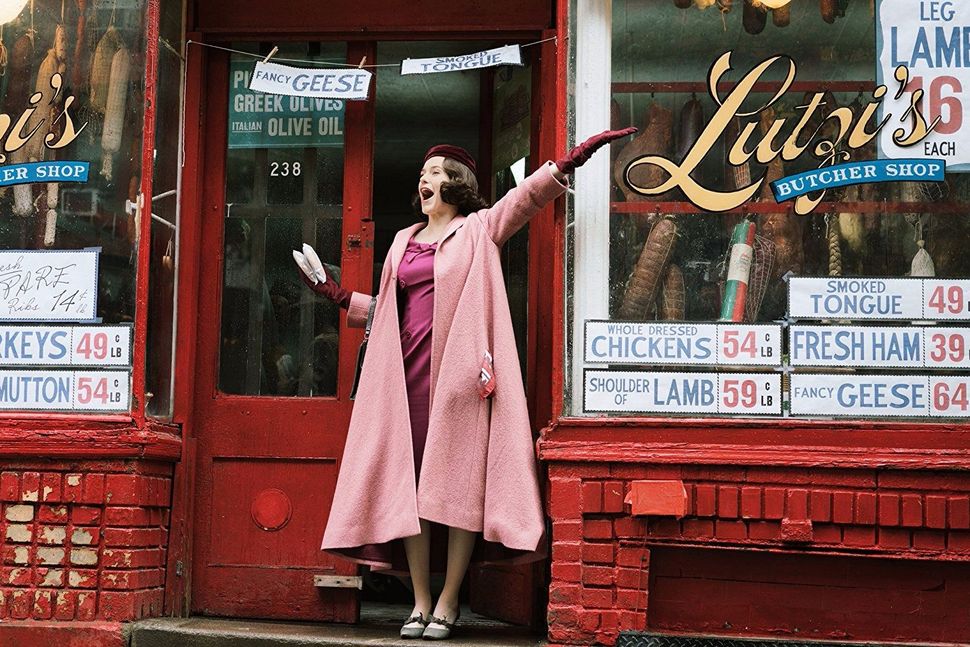 For fans of “Gilmore Girls,” certain aspects of Amy Sherman Palladino’s newest venture “The Marvelous Mrs. Maisel” will seem familiar. There’s the whip-smart, snappy dialogue of “Gilmore Girls,” now moved to 1950s New York where it is even more at home. There’s the blunt yet vulnerable brunette heroine at the center of the action, shifting from Lorelai to Rachel Brosnahan as Midge Maisel. And there’s the comfortable, detailed, homey sets that draw viewers in, this time moved from small town rural life to lush, historically accurate sets designed to delight history buffs.

In short, all the things that were tangentially Jewish about “Gilmore Girls” have been transferred to “The Marvelous Mrs. Maisel” and turned up to one hundred.

When Midge Maisel gets up to give a speech at her own wedding in the opening of the pilot, it is apparent that she is Jewish, not just incidentally Jewish, but a very particular kind of liberal, overeducated, obliviously prone to oversharing, privileged, quick talking New York Jew. “Though I knew that love would be great I had no idea it could be anything that could justify what I paid for this dress,” she announces.

“What I paid for that dress,” mutters her father, played by Tony Shalhoub. “We’re very happy.” Past all the humble-bragging, the obvious question arises: Are they?

The pilot has a rushed, whimsical air to it. The tough but tender Mrs. Maisel’s life seems designed to strike envy in the hearts of those that watch it. The charming, brisket-making Midge is not above lying to get what she wants. When what she wants seems, for the first time in her life, inaccessible, as her husband reveals to her that he is having an affair with his spacey secretary (“You’re leaving me to be with a girl who doesn’t know how to sharpen a pencil?”), Midge takes to the comedy stage to deliver an unhinged rant about the failures of domesticity.

The show explores the lure of comedy to people who don’t need it, or even more radically posits that everyone, even the financially blessed among us, needs comedy, that it is sewn into the thread of our lives, and that while needing an audience is an innate trait, being deserving of one is another can of worms entirely.

What emotional space does comedy feel? Who gets to fill it? There’s fertile emotional ground here, with a setting of privileged Jewish American princess finding her way as a comic, frequenting underground comedy clubs in NYC at a time when American comedy was arguably reaching a peak.

Some minor quibbles arise in the wake of such a light confection of an episode. In such a determinedly Jewish show, why has Palladino hired such a minimal amount of actually Jewish actors? Why would Midge be buying lamb for the rabbi in a store that sells pork chops? Surely there’s a kosher butcher Midge could buy from.

Yet in a time when genre-defining comedian C.K. Louis has been toppled from his throne, it’s nice to have a hilarious housewife hogging the stage.

“A dream is what keeps you going and a job is what you hate,” Midge’s husband tells her. For Midge Maisel, maybe it could be both. After all, if you can make it in New York, you can make it anywhere.

“Do you love standup comedy?” Midge demands of Lenny Bruce, played by Luke Kirby. “It shouldn’t exist,” he tells her. “Like cancer and god.”

Then he shrugs extravagantly, with a buoyant smile on his face.

“Yeah, he loves it,” says Midge to herself. And so will she.

The first season of “The Marvelous Mrs. Maisel” is available on Amazon Prime Video.

‘The Marvelous Mrs Maisel’ Lives Up To Its Name