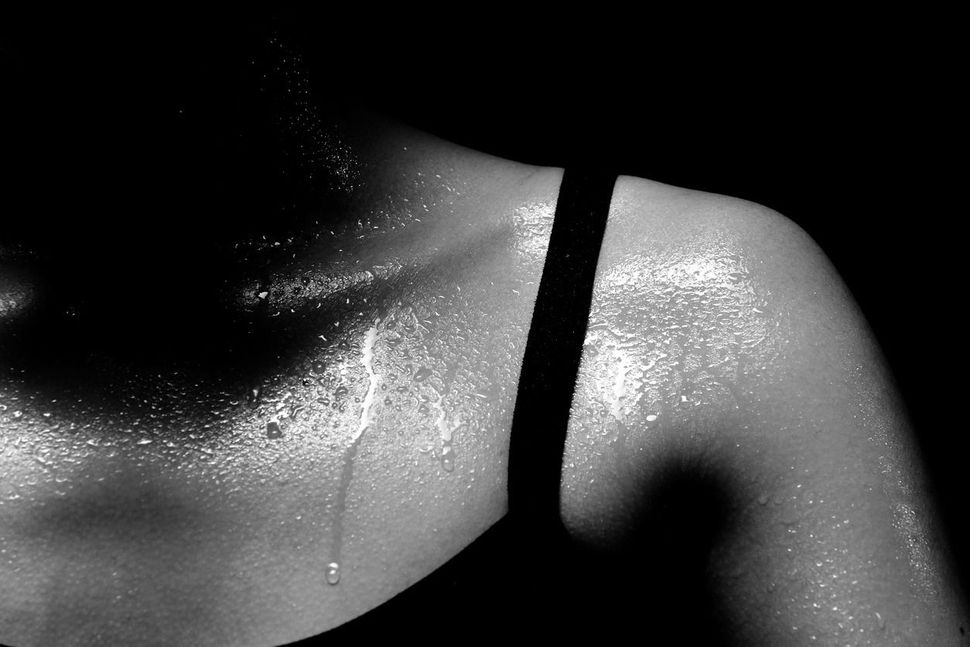 It’s the last week in August and in New York City, it’s a sweltering 90 degrees, with temperatures rising every hour.

And yet, one glance at my outfit today and you’d think it was late autumn or early spring: Long sleeves that kiss the wrist; skirt so long I need to gather it up as I trudge up stairs lest I trip over the hem; neckline encasing my neck tighter than any choker.

I know, I know — sounds oppressive, right? While everyone in Manhattan is wearing minimal amounts of clothing to “beat the heat,” I’m walking around like the polygamist wife of a FLDS Church cultist.

But, oddly enough, I don’t feel particularly oppressed by the heat (or by my Orthodox Judaism, for that matter). I’m not going to pretend I’m not sweating buckets like the rest of the massed horde at the 34th street subway platform while waiting for the 2 train downtown. I am. I’m drenched. It’s not pretty.

And yet, I feel that my seemingly oppressive layers — the miles of fabric covering my body that cause fellow commuters to look upon me with a mixture of confusion and pity — actually help take the edge off the temperature.

Vanessa Friedman, the fashion critic at The New York Times, wrote in a recent Friday newsletter about this seemingly paradoxical notion of covering up to cool down in the sweltering heat:

“The obvious fallback is always less: shorts, tank tops, summer slips with spaghetti straps,” wrote Friedman. “But the older I have grown, the more I realize that those in traditionally hot countries like Morocco and India have it right. The solution is not incredibly shrinking clothes but longer dresses in lighter fabrics. The two coolest pieces I own are ankle-length Altuzarra dresses, both in silk, that sort of float around the body without clinging and seem to act as my own personal shade system. I know this doesn’t really help men, but for them a tunic in a soft and thin cotton might work well. The point is: More coverage does not always equal more sweat. It may seem illogical, but it’s true.”

Still in that Paris mood… Shop the #AltuzarraFW17 now at @Saks.

As someone who has spent all my life covering up during the hottest, muggiest parts of the summer, Friedman’s words ring true: Billowing skirts from a gust of air from a subway grate can act as a fan for sweat-drenched legs; that strange cooling sensation that comes from being lightly touched, of arm hair being gently caressed by a crisp cotton top that skims the body; that strange relief from feeling fabric absorbing the sweat that runs down your body. A loose, long skirt will keep you cooler than a pair of tight mini shorts.

Clothes, in that sense, are a “shade” to the oppressive heat, as Friedman notes. Baring one’s skin leaves it exposed to the elements. Sweat pours, unbidden, from the body, in a desperate attempt to regulate the omnipresent swelter. In my case, the sweat is still pouring, but it gets absorbed by the wicking power of breathable cotton.

Even science agrees. According to a study titled, “Skin Temperature: Its Role In Thermoregulation” by A.A. Romanovsky: “When we step outdoors on a freezing day and have any portion of the skin exposed (usually the face and the hands), the exposed areas soon become cold, even though any skin protected by clothes remains warm.” I’m no scientist, but perhaps we can deduce, then, that the opposite is true: Covered skin remains constant, while the temperature of the exposed skin rises in conjunction with the outdoor heat.

I rest my case: The key is to wear light, breathable fabrics like cotton, which are best suited to help regulate the body’s internal temperature.