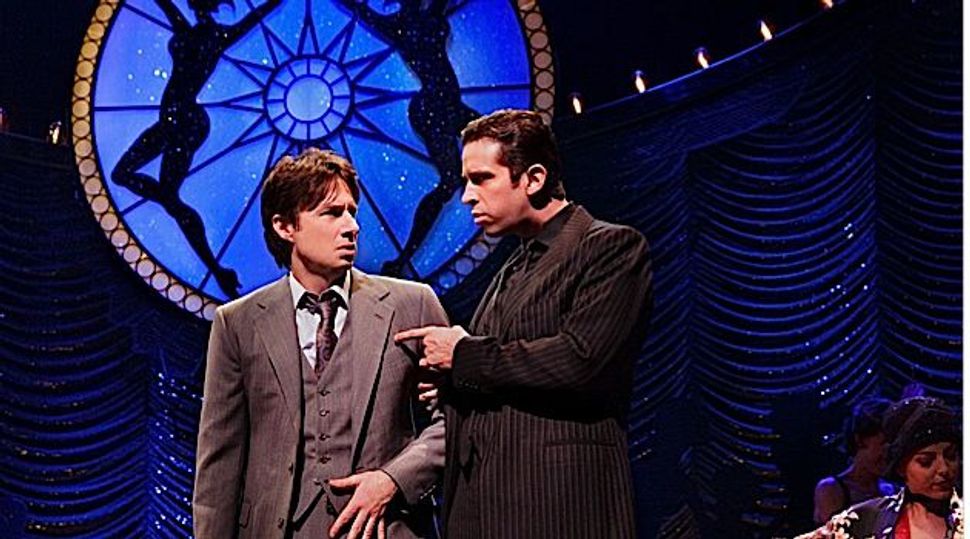 The plot of “Bullets over Broadway,” the new musical by Woody Allen (with essential help from director Susan Stroman and music “adaptor” and lyrics tweaker Glen Kelly), is built around an elaborate setup. David Shayne, a Greenwich Village artiste in the vein of Eugene O’Neill, discovers to his astonishment that one of his experimental, symbol-laden plays has been selected to be produced on Broadway. But the show is being funded by a mobster, Nick Valenti, to placate his vapid moll Olive, whom David is required to cast despite her total lack of acting talent. Along with Olive comes her minder, Cheech, a brutal goon who’s tasked with protecting her chastity.

What follows has all the narrative simplicity of a classic George S. Kaufman and Moss Hart play (or Hart’s autobiography, “Act One” — soon to be a Broadway spectacle of its own!) As David inevitably finds himself unable to fix the apparently inexhaustible problems with his script, Cheech steps in and rewrites it from scratch, turning it into a Broadway hit. It’s a classic ironic reversal: The thug is an artistic genius, the pretentious bohemian a talentless fraud.

The producers of this show are, I’m sure, hoping for the same critical and commercial success that the play within the play achieves. But what are the terms of “success” in this context? And do they have anything, really, to do with art?

With cynical precision, “Bullets over Broadway” models the form that the contemporary Broadway musical is expected to take. As I watched the show, I kept a list of the ways that it panders to its prospective audience of tourists and high school drama clubs, and it contains everything they may possibly desire:

A pre-existing, pre-tested, “beloved” entertainment platform (or as they might have it, story) on which to hang the singing and dancing and theatrical shenanigans: In this case, it’s Allen’s 1994 backstage farce of the same name about art, commerce and the mob. It was nominated for seven Academy Awards, including original screenplay (for Allen and his co-writer Douglas McGrath, who curiously goes without mention — given how closely the musical follows the screenplay, shouldn’t he be getting a credit here?), best supporting actor (for Chazz Palminteri) and actress (for Jennifer Tilly), and best actress (for Diane Wiest, who won).

A jukebox musical score made up of songs the audience already knows: “Bullets” may not have “Dancing Queen” or “Waiting for a Girl Like You,” but it does feature “Let’s Misbehave,” and “Yes, We Have No Bananas.”

Stars of stage and screen: The big draw is Allen himself, obviously, but the show also boasts Zach Braff of “Scrubs” as David Shayne.

Stunt casting: The role of Nick Valenti is played by Vincent Pastore — “Big Pussy” himself!

Extravagant, expensive-to-build sets that allow us to feel we’ve gotten our money’s worth: They fly in from the wings. They rise from under the stage. They’re gigantic, intricately detailed and there are about a hundred of them. Two of the sets spin on their axes, “Les Miz”-style, for the entirety of their scenes.

Sight gags: One song, called “The Hot Dog Song,” features an extended double-entendre-laden riff in which Olive rejects one hot dog after another, for being too short or to thin, each one held up for her inspection by a helpful vendor. Finally, a 2-foot-long bologna with the girth of a baseball bat rises slowly from under the counter. This seems to satisfy her. Later, as rehearsals for the play within the play progress, we are treated to Warner Purcell’s paunch, already large, expanding a little more with each passing scene until finally it’s popping out of his clothes, which need to then be tied together with rope.

Legs: Stroman, a choreographer and a director, presents us with show-stopping dance numbers for every taste — jazz, tap, ballet — and the dancing is exquisite. And she takes advantage of the 1920s setting to stage a variety of Ziegfeld Follies-inspired numbers. And those Follies dancers — wow.

An adorable dog: This time it’s a Pomeranian.

The only things missing are children and a torch song. I can’t speak to the lack of children, but it seems to me that torch songs have gone out of fashion or been relegated to the local karaoke bar.

Even after you recognize what Allen and the gang are up to, you still have to admire their perfect execution. The songs have been woven into the story and their lyrics reworked so that they do the characterological and narrative work that show tunes were traditionally meant to do. The acting is capable and sometimes, especially in the case of the astonishingly talented Heléne Yorke, inspired. The penultimate scene, in which the largest of those giant set pieces spins and spins and spins and all the narrative threads are resolved at once, is so clearly choreographed that it seems almost filmic. Even Allen’s jokes, which, let’s face it, are staler than your grandmother’s matzo, feel earned and justified in the context of the show’s 1920s setting.

This is how the professionals do it. They spread the schmaltz so carefully that it almost looks like art.

But let’s return to the story. “Bullets over Broadway” is essentially about a sadly deluded playwright who has tragically conflated commercial and artistic success. By presenting this story in the most garishly commercial of theatrical forms, and presenting the playwright’s lack of commercial sensibilities as a lack of talent, Allen, Stroman and Kelly are demanding that the audience make the same conflation. They’re proclaiming that we can rely on the market to tell us what art is, that the quality of a piece of art can truly be measured by how much money it brings in. Entertainment is all. Eugene O’Neill would be rolling in his grave.

I admire the craft on display. I recognize how difficult it must have been to fit together all the elements a Broadway production of this magnitude requires in a way that feels seamless and intentional instead of gratuitous. If I succumb, if I stop trying to tease meaning out of the relationship between the story being told and the spectacle on display, I can find myself momentarily enthralled by the experience. But I can’t help thinking that the pageant on display is built around a central lie. It’s selling us a lie. If we let it, it’s indoctrinating us in a lie.

After the show, equally charmed and depressed by what I’d experienced, I grabbed my coat and headed to Sardi’s for a martini. It seemed the only right thing to do.

“Bullets Over Broadway” opened on April 10 at the St. James Theater in New York.