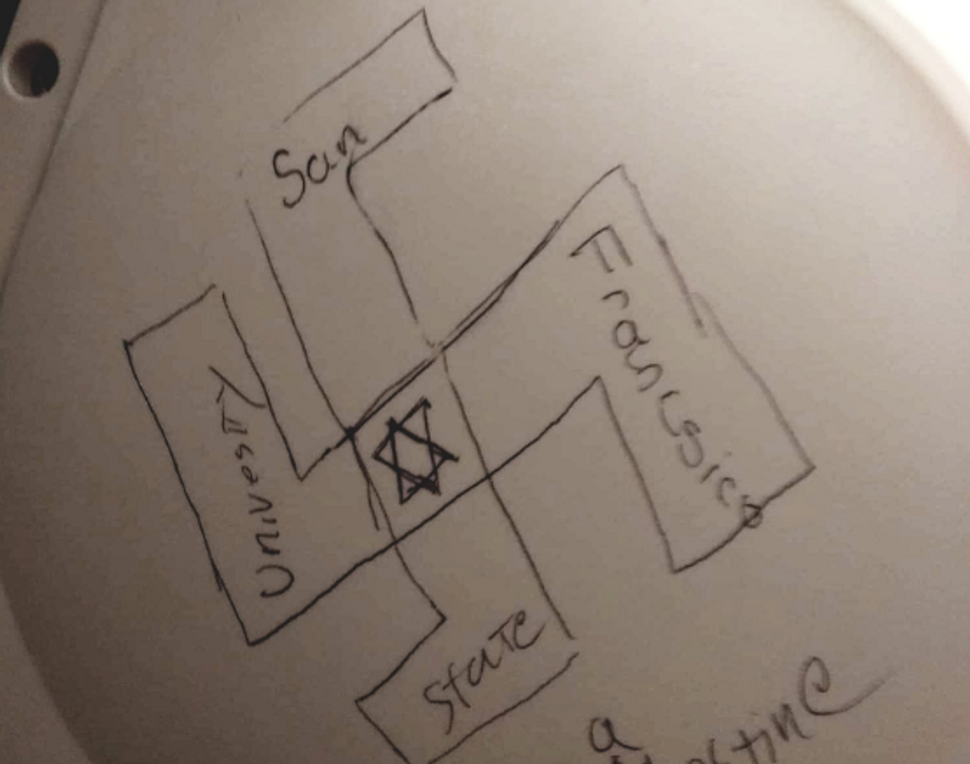 A swastika found at San Francisco State University, May 2019. Image by Siamak Kordestani/Twitter

Reports of four different cases of swastika vandalism were published in four different cities on Wednesday, the latest examples of anti-Semitic incidents that have affected the Jewish community this month, ranging from defacement of property to attempted arson.

In New York City, police are investigating who drew a swastika on the front door of the JCC Brooklyn Clinton Hill, the Brooklyn Paper reported. The vandalism was discovered at 7:00 a.m. by an employee of the Jewish community center, which offers daycare, preschool, after-school and summer camp programming.

Jewish neighborhoods in Brooklyn have seen in the past year several anti-Semitic assaults — especially those targeting visibly Orthodox Jews — as well as several cases of anti-Semitic vandalism.

In Newton, Massachusetts, a suburb of Boston with a large Jewish population, a student at F.A. Day Middle School found a swastika and “threatening language” drawn on a desk, the news website Wicked Local reported. “We are all outraged when symbols of hate appear anywhere in our community,” Principal Jackie Mann wrote in a letter to parents. “We are proud of the students who reported the incident and I have thanked them for speaking up when they witnessed an act of hate in our school.” Swastikas were also found at schools this week in Westwood, Sharon and Brookline.

This is not the first time Day Middle School in Newton has had to confront this issue; swastikas and messages like “burn the Jews” were found on school grounds, in bathrooms and even written on class assignments during the 2015-16 school year, Wicked Local recounted.

In San Marcos, California, a suburb of San Diego, sheriff’s deputies are investigating who drew a swastika on a street sign outside the Brookdale Senior Living retirement home, local news station KUSI reported. The facility is not affiliated with the Jewish community, but released a statement calling the act “unacceptable.”

San Marcos is around a 20 minute drive from Poway, where one person was killed and three more injured in a shooting at the Chabad of Poway synagogue last month. The suspect attended university at California State University, San Marcos.

And in San Francisco, graffiti featuring a swastika embedded with the words “San Francisco State University” and a star of David alongside the caption “free Palestine” was found in a school restroom, J., the Jewish News of Northern California reported. SFSU student Daniel Yeluashvili told J. that he’d seen similar graffiti at the school before. Outgoing university president Leslie Wong released a public statement condemning the incident and promising an investigation.

Wong has repeatedly apologized in recent years over continued allegations of anti-Semitism at the school. Elsewhere in the city, Manny’s, a cafe/bookstore run by a liberal Jewish political activist, has been targeted with anti-Semitic graffiti and seen weekly protests by far-left organizers over their claim that the owner is a “Zionist gentrifier.”

The four incidents reported on Wednesday are far from the only events causing concern in Jewish communities around the country. In Massachusetts, a Chabad center in Arlington was hit with two arson attack attempts in the span of a week. In Chicago, a downtown synagogue was hit in an attempted Molotov cocktail attack on Saturday night, around the same time that cars parked outside a synagogue on the city’s north side got their windows smashed.

The Anti-Defamation League’s annual anti-Semitism audit found 1,879 reports of anti-Semitic incidents in 2018, the third-highest number on record. That number included 774 cases of vandalism. According to the report, more than 70% of the total incidents were attributable to right-wing individuals, though as ADL Center on Extremism director Oren Segal told JTA, “Most anti-Semitic incidents are carried out by average Joes and average Janes,” not people affiliated with extremist groups.

According to the FBI’s 2017 statistics, around 30% of hate crime vandalism targets Jews, who comprise 2% of the U.S. population.