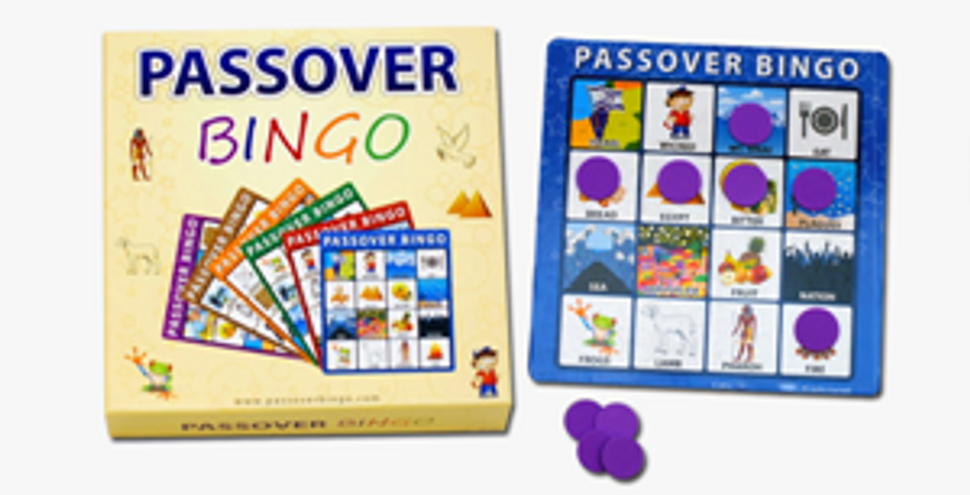 Image by Courtesy of Tamara Pester

Passover, which starts on March 25 this year, is just around the corner. Families can keep children involved in the Seder with Passover Bingo, a board game invented by Denver lawyer Tamara Pester.

“I have a niece and nephew who are now 9 and 12, and we always do Passover at my sister’s house in St. Louis,” said Pester. “My niece and nephew would get really restless during the Seder, so I wanted to do something to keep them engaged.”

The game, which retails for $24.99, features six colorful game boards with Passover keywords such as Egypt and Elijah. The game also includes 96 foam markers, and is recommended for children ages three and up. Like secular versions of bingo, players score Passover Bingo by getting several squares in a row.

Pester came up with the idea for Passover Bingo during a Passover Seder several years ago, and made the first prototype out of construction paper. Her niece and nephew enjoyed the game so much that she decided to make the game available to the Jewish community as a whole.

“Over the past year and a half, I got a graphic designer, I found a manufacturer and I made it happen,” she said. The game ended up as an international effort, with the graphic designer based in Pakistan and the manufacturing based in China.

To help fund the project, Pester turned to Jewcer.com, which offers crowd-sourced funding for Jewish projects. “Actually, the Jewcer people contacted me because they’d never done a promotion with a product before,” she said. The Jewcer site waived fees and helped Pester raise nearly $3,000 for the game. To date, Pester has sold 150 of the games through Jewcer, the Passover Bingo website and several synagogue gift stores. Passover Bingo is also available at two local Denver bookstores, the Tattered Cover and Bookies. Group discounts are available for Passover Bingo for organizations interested in ordering multiple copies of the game, and gift certificates for the game are also offered on the website.

Pester’s version of Passover Bingo has received a rabbinic blessing from a rabbi at the Jewish Experience in Denver. The game also includes a vocabulary list to educate people about Passover, which has made it popular with some Messianic Jews as well. “I think it’s a good way for everyone to learn about Passover,” Pester said.

Wendy Steinberg, a mother of three boys who lives in Cincinnati, said her family has enjoyed playing Passover Bingo. “My kids enjoyed playing this game since Hanukkah,” she said. “They love it.” Steinberg’s sons range in age from three years old to nine years old, but she said the game holds their attention. Steinberg said her family has played Passover Bingo like a regular bingo game, using the vocabulary list instead of playing it by reading along with the Haggadah. “I thought it was really good for the whole family,” she said.

Steinberg knew Pester from BBG, the B’nai B’rith Youth Organization’s group for teenage girls, while growing up in Denver. Steinberg ordered Passover Bingo as a Hanukkah gift, but said she might order another one that can be played during Passover because it will be free of chametz. “My husband and I were not raised Orthodox Jewish, but we’ve become more observant,” she said.

Although prizes are not necessary to enjoy Passover Bingo, Pester suggested prizes for Passover Bingo such as chocolate, money or other toys to keep children’s attention. The child who finds the afikomen during the Passover Seder could also win Passover Bingo as a prize, Pester said.

Passover is the most-widely celebrated Jewish holiday in the U.S., according to the National Jewish Population Survey conducted in 2000 – 2001. The traditional Passover Seder recounts the exodus of the Jews from Egypt and commemorates the event by eating foods such as matzah, bitter herbs and charoset. “It really does work to make your Seder more fun, more entertaining and keeps people engaged,” Pester said of Passover Bingo. “As you’re going through the Haggadah, you’re cross-referencing the list to make sure you don’t miss a square.”

Although originally designed to be played during a Seder, the vocabulary list included in the game can make it a game for other times of the year as well.

“You can play it at any time… anytime you want to get excited about Passover,” Pester said.

Nina Snyder is a freelance writer based in Denver who writes a blog about the Mile High City at http://denver.about.com.