Cupid in a Kippah 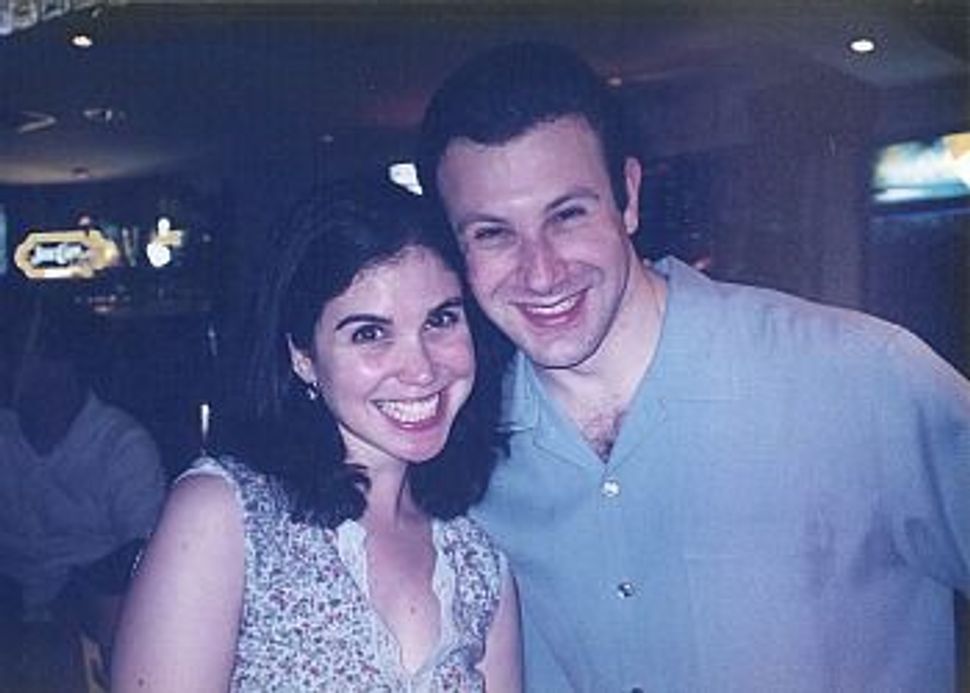 On Valentine’s Day, one is absolutely the loneliest number. It helps if you can make plans with some single friends, but most people would prefer to be out with their perfect person.

Valentine’s Day isn’t our holiday, religiously speaking — Jews have Tu B’Av — but it is an American holiday, and Valentine’s Day nicely complements the Jewish notion of the bashert.

My grandmother used to say, “There’s a cover for every pot.” But what do you when you can’t find your cover? As Forward editor Jane Eisner recently wrote in an editorial, many 30- and 40-something American Jews are single, and likely still searching. If you’re not Orthodox, you’re not turning to a shadchan. You have JDate, and you have mutual friends.

That’s how I met my husband in January 2003. I had recently survived an ugly break-up and doubted that dating was a good idea. But I also figured my mother had a point that I couldn’t expect my bashert to ride his horse up the elevator of my apartment building and knock on my door; after all, he probably didn’t even have my address. So, hoping against hope, I pushed myself to be social instead of staying home to bond with my TV. I emailed a college friend about a fundraiser for poor Argentinian Jewish children, organized by Latin Jews in DC. There would be food and dancing; it looked like fun, and he should come along. My friend emailed a friend of his as well, and both of them showed up that wintry night.

“I’m Todd Braunstein,” this new person said to me, smiling. “I know who you are,” I assured him, and indeed I did. Todd had been a senior when I was a freshman in college, and we had both worked on the campus newspaper. We’d never met, but we knew each other’s byline. I liked him immediately; I couldn’t quite articulate it to my sister later, but there was something different, and wonderful, about him. I knew we had to go out, and luckily, Todd agreed.

Ten years later, we’ve never heard from Latin Jews in DC again. But we love them for bringing us together.

I’m now married to my soul mate and best friend. He understands my (very Jewish) humor and has always been my best editor. I remain grateful to our mutual friend, who signed the Ketubah at our wedding, and for never having to worry about the identity of my Valentine again.

Reflecting on that decade mark recently, I considered how I could pay my good fortune forward this year. My Valentine’s Day Resolution is to play matchmaker for some of my single and very eligible friends. So far, my female friends have been feeling more adventurous about blind dates, but I’m hoping my male friends will soon catch up, ready to take a leap of faith. I’d also like to invite the Sisterhood’s readers to join me in this effort. Whether or not Jewish institutional leaders decide to focus communal resources on marriage, we can all make a difference now. Matchmaking for the long-term isn’t so easy, but it’s not rocket science either. We all know someone who’s really terrific but doesn’t seem to have met The One just yet. Why not be proactive and offer to make introductions this year?

There’s nothing wrong with being single, but there are certain perks to knowing your complement, like having someone who gets you, laughs at your jokes, and even wants to raise Jewish children with you. Especially if you’ve already found your own bashert, why not play Cupid and help a fellow Jew? Happiness is best when shared, and it needn’t be confined to one day in February.

Cupid in a Kippah