Japan, home to the Summer Olympics, has a rich Jewish history 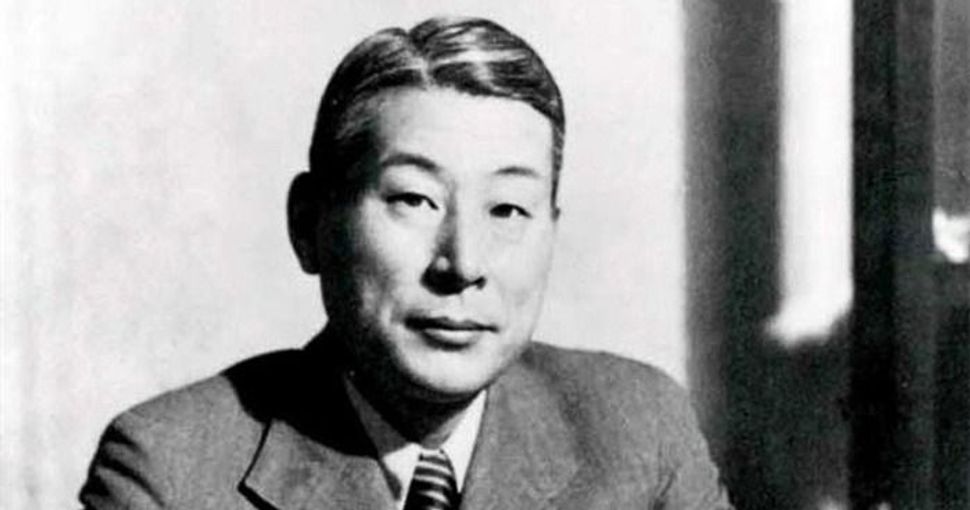 Japanese Imperial Consul in Lithuania, Chiune Sugihara, hand wrote thousands of visas, working 20 hours a day and producing a month’s worth of visas on a daily basis. Courtesy of Wikimedia Commons

As athletes converge on Japan for the Olympic Games that begin July 23, they won’t find any restaurants that serve kosher meat, but they will find a rich Jewish history dating back to the arrival of Portuguese conversos (Jews who converted to Catholicism under severe persecution) who arrived in Japan as merchants in the early 16th century.

But it wasn’t until after Commodore Matthew Perry arrived in 1853 and forced Japan to trade with the West that the first Jewish settlers – consisting of at least three Jewish families – arrived in 1586. Five years later, Jews settled in Yokohama near Tokyo. The earliest Jewish tombstone is dated 1865 and by the late 1860s, approximately 60 Jewish families lived there.

Another group of Jewish conversos, this time from Spain, arrived in 1572. They arrived in Nagasaki on ships from Portuguese Macau. Once there, they returned to practicing Judaism and resumed their family names, including the Levi family. By the turn of the century, Nagasaki was the largest Jewish community in Japan.

Rabbi David Kunin, who served eight years as spiritual leader of the Jewish community of Japan, an egalitarian synagogue in Tokyo, said another community was founded in Kobe by primarily Sephardic Jews from Iraq and Syria. There were also Ashkenazi Jews from Poland and others from Russia who were fleeing pogroms.

The Japanese general who rescued 20,000 Jews fleeing the Nazis 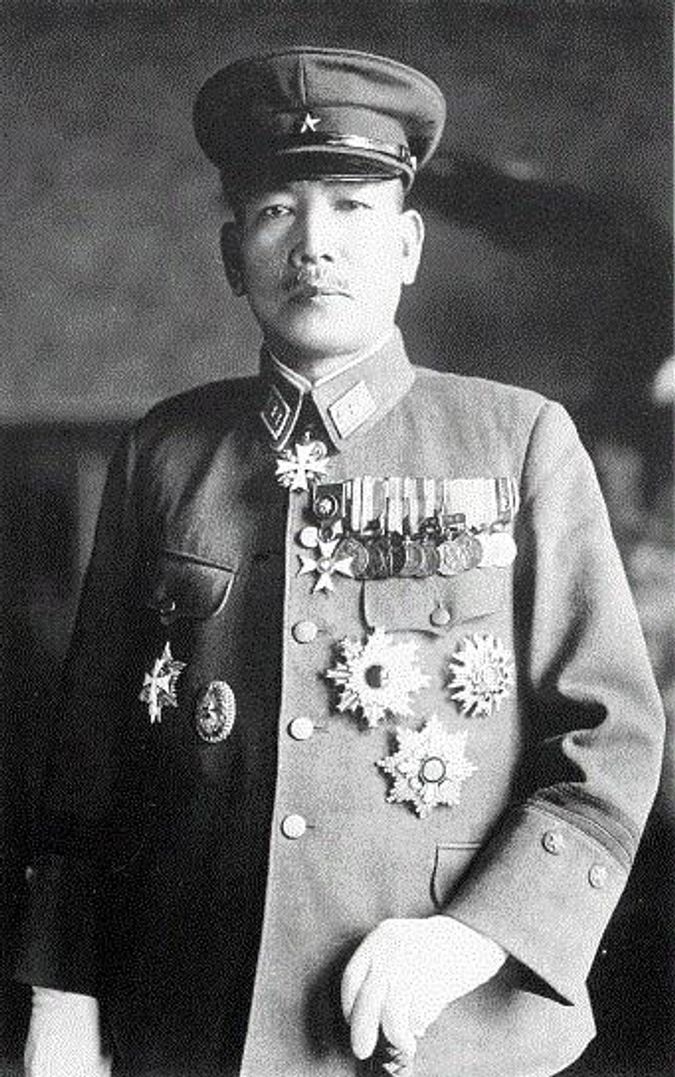 With the outbreak of World War II, Japan sided with Germany and prohibited Jews in Kobe to travel or to conduct business. But they were not mistreated and the chief of police even told the Jews they had nothing to fear.

This doctrine of non-discrimination against Jews had been formalized in December 1938 when top-level ministers (the prime minister, foreign minister, finance minister, army minister and navy minister) met for what is known as the Five Minister’s Conference. There they decided to protect all Jewish refugees because expelling the Jews as the Germans demanded went against racial equality that Japan had espoused for years. Their decision came at a time when both the U.S. and Britain imposed strict limits on Jewish immigration. In fact, the U.S., Cuba and Canada all refused to permit the M.S. St. Louis permission to dock in June 1939 with its more than 900 Jewish passengers fleeing Nazi Germany.

Jews began a mad scramble to flee Nazi Germany after Kristallnacht on Nov. 8-9, 1938, during which Jewish businesses and synagogues were destroyed and Jews sent to concentration camps. Many Jews fled to Japanese-controlled Shanghai, one of the few places in the world Jews could enter without a visa. Major General Kiichiro Higuchi permitted their entry and it is estimated that 20,000 Jews were saved.

Nazi Foreign Minister Joachim von Ribbentrop was furious with Higuchi’s actions and demanded he be punished. But Hideki Tojo, chief of staff of the Kwantung Army and Higuchi’s superior, rejected the request, reportedly saying Higuchi’s action was “the right thing to do from a humanitarian point of view.”

A mad dash to handwrite visas and save Jews 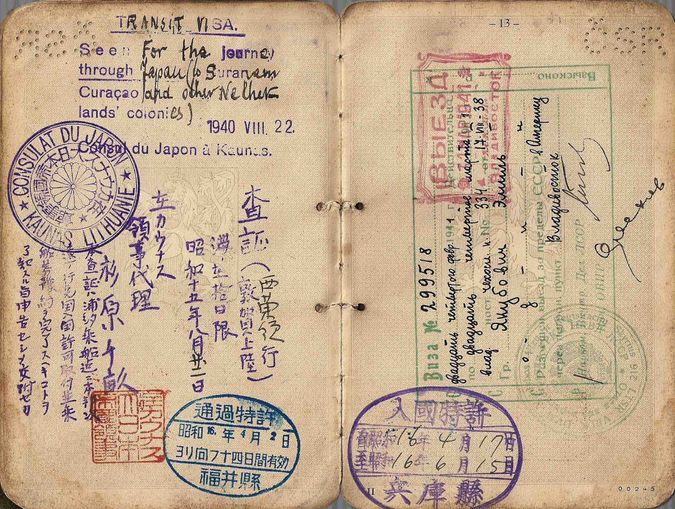 A 1940 issued visa by consul Sugihara. The visa holder was managed to escape the Nazis in 1939. Courtesy of Wikimedia Commons

Despite Japan’s decision to protect Jewish refugees, the country’s government was not willing to permit its emissaries to help Jews in Germany escape the Nazis. In fact, the Japanese Imperial Consul in Lithuania, Chiune Sugihara, was pointedly told by his superiors not to help Jews trying to flee the Holocaust in 1940. He was told to issue visas to only those who had gone through proper immigration procedures, had enough funds and had a visa to exit Japan for another country. But he defied three directives, believing that unless he helped, the Jews would be in danger.

“I may have to disobey my government,” he reportedly explained, “but if I don’t, I would be disobeying God.”

As the crowd of Jewish refugees who had fled Nazi-occupied Poland grew outside his office from hundreds to thousands, Sugihara began writing visas. From July 18 through Aug. 28, 1940, he spent 18 to 20 hours each day handwriting visas – producing a month’s worth on a daily basis. By the time he closed the consulate on Sept. 4, he had handwritten an estimated 2,193 transit visas that saved 6,000 Jews – some say as many as 10,000 Jews. Witnesses reported that even after boarding a train to leave, he was writing visas and tossing them out the window and into the crowd as the train pulled away from the station.

Many Jews with Sugihara visas then fled across the Soviet Union and took a boat to Kobe, Japan. Some of the Sugihara survivors stayed in Japan until they were deported to Japanese-held Shanghai, where they joined other Jews who had been there since the mid-1930s.

Meanwhile, Sugihara was reassigned to East Prussia and then served as consul general in Prague before he and his family were arrested and imprisoned for 18 months by the Soviets. After their release, the Japanese Foreign Ministry reportedly dismissed him for the visas he had written in Lithuania and he retired in disgrace and self-exile. Israel honored him and listed him among the Righteous Among the Nations at Yad Vashem. He passed away in 1986. 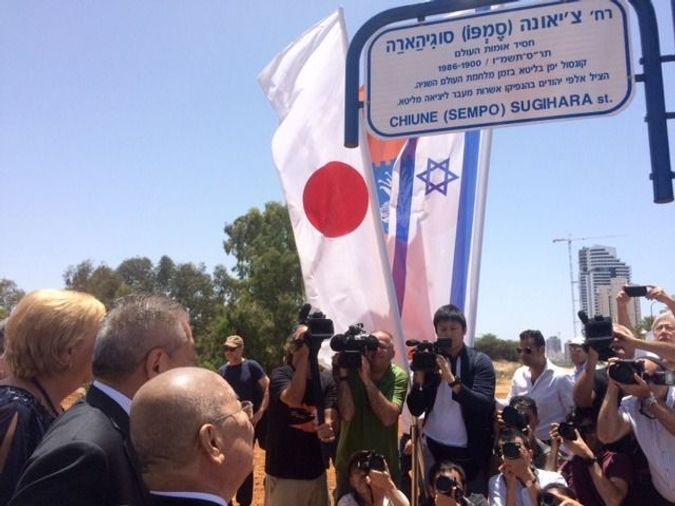 A street in Tel Aviv is named after the Japanese diplomat who rescued thousands of Jews from the Nazis. Courtesy of Wikimedia Commons

Japan, home to the Summer Olympics, has a rich Jewish history