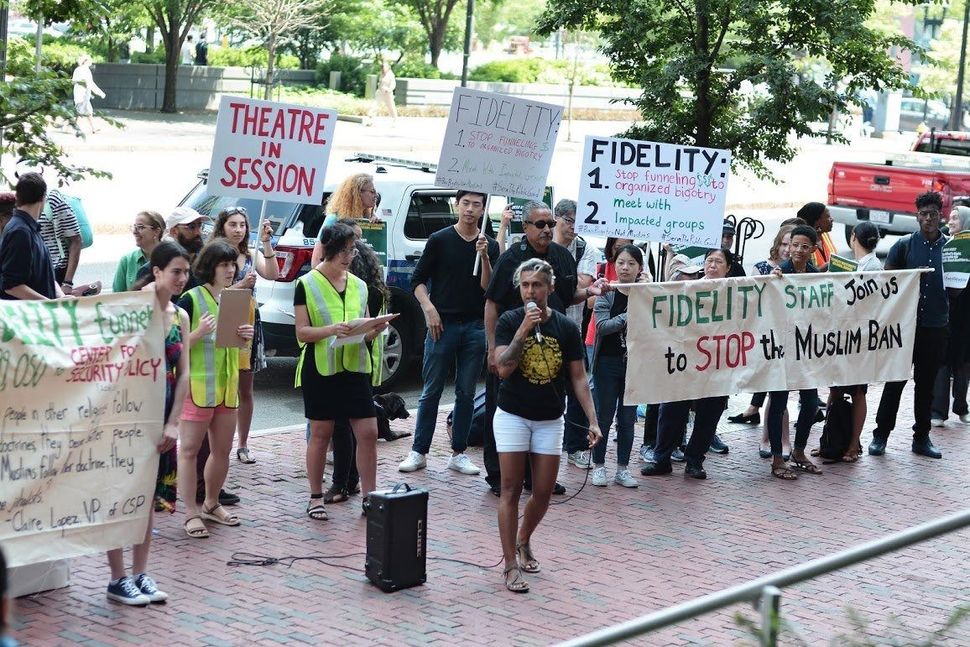 Two progressive Jewish groups have joined a coalition calling on financial giant Fidelity to stop facilitating donations to right-wing organizations, including one that bankrolls Jewish settlements in the occupied West Bank.

.@Fidelity must disclose their role in enabling anti-Palestinian violence globally.

Millions are flowing from Fidelity and into orgs like Central Fund of Israel, a key org funding illegal Israeli settlements displacing Palestinians.

Fidelity has, at the request of clients, directed millions of dollars to controversial nonprofits through so-called “donor-advised funds,” which allow wealthy individuals to funnel tax-deductible donations through third parties that obscure the flow of money.

The Unmasking Fidelity campaign last week added the two left-wing Jewish groups to its coalition. The coalition is calling on Fidelity Charitable, which allows the company’s clients to make tax-exempt donations, to reveal past contributions to organizations that it says promote racism and anti-LGBT sentiment and to cease making such donations.

The broader campaign is largely aimed at Fidelity’s donations to nonprofits that promote hatred domestically. For example, it cites records that show Fidelity Charitable sent $4.6 million to 23 organizations designated as hate groups by the Southern Poverty Law Center in 2017, 2018 and 2019. But Unmasking Fidelity seeks to end all the company’s contributions to nonprofits that organizers say promote hateful ideology and IfNotNow and Jewish Voice for Peace, both of which are focused on Israel, have pointed to $25 million in donations to the Central Fund of Israel, which pays for Israeli settlements in the West Bank.

Fidelity Charitable did not respond to a request for comment Tuesday about the Unmasking Fidelity campaign and what, if any, standards they set for directed gifts.

While foundations are typically required to disclose both who controls them and how they distribute their money, donor-advised funds render this information opaque. A family foundation could hand over $100,000 to Fidelity Charitable and then direct Fidelity to make donations on its behalf. But because Fidelity handles billions of dollars in donations each year, there is no way to determine how any given transfer of money to Fidelity is spent, nor who is responsible for Fidelity’s contributions to organizations like the Central Fund of Israel.

Individuals are already able to make anonymous contributions directly to nonprofits, but IfNotNow and other organizations active in the Unmasking Fidelity campaign argue that the company, which also runs a retail investing business, makes the process easier.

“Obviously this is a larger systemic issue about how money can be funneled into problematic causes,” said Naftali Ehrenkranz, a digital organizer with IfNotNow. “But the first step is just putting pressure on Fidelity and other groups that help make this process possible.”

Individuals looking for a variety of tax benefits give through Fidelity Charitable, and most other donor-advised funds, which in turn distribute donations to a broad list of charities, many of which have no political agenda.

But donor-advised funds run by local Jewish federations have generated controversy in the past, including when the Jewish Community Federation in San Francisco was revealed to be funding Canary Mission, a controversial website targeting pro-Palestinian activists. Federation officials said at the time they had moved to tighten rules around which charities they allow donors to direct gifts toward prior to the revelation.