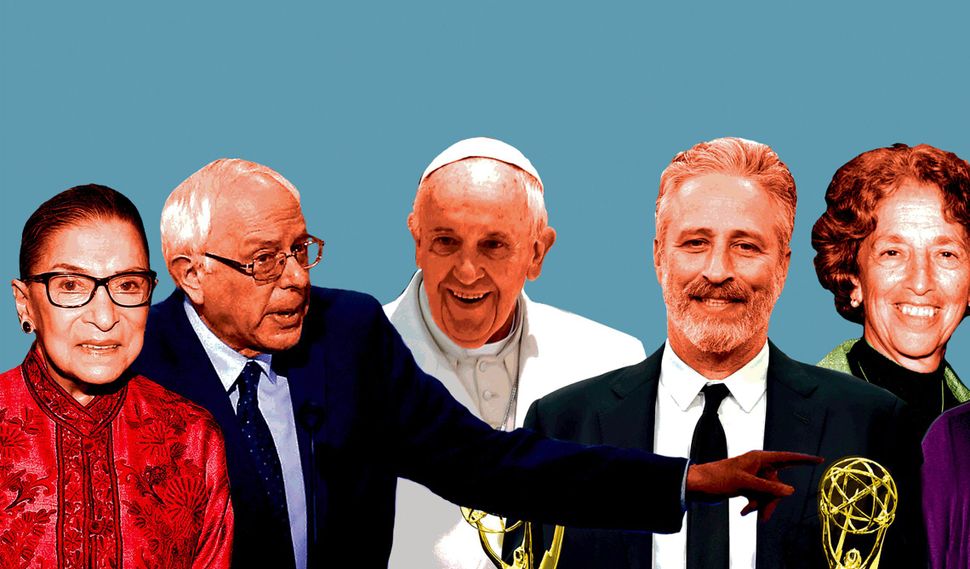 This was the year when fear had a face,
And its own sound, an ugly drumbeat.
It flowed right through the presidential race,
Relegating all else to the back seat.

Fear of the other, fear of the unknown,
Seeped straight into the public square.
Fear of terror, foreign and homegrown,
Left a stench of hate in the air.

But through the year, from beginning to end
In Israel, the U.S. and elsewhere
Were those who sought not to scare, but to mend,
Bringing hope to a time of despair.

Who would have thought that a socialist Jew
Would draw such excitable throngs?
proved what was old could be new
As he campaigned to right all those wrongs.

Think of what happened this year for gay rights
Thank Evan Wolfson for his win in the courts.
Dustin Fleischer scored big in all his fights,
A Star of David stamped on his shorts.

As the nation debated a deal with Iran,
Pols like Jerry Nadler and Chuck Schumer
Took opposing sides, each one bent on
Separating good facts from bad rumor.

Though profiles in courage were scarce in D.C.,
Dianne Feinstein released a torture report.
Nor did fear stop Notorious RBG
From standing her ground at the high court.

As some threatened to close America’s door
There were Jews who said: Open it wide!
They welcomed the needy, the sick and the poor
Fighting a faith ban with integrity and pride.

Fifty years after a landmark accord
Improved ties between Catholic and Jew
Pope Francis showed all why he’s adored.
Some wondered: Can he be our Pope, too?

Brave writers and actors helped us explore
The new lives of the newly “Transparent.”
Thanks to Jill Soloway and Jeffrey Tambor
For redefining what is meant by grandparent.

Hurrah for the women in Israel and here
Who stood against religious repression.
Clergy and whistleblowers, straight and queer
They honored Judaism’s highest expression.

We’re in awe of those who overcame fear
To offer a live kidney donation.
Which is why Renewal deserves a big cheer
And Mendy Reiner a special citation.

There were also Jews too many to name
Who countered fear by just doing their work.
They served and taught, without pretense or shame,
Fulfilling duties that others might shirk.

When fear stalked the streets of Jerusalem,
And college campuses grew contentious,
Jews worked with others not to succumb
Striving hard for interfaith consensus.

Some deserve praise for how they bade farewell
Keeping judgment well in their sights.
We’ll miss Jon Stewart raising his hell
And Ruth Messinger, “Madonna of human rights.”

As always, the year brought too many deaths
Of people who truly do inspire.
Theo Bikel, Dolph Schayes took their last breaths.
The Sassoon family lost to a fire.

Here at the Forward we tried our best
To present the news without favor or fear.
From Iran to the White House, we didn’t rest
In this frightening, fascinating year.

We thank all who read, advertise and donate,
Your support keeps us strong and alive.
Let us push away fear and instead celebrate
The lasting contributions of two-oh-one-five!