Are Ivanka And Jared ‘Good For The Jews’? 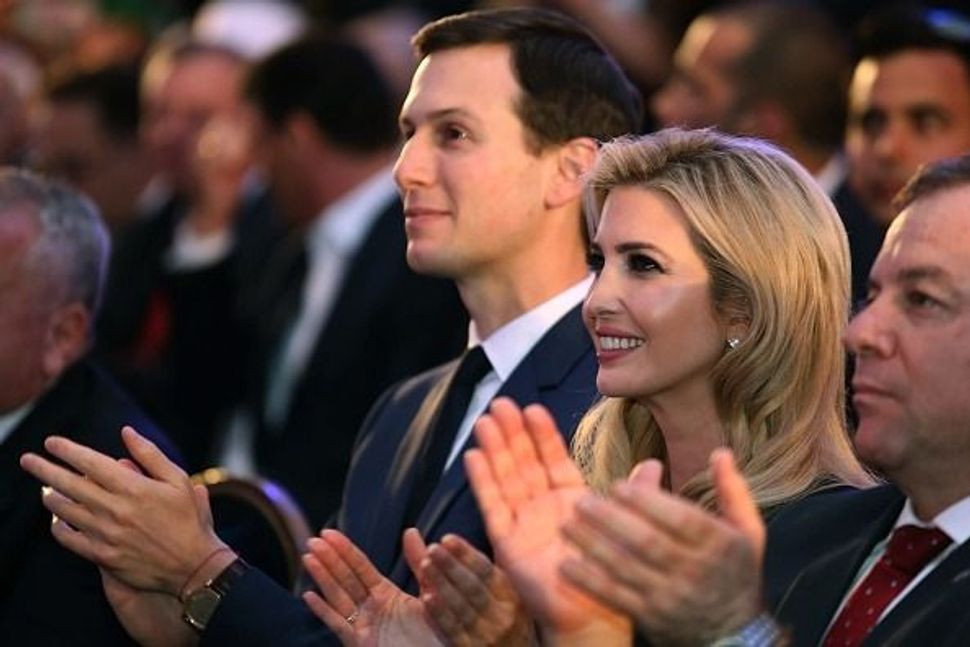 The two reporters who wrote the story splashed across the cover of the Sunday New York Times Style section asking whether Ivanka Trump and Jared Kushner are “good for the Jews” managed to quote only one woman — and 11 men.

Sigh. I’m afraid this isn’t the first time the vaunted Times — a news organization I deeply admire and read faithfully every day — minimized the voices of half our population, and I fear it won’t be the last. So I’ll help out with at least this one American Jewish woman’s reaction.

The story put a new spin on a well-worn dynamic in the Trump administration, the first to have Orthodox Jewish family members with prominent White House positions. To some Jews, the Times wrote, the First Daughter and her husband serve “as a bulwark pushing the Trump administration toward pro-Israel policies, most notably the decision to move the U.S. embassy from Tel Aviv to Jerusalem. To many others, they are the wolves in sheep’s clothing, allowing Mr. Trump to brush aside criticism that his words have fueled the uptick in violent attacks against Jews.”

Many men and one woman then debated the point, taking predictable positions. (I won’t repeat them; you can read for yourself.)

What was missing is something I have said since he took office: Trump can love certain Jews and still act in ways that are deleterious to Jewish Americans. In a piece I wrote earlier this year, I quoted the journalist Franklin Foer’s witty observation: “Philo-Semites are anti-Semites who like Jews.”

I actually don’t consider Trump an anti-Semite, and have never called him one, because I don’t know what’s in his heart. I am sure that he loves his Jewish grandchildren just as much as his non-Jewish ones.

But he can love certain Jews, admire other Jews, even employ them in important positions, and still hold stereotypically discriminatory attitudes and pursue policies that are antithetical to Judaism and potentially harmful to Jews. For every American Jew who feels safer because U.S. Ambassador to Israel David Friedman now works in Jerusalem there are (according to polls) three or four who feel less safe because of the many times Trump has trafficked in anti-Semitic dog whistles and pursued policies that put Jews at risk. (See: Pittsburgh, October 27. 2018.)

And women especially know this. After all, Trump says he loves woman, surely (at some point) loved all three of his wives, appears to love his daughters, shares his business with Ivanka, and has appointed women to his cabinet — though far fewer than Presidents Obama and Clinton did.

But while in office, he demonstrably and regularly demeans and denigrates women, especially women of color; has been credibly accused of paying hush money to former mistresses; dismisses women who bravely come forward with their #MeToo experiences; pursues policies that are designed to restrict women’s reproductive rights — and as a result, the gender gap in the recent midterms was the highest it’s been since at least 1992.

I can cite the same paradoxical dynamic with children. I’m sure that Trump loves all five of his kids, but that hasn’t stopped him from implementing policies that, among other immoral things, keeps hundreds of refugee children locked up for months apart from their families.

That’s what I would have told the New York Times, anyway.

We all have our blind spots — that’s why reporters have editors, and even editors have editors. I am especially attuned to circumstances in which women are poorly represented, or not represented at all, because I’ve spent a lifetime trying to address this imbalance, not to satisfy some abstract quota, but to present the fullest and most accurate range of views. Sometimes, I’ve needed help seeing other ways I’ve unintentionally excluded.

What else I’m writing. As the news unfolded about Facebook last week — thanks to an amazing investigation by, yes, the Times — I found myself reassessing what I thought of Sheryl Sandberg. I had the opportunity to interview her last year, and was taken in by her vulnerability and her appreciation for Jewish tradition. Alas, no more. Here’s why.

What else I’m reading. I have long followed Dan Ben-David, a scholar at the Shoresh Institution for Socioeconomic Research in Tel Aviv, and his latest report on overpopulation and demography in Israel is eye-opening and disturbing.

Far from the glossy towers and digital accomplishments of the Start-Up Nation, Ben-David shows us another Israel, with low labor participation rates, very poorly skilled adults and an economy saturated by unskilled workers from abroad. This dire situation is compounded by the highest fertility rate in the developed world, which will soon make Israel the most congested country in the OECD and, in a few decades, second only to Bangladesh.

He argues that the best way to counter these demographic trends is by dramatically increasing education levels throughout the country. “Israel has universities that are among the world’s best,” he notes with irony, “and a school system that yields national scores in math, science and reading that are below those of nearly every other industrialized country.”

Forward readers vote! Thanks to all who shared your stories, photographs and prayers about voting in this year’s vital midterm elections and especially those who celebrated the First Vote. We collected many of your contributions here and hope this project will inspire further civic action.

Looking forward. When Rabbi Shai Held, one of the founders of Hadar, asked me to moderate a conversation between him and Rabbi David Ellenson, the longtime leader of Hebrew Union College, how could I possibly say no to being on stage with two brilliant and thoughtful people? If you are in Manhattan, join us on Tuesday, November 27 at Congregation B’nai Jeshurun when we explore the big questions in modern Jewish life. Details here.

And before then: Thanksgiving. Ours will be spent with lots of family members new and old, brought together by good food and drink, and the simple blessing of being together. I wish the same for you and your loved ones.

Are Ivanka And Jared ‘Good For The Jews’?