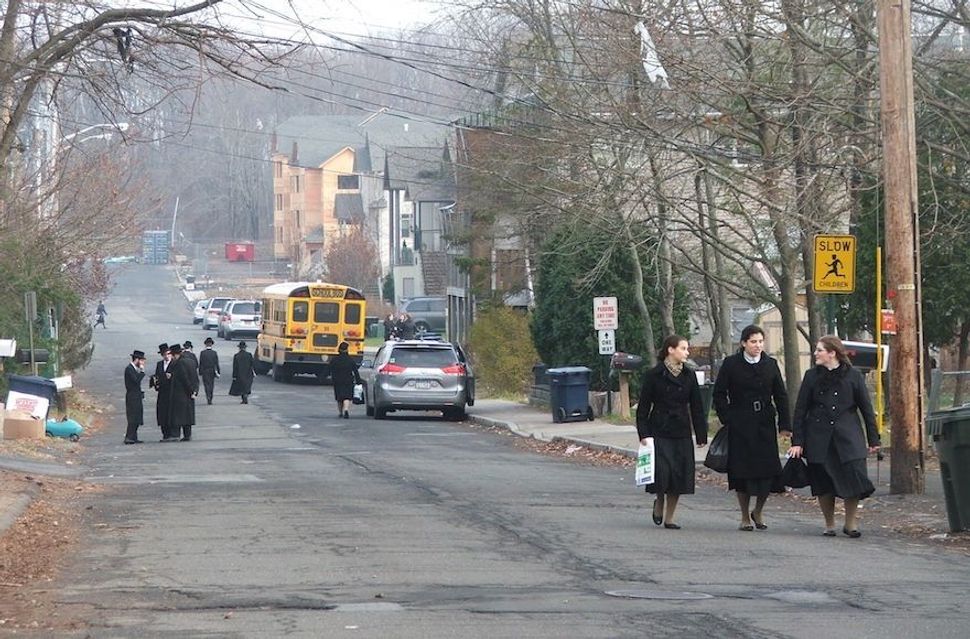 Rockland County, New York — home to New Square, an all-Hasidic village, above — has the highest concentration of Jews of any county in the country, according to a 2020 survey released July 8, 2021. Photo by Uriel Heilman

A lot of antisemitism — perhaps even most — has little or nothing to do with the State of Israel. While anti-Zionism often serves as a helpful cover for overt bigots, conflating the two not only misunderstands and misstates the problem, but is also dangerous.

Last week, the American Jewish Committee published a survey about antisemitism in America and highlighted a finding that “both Jews and non-Jews” — at least the ones who took the survey, it should critically be noted — “regard anti-Zionism as a form of antisemitism.”

While the survey is a tool that can inform how we assess the level of threats we face, the Forward’s opinion editor also highlighted some flaws in the survey, as well as legitimate concerns over how the AJC intends to exploit it, potentially to shut down anti-Israel speech.

But the survey’s flaws go beyond the objections that were raised in the piece.

The normalization of antisemitism is an issue we must address — and the study does bear that out. But as a society, and even in much of the Jewish world, we seem only capable of discussing antisemitism today through the prism of anti-Zionism. The recent discourse seems to be filled with nothing but discussion of conduct or speech which is deemed anti-Israel, as if that is the sum total of the challenges we Jews face.

Doing so means that a large portion of antisemitism in America — and the world — remains unaddressed.

When you think of antisemitism in America, what comes to mind? If your thoughts take you to Squirrel Hill or Poway, recall that the murderers in both cases wrote about Jewish support for refugees, which they saw as especially terrible for white Americans, and blamed Jews for the supposed decline of the white race. These attacks had nothing to do with the State of Israel.

When visibly Orthodox Jews were assaulted almost daily in 2019 and early 2020, constituting the vast majority of antisemitic assaults in those years, the attackers either expressed no particular political motivations or spoke about “gentrifiers.” These attacks had nothing to do with the State of Israel.

When anti-Zionist Hasidic Jews in Jersey City and Monsey were murdered, this time by individuals with potential sympathies for left-wing extremist groups, it still had nothing to do with the State of Israel.

When Orthodox Jews are discriminated against in this country with zoning laws and township ordinances while mainstream media outlets wonder whether the Jews themselves are to blame, it has nothing to do with the State of Israel.

And when Hasidic Jews are singled out for allegedly disproportionate COVID-19 regulation violations, and spoken of in the media as if they are vectors of disease — just as antisemites described our forefathers during the black plague — by elected officials who are proud to be pro-Israel, you can bet that it had nothing to do with the State of Israel.

Let me be crystal clear: much of the criticism of Israel is indeed rooted in antisemitism. But we must also recognize the costs of conflating the two.

Reflexive defenders of everything and anything the state of Israel does (I am not, though I will defend the right of the people who live there to be safe and secure) have a vested interest in co-opting the term antisemitism. They can use it to shut down any sort of legitimate criticism of Israel and lock all Jews — especially victims of antisemitism — into defending everything the state does.

The people who contend that all anti-Zionism is antisemitic are also, wittingly or unwittingly, giving cover to those who perpetuate and hand-wave real antisemitism away by citing their support for Israel. Orthodox Jews haven’t forgotten — though many others might have — how National Review’s Kevin Williamson ignorantly asserted, in his tantrum-like defense of staff writer Zachary Evans’s “both-sidesing” of the violence against Jews in New York, that the piece couldn’t possibly be objectionable because it was, he says, “written by a veteran of the Israeli military.”

Those of us who deal with this sort of hate firsthand see that sort of logic used way too often. “How can you say I am an antisemite,” they say, while either actively discriminating or propagating some vicious stereotype about Jews (and especially Orthodox Jews), “when I am such a staunch supporter of Israel?”

The answer is that while loving Israel and loving the Jewish People certainly overlap, they are hardly one and the same — and conflating the two makes Jews less safe.

But worst of all, doing this makes it easier for each and every one of us to avoid our own personal culpability in contributing to antisemitism and antisemitic behavior.

Are you a secular Jew, enjoying your suburban life, and you want to stop Hasidic Jews from doing something as quintessentially American as moving in to your neighborhood because they look differently than you do? That sort of thing normalizes antisemitism. Do you find yourself speaking about other Jews broadly, assigning to all of them the negative attributes of a few of them? That normalizes antisemitism as well. Do you find yourself holding Jews who are not like you are to a standard you would never hold other minority groups to?

None of these have anything to do with Israel, but all contribute to antisemitism.

This is also true when we allow politicians who perpetuate antisemitic tropes to “kosher” themselves by voting for or visiting Israel. One has nothing to do with the other.

When antisemitism becomes about nothing more than something as binary and as tribal as the existence of the State of Israel, it is easier to avoid what the rest of us do to contribute to the real and dangerous antisemitism which culminates in the beating of Jews on the streets of New York and in township meetings around the country.