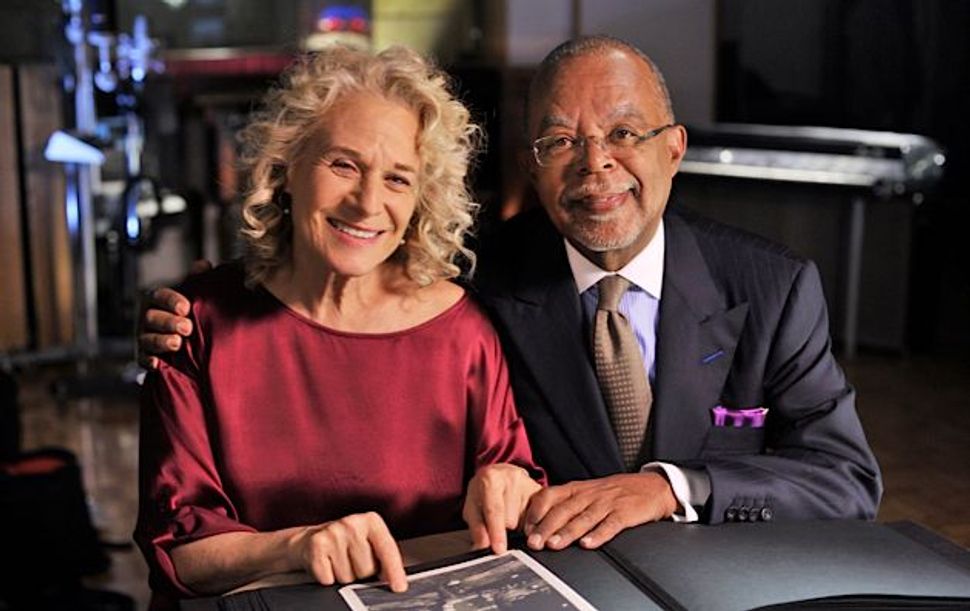 Carole King, Tony Kushner and Alan Dershowitz are the subjects. As always, Gates and his research team have done an excellent job checking the roots of the participants’ family trees. They went back the furthest in King’s lineage, to late 18th-century Russia. But it is the Dershowitz and Kushner segments that prove the most fascinating.

Dershowitz’s mother’s family came from Galicia in the 20th-century when pogroms wrecked havoc there. His grandfather, Naftali Ringer, came first, followed two years later by his grandmother Blima. There was a problem at the dock when she arrived — Naftali had shaved off his beard. As a result she didn’t recognize him and, according to family legend, at first rejected him.

Blima ruled the roost in the Dershowitz household, and she remained observant. Dershowitz claims when he came home from Ebbets Field and declared “The Dodgers won,” she would ask “But was it good for the Jews?”

But she was also very American. “She made my brother and me recite the Pledge of Allegiance every day… America was everything Poland was not.”

Dershowitz’s paternal grandfather, Louis Dershowitz, arrived here when he was 9 years old. His family settled in Borough Park, Brooklyn, where, as an adult, Louis started a small synagogue in the basement of his house. It was to prove important as the Roosevelt administration tried to stem the tied of Jewish immigration. Using the guise of needing personnel for the synagogue — a rabbi, a cantor, a mohel — he was able to get 27 cousins admitted into the country.

Kushner, writer of “Angels in America” and Academy Award nominee for his screenplay of “Lincoln,” grew up in the anti-Brooklyn, Lake Charles, La. His parents moved there from New York when he was just two.

The Jewish population was small, Kushner recalls, but “unapologetic about being Jews.” There was some of what Kushner calls anti-Semitism, but which seems more like ignorance. When Kushner’s mother was dying and losing her hair, someone asked where her horns were. “She thought under the hair there were bumps,” Kushner says.

Growing up in that environment prepared him for coming out. “I knew the model to follow, being Jewish in an anti-Semitic world and being gay in a homophobic world.”

Not all of Kushner’s family got to the U.S. In time to avoid the Holocaust. His maternal grandfather, Benjamin Deutscher, and four of his brothers were able to escape, but the rest of his large extended family was massacred. What happened is ”beyond comprehension,” he says.

King’s life is probably the most familiar of the three, if only because she has received substantial media attention lately, prompted by the success of “Beautiful,” the biographical play about her life. She credits her musical skills to her maternal grandmother, who fled persecution in the Pale of the Settlement. She, the daughter of a baker, used to deliver bread to wealthier families and pressed her nose against the window in envy at their fancy pianos. She made sure her daughter, Carole’s mother, would have lessons and hopefully a career that took her to Carnegie Hall. That didn’t happen, but she lived long enough to see her granddaughter play there.

Carole’s paternal grandparents, David and Molly Gleiman, almost didn’t make it into the country. They arrived at Ellis Island with only $2 between them and unable to read or write. So immigration officials detained them in preparation for returning them to Europe. But a mysterious stranger, Sam Kline, got them out of detention.

King was unaware of how close her grandparents came to being shipped back and had never heard of Kline. They surmised David and Molly changed their name to Klein to honor their savior. Born Carol Joan Klein, she added an “e” to her first name and changed her last to King to make it more show biz acceptable. She told Gates that after four marriages she decided to change her surname back to Klein and is now officially Carole King Klein.

While emotionally satisfying, the program seemed a bit confusing. Rather than tell the story of one of the participants, the show skips around for no particular reason, making the effort seem a bit disjointed.

Gates ends the program suggesting that what the three people learned “strengthened their bond with their Jewish heritage.” Many people of different faiths watch the show, so what I’m about to suggest may not be practical, but I would have liked to have learned how the program affected ties with their religious heritage. Dershowitz, for example, attended yeshiva growing up in an orthodox house. Is he still observant? What about King and Kushner? If you are going to do a program about the roots of three Jews, you might mention their relationship with their religion.