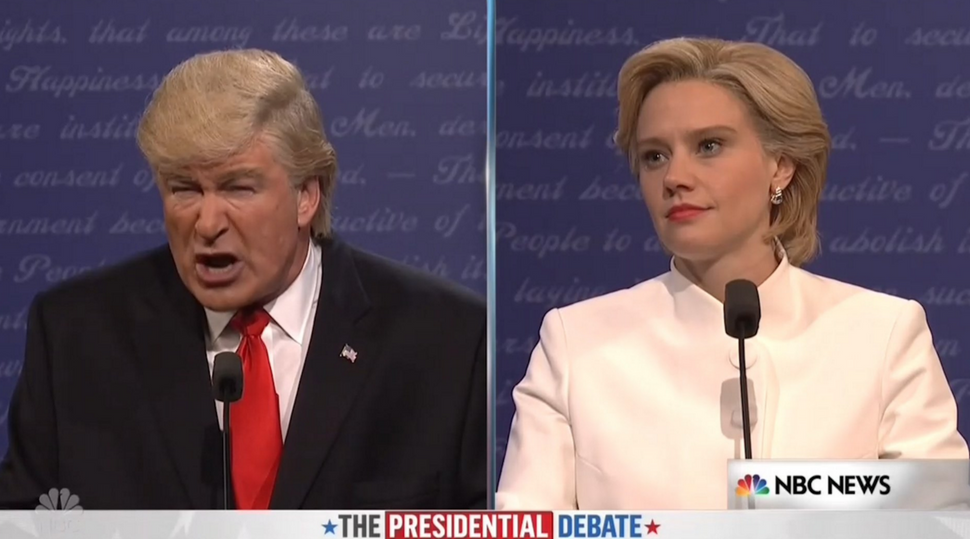 This week we start sharing events outside of New York as part of our normal roster; festivals of arts and ideas in Chicago and Washington, D.C. are up first. There’s a slew of new books to tempt you, regardless of what you’re craving – history, science fiction, some hearty Yiddish humor – and a few nights of comedy to help ward off the pre-election blues.

Whether you think of next Tuesday’s presidential election as potentially apocalyptical or simply annoying, something on which most of us agree is that it will be more fun if preceded by a hearty dose of Larry David’s spot-on Bernie Sanders impression. Luckily, the folks behind SNL agree. They’ll air an election special Monday, November 7th revisiting their best political sketches from this most surreal of seasons. Kate McKinnon’s Hillary Clinton and Alec Baldwin’s Donald Trump will surely be center-stage, but we’re hoping to see a good deal of David as well.

2) Read up on Yiddish fiction from the Forward, newly translated into English

We’re biased, but we think the new anthology “Have I Got a Story For You: More Than a Century of Fiction From the Forward” edited by Forward critic-at-large Ezra Glinter is a stunner. Over its 120 years in print, the Forward has published Yiddish writers lauded and unknown; in “Have I Got a Story For You” a set of their stories receive their first English translations, giving readers new access to the experiences that shaped the lives of American Jews. Glinter has arranged the works according to five themes – immigration, the Old Country, and war foremost among them – and introduced them with short biographies of their authors. With pieces by writers including Isaac Bashevis Singer and Sholem Asch, the collection is a treat. (Also, the cover goes awfully well with pumpkin spice tea and candy corn. What could be nicer than that?)

3) Have a comedy snack with Rachel Dratch

November 6-14th the DCJCC plays host to a sampling of Israeli arts and culture, with events ranging from a workshop in the Israeli dance form Gaga to a book talk by author Meir Shalev. Highlights will include Sunday’s “Israel Story Live,” during which the hosts of the popular Israeli podcast will present a show focused on diverse, surprising stories of Israeli women, and Monday’s “Man-O-Manischewitz: How a Kosher Wine Became Big With the American Public,” in which Roger Horowitz will discuss the brand’s everlasting, somewhat incomprehensible appeal.

This week the Museum of Jewish Heritage hosts discussions of Jews engaged in two quintessentially American pursuits: sports and comics. Wednesday, November 2nd Olympic synchronized swimmer Jane Katz joins former New York Times sports contributors Robert Lipsyte and Gerald Eskenazi for “It Wasn’t Only Sandy Koufax: The Jewish-American Experience in Sports,” a discussion of the history of Jewish American athletes and their cultural impact. Thursday, November 3rd the Museum partners with the Anne Frank Center for Mutual Respect and the Jewish Book Council for “Ink Bleeds History: Reclaiming and Redrawing the Jewish Image in Comics,” which features a panel including graphic novelists and comic artists Amy Kurzweil, Miriam Libicki, and the creators of the online series “Radzyn.” Learn, laugh, and come away with some creative inspiration.

7) Speaking of Miriam Libicki, check out the rest of this week’s hot reads

Libicki’s first collection of graphic essays, “Toward a Hot Jew,” was released November 1st; it covers everything from dating in the Israeli military to the complicated intersections of black and Jewish identity. Libicki, creator of the long-running series of autobiographical comics, “jobnik!,” is an accomplished storyteller, and her first book is already attracting attention. Along with her book and Glinter’s, fill out your shelf David Cesarani’s posthumously published “The Final Solution: The Fate of the Jews 1933-1949,” a monumental, minutely researched tome on the decades that decimated European Jewry, and Nava Semel’s newly translated “Isra Isle,” a multi-part imagination about what might have happened if Jews had followed the intention of nineteenth-century visionary Mordecia Manuel Noah and settled New York’s Grand Island.