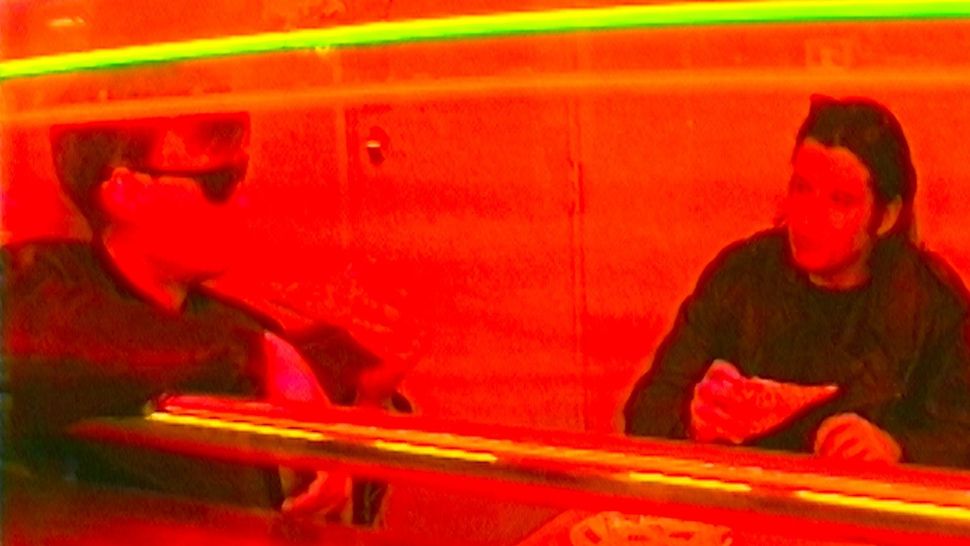 David Shapiro’s madeleine, the nostalgic bite that transports him back in time and space, is a slice of pizza made by a guy named Andrew Bellucci circa 1995.

Or maybe it’s a casserole, consumed in a StuyTown apartment building in 1973, part of a “reparation playdate” for when his schoolmate, Leeds Atkinson, called him a kike.

The two entrees are linked. In the early ‘90s, Atkinson and Shapiro — by then longtime friends — posed as the film crew for a food channel in a bid to eat as much pizza as they could, gratis. Their camera equipment came courtesy of The Wiz’s 30-day-return policy. The chutzpah came naturally. The duo called their pizza project “Eat to Win,” and awarded Bellucci, the media eager pie man who revived Lombardi’s legendary oven in 1994, their “golden slice” trophy.

“We were kind of bullshitting each other in equal measure,” Shapiro, a third-generation Lower East Sider, now living in Queens, said of their encounter with Bellucci. “As it turns out, he had some skeletons in his closet, big time.”

The last exchange Shapiro had with Bellucci before the new millenium was at Allenwood Federal Penitentiary, where the celebrated dough-slinger served out a sentence for embezzling from his former employer. With the scandal, Shapiro and Atkinson found a direction for their pizza film, but then, life got in the way.

Shapiro travelled to Peru to film “Keep the River on Your Right,” an Independent Spirit Award-winning documentary, co-directed by his sister Laurie Gwen Shapiro. Atkinson lost touch, started drinking heavily and ended up in France. And as the city they grew up in receded from view, the tapes of their pizza adventures gathered dust.

When Atkinson died in 2014 from health issues stemming from alcoholism, Shapiro decided to revisit the old footage and fill in the blanks of Leeds’ life. “Untitled Pizza Movie,” a seven-part documentary series premiering on Metrograph’s virtual cinema Feb. 26, is an elegy to a friendship. It’s also an anthropological dive into what Shapiro calls a once gloriously “gritty, shitty” city, since sanitized by corporate interests. Tracking Bellucci’s fall from grace and struggles for reinvention alongside Atkinson’s path to self-destruction, the series is as messy and pristine as a glistening slice from a coal-fired oven. Its ambitious ingredients should clash, but never do.

I spoke with Shapiro about pizza, the film’s long life cycle and what he sees in the tea leaves for a New York in the midst of yet another monumental shift. The following conversation has been edited and condensed for clarity.

PJ Grisar: In some ways this is a 30-year-old project. When did you decide to go back to these old tapes?

David Shapiro: When Leeds died. I decided to make a work about trying to actively remember somebody: a weird biopic, or a pizzamentary, or something in between. I knew that the pizza footage would be in there somewhere, and sometimes when you have something from a long time ago and you repurpose it later, it becomes reflective of the time. In fact, by intent, on some level, and by circumstance, it was a documentary of New York in the throes of gentrification. And it also has an old friendship. So there’s pizza. But there’s also those two things. 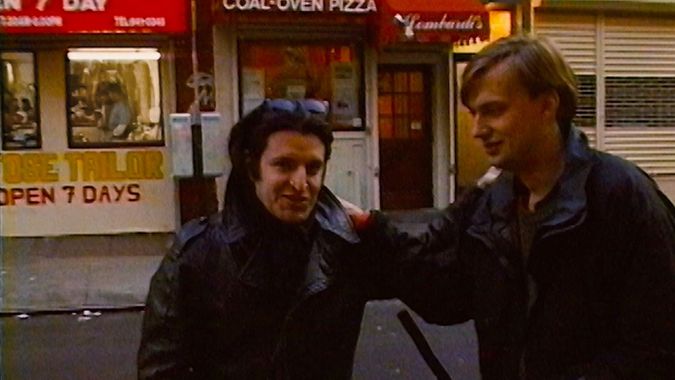 And that led you back to Bellucci.

It’s kind of frustrating when you go on a road trip of investigation and memory and there’s not much there. You kind of want to talk to somebody, so I thought, “If I can find somebody who we met in 1995, our worlds intersected once, but we lived in the same city at the same time, what would happen if I found him again 25 years later?”

Once we met him, he was a charismatic guy and honestly, the guy makes great pizza. We had eaten at dozens and dozens of places and this was by far the best stuff we had.

You see the Golden Slice you gave him twirling around the screen. There’s actually a huge amount of stuff in the movie. There’s conveyor belts of taxidermy birds, and books and albums and really niche artifacts going by on a lazy Susan. We see you at your storage unit. Is this all stuff you saved?

I don’t save absolutely everything, but I save a lot, and I started to represent it, laying it out, almost like memories. If I didn’t have something, I would source it on eBay. And I began to develop a few problems making this film. One is that I gained like 20 pounds eating pizza and then I developed an eBay problem, because I started to really take deep dives into finding the exact book. The exact object. Vintage.

It is kind of like a sculpture. It’s literally hundreds of objects. Over the course of the work you see thousands of books and records and objects that you know are meant to represent all the things somebody has learned and gleaned in their life. How do you represent someone in a visual way? The work started because when Leeds died, I started to think about this casserole from 1973 from our first lunch.

The friendship began with a slur.

He called me a kike. My mother was just like “that is not OK.” And she called his mother and I called it a “reparation play date” and that’s how we became friends. But what was interesting to me is that I didn’t remember it that way at first. I just thought of it as a sweet like “Oh, I remember the first time we had lunch and I remember this way it tasted.” Then the more I thought about it I realized, “That’s why we had lunch.” That’s the way memory works; you kind of push to the side the parts that you don’t really want to remember. 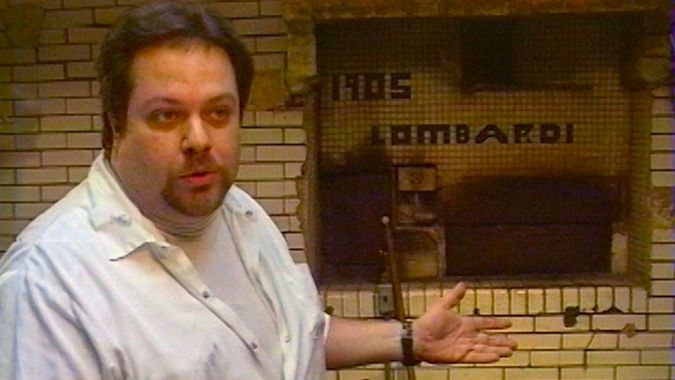 Andrew Bellucci from archival “Eat to Win Footage.” Shortly after this was filmed — amid a media circus surrounding his pizza — he was arrested for stealing hundreds of thousands of dollars from a law office where he worked previously. Courtesy of ©HoFu

Holding these threads together — you, Leeds, Bellucci — is how New York has changed. Obviously it’s changed in a crazy way since you stopped filming most of it. What do you think about this next phase and its impact?

I’m a secular Jew, but I feel there’s something very biblical about this moment, in terms of a recheck of both morals and profit and free market, unfettered capitalism and what it’s done to the city and who’s hijacked it — how and why — and where it’s going to go. I’m optimistic. But I’m not a Pollyanna. I mean, I think before COVID, this city was destroyed in a way. A series of neighborhoods in a middle class city became like a rich person’s playground. And it underscored the huge gulf between the haves and have nots. Everybody else had to keep going further and further out into the boroughs. I grew up in Manhattan. I don’t live there anymore. I live in Queens now. I feel like it’s a possibility to rethink it and to understand how messed up the direction it was going. Can we steer it back to a more human city?

You guys were really onto something. I see all these YouTube slice crawl series. “Eat to Win” feels like a precursor.

If I were a young person now, I’d probably be doing something like that, but there’s a different sense of how to do it and why you’re doing it now than it was then. Everything was word of mouth. So, if you wanted to do something or learn about something, you couldn’t Google it, you actually had to get out of bed and go there and look for it and find it and find people who know about a place. I’m happy to be part of the process, and also to have archived something that I think is gone.

You’re something of a conservator.

I am a New Yorker, and with all the good and bad that that means. People come here to invent themselves. But what happens if you’re from here? You kind of become possessive of the city and jaded to it. I also think it’s interesting that in a small city or a small town you want to get the hell out of there. In New York, you kind of want to make it as small as possible. You want to make it a small city, you want to make it a village, know the neighborhood and kind of never leave. This is a moment of a fork in the road. I think it could go either way. I think that greedy ugly hedge fund crap can come right back. But it’s also an opportunity to reboot. So let’s see what happens. I’m optimistic. It’s love and hate. I’m not going anywhere. I still love New York.