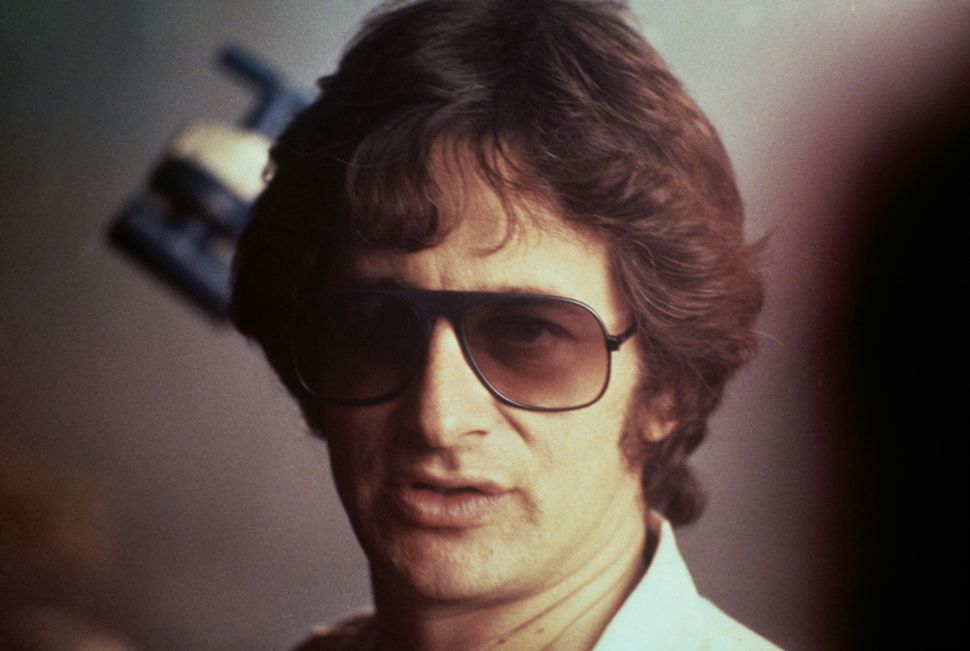 Steven Spielberg, circa 1982 By Getty Images

Let’s say you were to time travel to 1968 on a mission to keep a short film called “Amblin’” away from famed Universal executive Sidney Sheinberg. Upon your return to the future, you’d find the movie industry as we know it now and a massive chunk of our pop culture erased from existence. Just as Marty McFly started vanishing mid-”Earth Angel” at the Enchantment Under the Sea Dance, one fateful interaction was needed to get everything on track.

The moment that dialogue-less 26-minute opus about two hitchhikers — made by a geeky, celluloid-obsessed 20-year-old named Steven Spelberg — was seen by that then-vice president of Universal TV, everything changed.

Since the age of 12, Spielberg had built an impressive filmography of 8 mm sci-fi, western, and war epics that projected a cinematic craftsmanship well beyond his years. A poor student, he had been rejected by his dream film schools, UCLA and USC, but pursued his ideal education on the Universal lot — first as a visitor, intern and explorer while in high school, and then as a friend of Chuck Silvers, who worked in the editorial department at the studio.

It was Silvers who encouraged him to demonstrate to studio heads what he could do behind a camera—prestigious institutes of learning be damned. Cut to “Amblin,’” which made its way to Sheinberg’s desk.

The exec was floored.

“I looked at this film and I was very taken with it,” Sheinberg said in the 2017 HBO documentary “Spielberg.” “I had a very strong feeling that this was not your average young filmmaker.”

He immediately offered Spielberg a seven-year contract at Universal TV, making him the youngest major studio director in the history of Hollywood at the time, and setting him on his blockbuster-churning and Oscar-winning path. The deal would forever reshape the industry, ushering in a wave built on his unique blend of expert craft and commercial viability.

According to Spielberg, the most important relationship he’s had in the business began with Sheinberg telling him, “If you sign with us, I will support you as strongly in failure as I will in success.”

Inspired by Sheinberg’s crucial role in his success, he has spent his career “paying it forward” — recognizing the potential in young, inexperienced filmmakers, and mentoring many through their creative journeys, shaping a new Hollywood and modern entertainment along the way.

In 1973, just five years after that fateful meeting about “Amblin,’” Spielberg found himself on the other end of the desk when a hungry USC student named Robert Zemeckis rushed into his Universal office to present his graduate film, “A Field of Honor,” which he made with classmate and writer Bob Gale.

Energized by the young duo’s loud, chaotic, action-packed flick, Spielberg took to Zemeckis and Gale right away. As Spielberg continued to climb the industry ladder, the Bobs followed in his path, working in television before developing scripts for two projects: “I Wanna Hold Your Hand” and “1941.” The first became Zemeckis’ feature-length directorial debut, and Spielberg’s first executive producer credit. While it’s a great little movie, it wasn’t financially successful, and “1941,” which Spielberg helmed after “Close Encounters of the Third Kind,” ended up being his first major flop.

However, he didn’t give up on the two; he executive produced their next film, and when Zemeckis and Gale needed a home for a new time-traveling adventure idea, he invited them to make “Back to the Future” at Amblin Entertainment — the studio he established in the early 80s.

Perhaps no one embodies “student of Spielberg” better than Chris Columbus. Precocious, imaginative and driven, he first grabbed Spielberg’s attention as an NYU student with his film “I Think I’m Gonna Like It Here.” After college, while living in a mice-infested Manhattan loft, he got to work on an idea — inspired by a friend’s comment that “Since ‘Jaws,’ there hasn’t been a great monster movie.’” Six weeks later, he sent “Gremlins” off to his agent. Spielberg saw a copy of the screenplay on his secretary’s desk one day, read it, and in no time at all, the 23-year-old Columbus was in L.A. and set up in an office three doors down from Spielberg at Amblin, where he and his new boss punched up the script.

Spielberg helped Columbus turn “Gremlins” into the classic it is today by softening it from its much more twisted first draft. He suggested that little Gizmo, who was originally written to turn bad with the others, remain his cute and wide-eyed self as he had a sense that the audience would like him.

To direct the darkly hilarious creature feature, Spielberg hand-picked Joe Dante, whom he had previously hired to tackle what would be the standout segment in “Twilight Zone: The Movie.” Dante had made his initial mark with “Piranha” in 1978, a B-movie riff on “Jaws” that Spielberg loved. Sharing sensibilities, Spielberg was happy to give the Roger Corman alum a platform to showcase his Looney Tunes-infused flair — Dante’s subsequent output included the very Spielbergian “Explorers,” Amblin’s “Innerspace,” “The ‘Burbs” and “Gremlins 2: The New Batch.”

Columbus’ excitable energy matched Spielberg’s. While “Gremlins” was being made, the young scribe was typing away on his next project with Spielberg, “The Goonies,” which helped cement what many consider the “Spielbergian” tone. Fueled by all that he had learned from Professor Spielberg, including a gift for working with child actors, Columbus set off on his own adventures in directing and found global success with the two “Home Alone” films, “Mrs. Doubtfire,” and the first two “Harry Potter” entries; “Sorcerer’s Stone” carries a ton of his mentor’s influence, John Williams score and all.

As he began to explore heavy subject matter as a director, from “Schindler’s List” to “Saving Private Ryan,” Spielberg produced such films as “The Animaniacs,” “The Flintstones,” “Men in Black” and Dante’s “Small Soldiers.” He co-founded DreamWorks in 1994, a powerhouse studio that was responsible for “Antz,” “Shrek,” “Galaxy Quest,” “Gladiator,” “Meet the Parents,” “The Ring,” “Old School,” “Kung Fu Panda,” “How to Train Your Dragon” and “American Beauty.”

Spielberg originally considered directing “American Beauty,” having loved the off-beat satirical script, but he soon realized he wasn’t the man for the job and hired an at-the-time-unknown director named Sam Mendes — based on a stage production of “Oliver!” that he had directed. The two recently reteamed on “1917,” which DreamWorks produced.

If anything, the emergence of gray hair made Spielberg double down on his mentor role, with one important difference: today’s younger filmmakers have been raised on his work. The most prominent recent student is J.J. Abrams, whose “Super 8,” produced by Spielberg, is a boldfaced love letter to Amblin.

“Maybe the greatest gift Sid Sheinberg ever gave me was the moral urge to be a mentor,” Spielberg said at Sheinberg’s memorial service in 2019. “Every time I discovered a new director, a new actor, a new writer, cinematographer, film editor, set designer, composer, I still to this day see Sid as the partner of all those choices of all of those big breaks.”