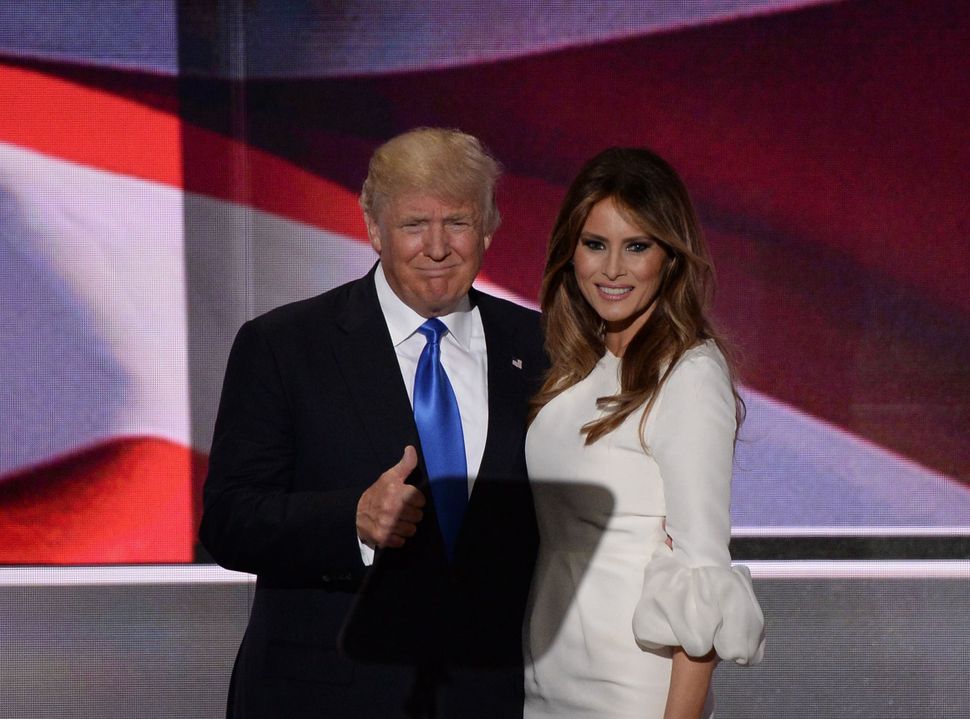 According to the convention website, “The Obama years have delivered anemic economic growth, the lowest labor-force participation rate in 38 years, and job-killing regulations and legislation like Obamacare. These policies are crushing middle-class families, and a Hillary Clinton presidency would merely be an Obama third term that would deliver the same poor results. Donald Trump is a successful businessman with a solid record of creating jobs and the experience we need to get America’s economy up and running … and get Americans working again.”

Today’s main program will begin at 5:30 PM EDT, but we will be updating the liveblog periodically throughout the day. If you missed Day 1 of the Liveblog, you can find it here.

Thanks for following Tuesday’s liveblog of the Republican National Convention. Check in again tomorrow for more updates

10:55 PM Sajid Tarar, from American Muslims for Trump, gives the closing blessing asking for a president capable of keeping Americans safe from terrorism — which Trump argues he will do through a ban on Muslim immigration. Read why prominent Jewish groups disagree.

10:35 PM Dr. Ben Carson attacks Hillary Clinton as dangerous for the future of America. Also, Carson name-checks someone he cites as Clinton’s mentor: Jewish community organizer Saul Alinsky. While he mainly criticizes Alinsky for “taking God out of our lives” and, apparently, celebrating Lucifer, references to Alinsky followed Jewish candidate Sen. Bernie Sanders earlier this year. In years past, Alinsky references were somewhat of an anti-Semitic dogwhistle. 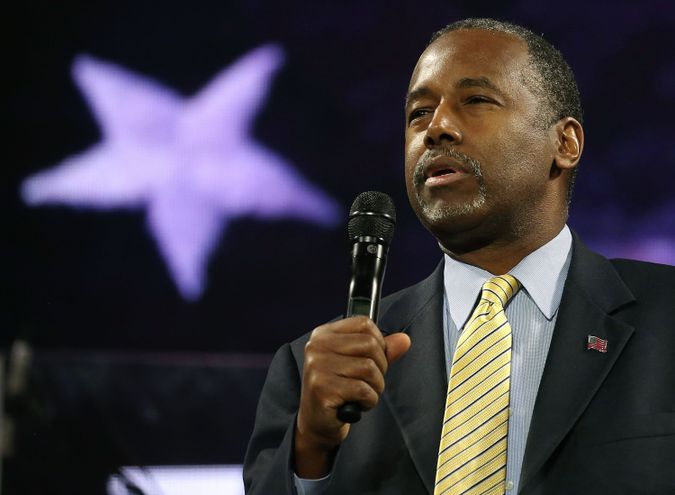 Carson has had his own problems with fraught imagery in the past.

10:20 PM Trump’s son, Donald Trump Jr., presents his father as the workingman’s candidate, who understands blue-collar work. Additionally, Trump Jr. claims he and his family learned more from worksites than from their MBA programs, and claims his father will work to end loopholes for the wealthy and “elite crony capitalism.”

However, this week New York Magazine reported the Trump campaign plans to appoint a Goldman Sachs banker to the Treasury.

10:00 PM Donald Trump’s daughter, Tiffany, tells stories about report cards and calls from her father. Tiffany’s speech attempts to humanize the Donald in the way many had hoped Melania Trump would in her now-infamous speech from Monday night. 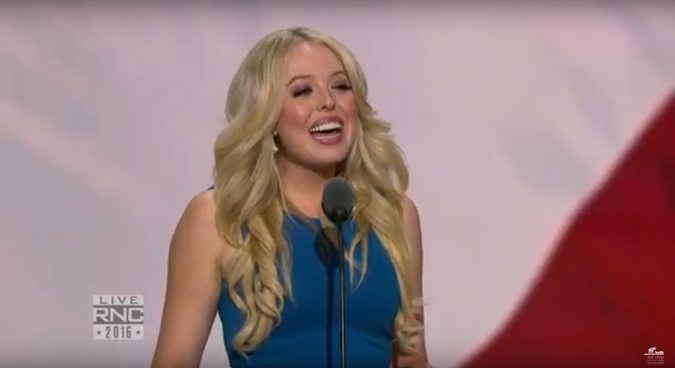 9:40 PM New Jersey Gov. Chris Christie takes on his former role of federal prosecutor and asks the crowd to judge Hillary Clinton’s actions based on the “facts” as he presented them. Their response? Overwhelming chants of “Lock her up!” 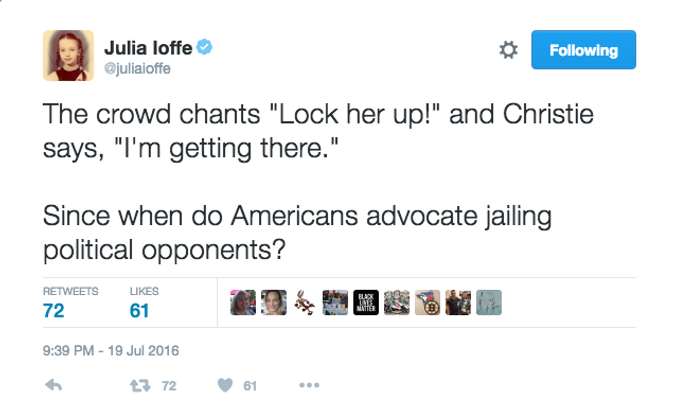 9:30 PM Speaker of the House Paul Ryan, who stood on the RNC stage in 2012 as the vice presidential nominee, seems to address the massive party infighting over Trump’s nomination: “Democracy is a series of choices, and we’ve made our choice.” Ryan declares the Obama years “almost over,” and challenges the idea that America wants a “third Obama term.” He said, “the Clinton years are way over. 2016 is the year America moves on.”

Obama’s approval rating currently sits at 49 percent, according to Gallup.

Ryan ends with a call for party unity heading into the general election this November, which elicits boisterous applause from a convention audience that witnessed a stifled #NeverTrump attempt Monday.

9:06 PM Trump addresses the convention live from Trump Tower in New York, thanking the delegates for the nomination and promising to “win Ohio and the presidency.” 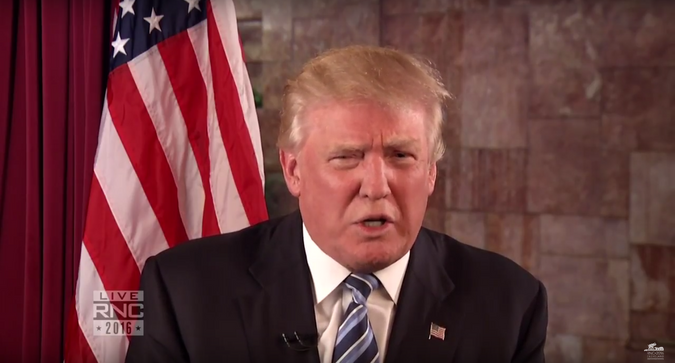 9:00 PM Wisconsin Sen. Ron Johnson calls out his Jewish opponent former Sen. Russ Feingold as weak on security. As of June, the race for Johnson’s seat was a close one.

8:50 PM Former U.S. Attorney General Michael B. Mukasey slams Hillary Clinton as unfit to be president, citing scandals like Benghazi and her private email server as disqualifying factors (despite Tuesday’s theme being about jobs). His message to Clinton? “No way, Hillary. No way on Earth.” 8:40 PM Arkansas Gov. Asa Hutchinson calls Trump “the straight-talking, transparent leader we need,” and he says Trump is the leader for our time. Forward Editor-in-Chief Jane Eisner can think of a time more suited for Trump’s type of leadership:

8:12 PM Indiana Gov. Mike Pence is formally nominated to run as Trump’s vice president. Pence is accepted in a voice vote, which is a surprisingly enthusiastic yes. Now that it’s official, will Pence give Trump a boost on Israel? 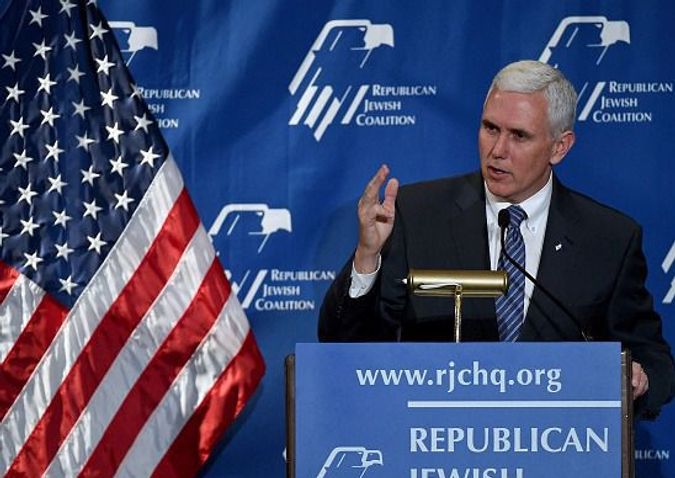 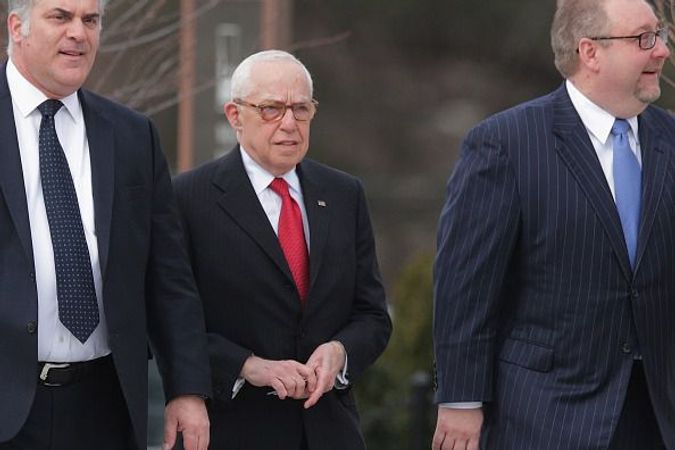 Michael B. Mukasey Image by Getty 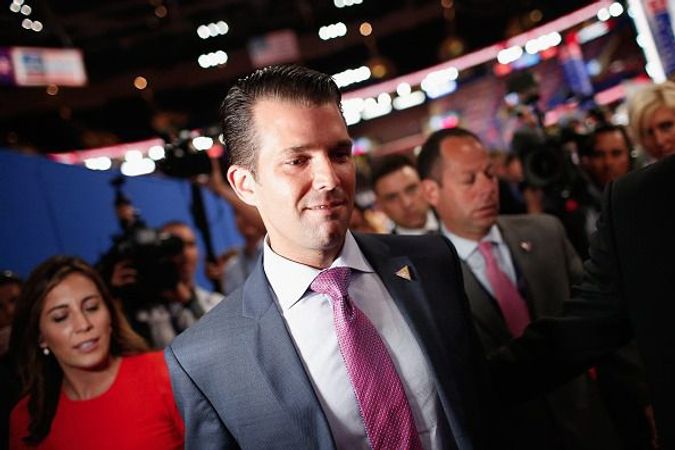 6:50 PM The State of Michigan, with a total of 59 delegates, has passed on the first ballot at the Republican National Convention. Although their delegates are bound to Donald Trump (25), Sen. Ted Cruz (17), and Ohio Gov. John Kasich (17), the delegates can wait to cast their vote later in the roll call. According to The Atlantic, Michigan’s delegation passed in order to allow the New York delegation to make Trump’s nomination official.

We’re getting into states passing so New York (Donald Trump Jr.) can clinch it for Trump. Michigan passed #RNCinCLE #gopconvention

The Atlantic is also reporting that despite the D.C. delegation allotting votes for Sen. Marco Rubio and Gov. John Kasich, the RNC has recorded all 19 votes for Trump.

6:00 PM Following three nomination speeches, the state-by-state roll call to vote in Donald Trump as GOP nominee begins. Are Jewish Republicans still in crisis mode, or are they starting to accept the inevitable?

5:40 PM The convention is already running a little behind schedule, but Reince Priebus is set to call the convention to order soon. Tonight’s big name speakers include Speaker Paul Ryan (who just this month slammed Trump for his Star of David debacle) Speaker Paul Ryan on Day 2 of the RNC. Image by Getty Images 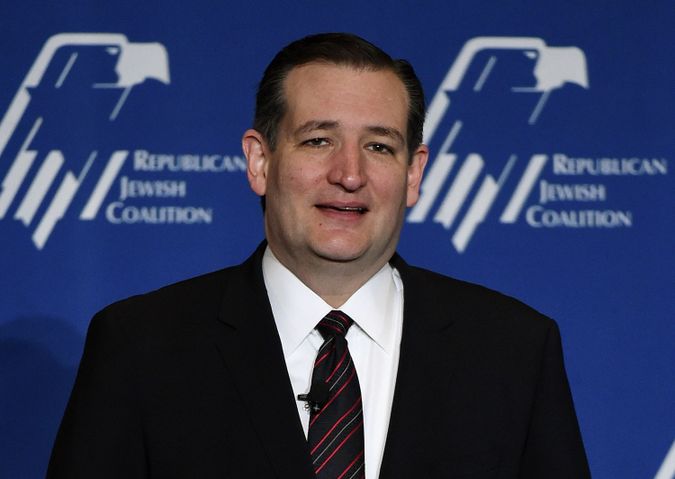 Newt Gingrich (who also chidedTrump for his Star of David debacle) Tiffany Trump, Donald Trump Jr., and a video of “Hil-LIAR-y”. 12:00 PM Jewish Republicans are somewhat hard to find at the RNC convention in Cleveland. Still, there some big names no one wants to miss; our Washington bureau chief Nathan Guttman tells us seven to watch.

11:10 AM Our Editor in Chief Jane Eisner was live on The Brian Lehrer Show, discussing the GOP’s platform. Here are some of the highlights:

Our @Jane_Eisner on @BrianLehrer: The #RNCinCLE platform is in line with the “most right wing elements in the Israeli government.”

Our @Jane_Eisner on @BrianLehrer: Netanyahu hasn’t gotten along well with Obama, but “not clear where his gvt is siding” in current election

Our @Jane_Eisner on @BrianLehrer: “The perception by Israelis is that @HillaryClinton is more hawkish than Obama.”

10:30 AM: Potential speech plagiarism scandal aside, Melania looked fierce last night. Our Assimilator editor Maia Efrem spoke with the Trump’s Israeli hair stylist about his experience working with the family. Melania Trump caused an outcry heard round the internet when many noticed that large portions of her speech had been lifted from Michelle Obama’s 2008 DNC Convention speech. There may be many reasons why Donald the Great married his daughter Ivanka to a modern prince of the Jews, Jared Kushner. But Jonathan Levi argues that Jared Kushner is the ‘Court Jew’ of Donald Trump’s Realm. After Rabbi Lookstein declined to deliver the opening convention prayer amid controversy, a little known Cleveland rabbi delivered the prayer instead. Our opinion writer Bethany Mandel posits that Rabbi Haskel Lookstein Would Have Schooled Donald Trump at the Republican Convention — If You’d Let Him. Today’s liveblog will be updated by Laura E. Adkins, the Forward’s Contributing Network Editor, and Drew Gerber, Forward News Fellow. Send tips to adkins@forward.com and tweet at @laura_e_adkins or @dagerber.